Marsel van Oosten slipped and stumbled over logs, struggling to lug his camera gear through the verdant mountain forests of China.

Undeterred, he pressed on, finally capturing a stunning photo of a pair of golden snub-nosed monkeys, an eye-catching shot that would win him £10,000.

Breathtaking photos of the natural world can bring attention to endangered species, highlight important environmental issues, or simply fascinate us as they reveal the world’s bizarre and beautiful creatures.

Other images that made the list of winners and finalists this year depict a mother gorilla mourning her dead babe, owls that found refuge in a rusty urban spot, and a Caribbean flamingo behind the steering wheel of a car.

Take a look at these stunning photos of the world’s most fantastic beasts from the 2018 contest.

Van Oosten, the grand-prize winner, is a professional nature photographer from the Netherlands who runs a photography tour business with his wife. He nabbed this photo of a “golden couple” in the Qinling Mountains of China. 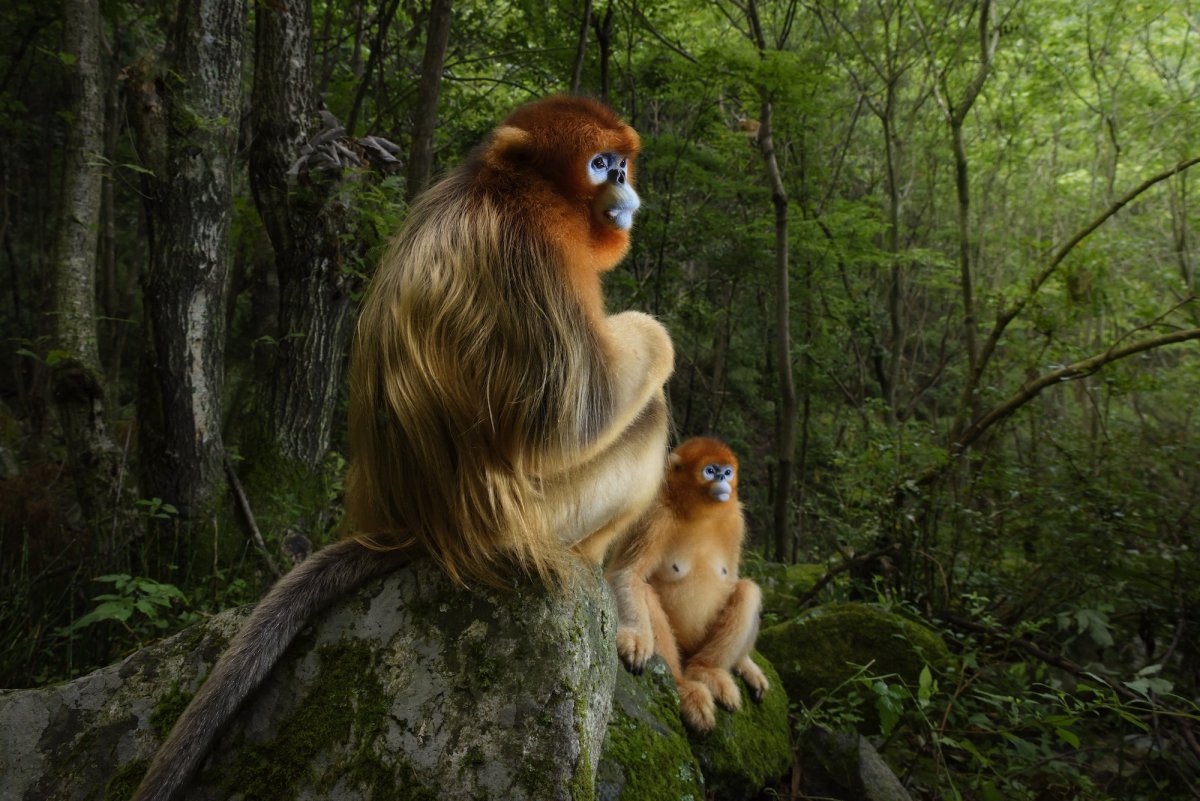 Less than 4,000 golden snub-nosed monkeys remain in the snowy mountains of west-central China. Human settlement, as well as logging and hunting, have pushed the furry, blue-nosed creatures towards the brink of extinction.

“Many have been pushed into high-altitude isolation, where they leap across branches, traverse icy rivers, and weather long winters at nearly 10,000 feet, shielded by that coveted coat,” according to National Geographic.

Van Oosten had a tough time keeping up with the monkeys as they hopped from tree to tree, but after some slips and stumbles, he captured this shot of a pair resting.

Underwater photographer Tony Wu was tickled to meet this Asian sheepshead wrasse off the coast of Japan’s Sado Island. The fish’s forehead reveals the “burning desire of a male in love,” he said.

This Asian sheepshead wrasse uses its bulbous red forehead to attract females. If there aren’t enough men around, older female wrasse can also turn into males. They grow testicles, show off their big pink foreheads, and act aggressive.

The image was highly commended in the contest, and the underwater photographer hopes his work inspires others to appreciate and protect the world’s oceans.

Normally, the fish thrives in Sargassum seaweed habitats, where it stalks and captures prey. But with plastic now covering the world’s oceans in a “seventh continent” of trash, those traditional hunting methods aren’t always possible.

More than 90% of the world’s plastic never gets recycled, and instead ends up in landfills or out in nature.

Near the top of the world, in Franz Josef Land, Russia, polar bears rule the ice.

‘A Bear on the Edge,’ Sergey Gorshkov, Russia.

Russian photographer Sergey Gorshkov was highly commended for this shot, which he took at the world’s northernmost archipelago, some 560 miles from the North Pole.

When sea ice melts in the summer, polar bears feed on whale carcasses to fatten their 800-pound-plus bodies for the winter.

Photographer Frans Lanting won a Lifetime Achievement Award in this year’s contest. This shot shows a watering hole during dry season in Botswana.

“The image is my homage to the primeval qualities of southern Africa’s wilderness, the grandeur of elephants, and the precious nature of water in a land of thirst,” Lanting said.

The photographer has been capturing impressive wildlife shots for three decades.

“I like to get eye to eye with the animals I photograph and portray them as individuals,” he added.

In Indonesia, macaque monkeys are put to work in street shows. The animals often work long hours riding bikes or dancing, isolated from crucial social interaction with other monkeys.

Biologist and wildlife photographer Joan de la Malla snapped this shot of a macaque named Timbul as the monkey raised a paw to adjust an uncomfortable mask.

Bob the flamingo also spends his life in close contact with humans — he is an ambassador for a Caribbean animal rehab center. The bird is pretty comfortable behind the wheel.

Veterinarian Odette Doest rescued Bob after he flew into a hotel window on the island of Curaçao.

Because of his injuries and his familiarity with people, the bird can’t safely return to the wild. So instead, Bob travels around as an ambassador for Doest’s conservation charity and wildlife rehabilitation center, called Fundashon Dier & Onderwijs Cariben (FDOC).

Doest’s cousin, photographer Jasper Doest, captured this shot of the flamingo sitting in her lap. It was highly commended in the contest.

Kuhirwa, a mountain gorilla, lives in Uganda’s Bwindi Impenetrable National Park. After a few weeks of sadness, she gave in and started eating the baby’s remains.

After climbing 2,300 feet in the forests of Bhutan, setting up eight camera traps, and waiting 23 days, photographer Emmanuel Rondeau finally got a close-up shot of a tiger.

In Bhutan, tigers are making a comeback; the government has set up corridors for the animals to travel from one national park to another undisturbed.

Estimates suggest there are more than 100 tigers living in the wild in Bhutan now, nearly a third more than a decade ago.

“Bhutan is one of 13 tiger countries that committed to doubling the world’s wild tigers by 2022,” according to the World Wildlife Fund.

Rondeau’s image was highly commended by the contest judges.

Photographer Cristobal Serrano used a drone to spy these seals in one of their favourite resting spots in the Errera Channel of Antarctica.

Crabeater seals mate, eat, and sleep atop ice floes like this.

The seals feast on so much krill sheltering under the ice floes that their excrement turns red.

Serrano won the contest’s “animals in their environment” category with this image.

Kids also took some impressive wildlife shots this year. Arshdeep Singh, who started taking pictures when he was six, won the 10-and-under category for this shot of a pair of owls. 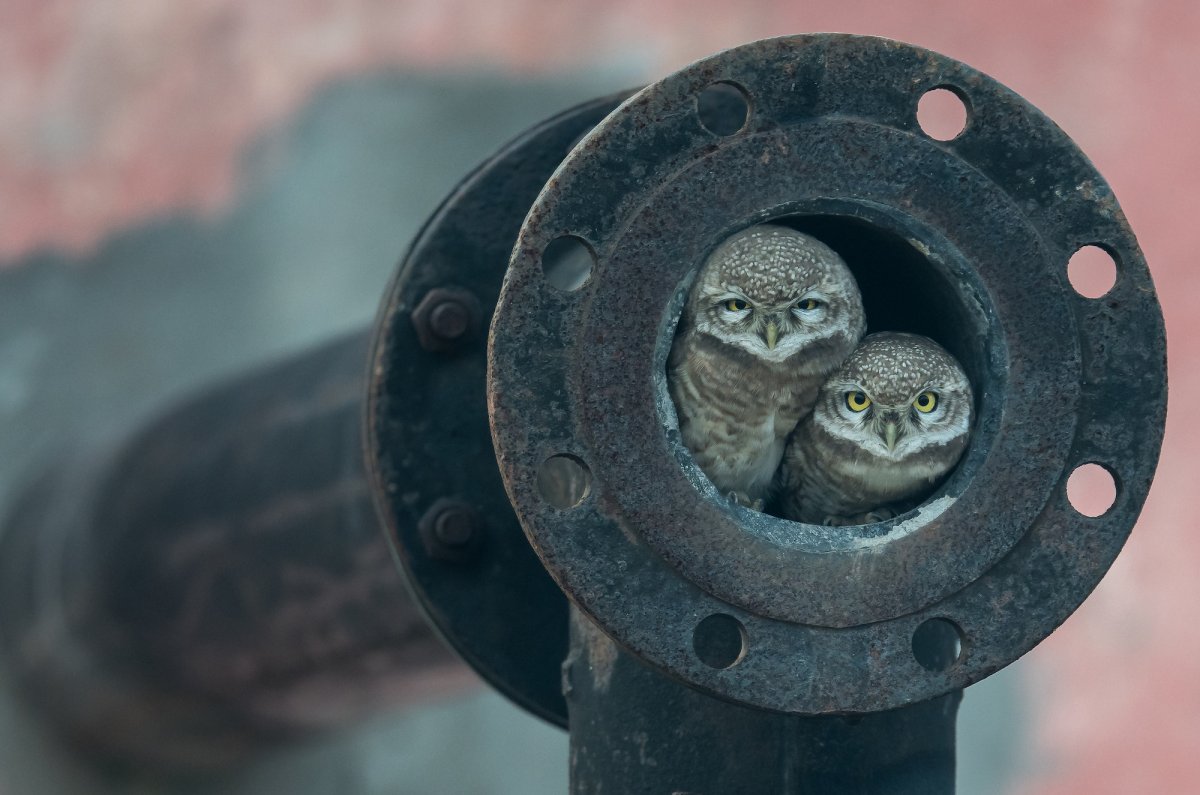 While driving through the city of Kapurthala, Singh spotted these two owls in a waste pipe from the car window. He asked his father to stop the car so he could kneel on the seat and get this shot, resting his camera on the half-open window.

Seventeen-year-old Cameron McGeorge has been building drones with his dad for five years, in the hopes of glimpsing whales from above like this.

McGeorge’s shot shows a humpback whale mother, her newborn calf, and a male suitor out for a cruise near Foa, Tonga.

The three whales are part of an isolated and endangered breeding group called “the Tongan tribe,” the Natural History Museum said.

The image was highly commended in the contest.

Carlos Perez Naval won the 11- to 14-year-olds category with this morning shot of a sleepy long tailed duck in Norway’s Barents Sea.

The area is home to one of the largest seabird communities in the world.

Naval, who has been taking pictures since he was five years old, slipped out of his boat and into a floating hide to get this shot.

The grand-prize winner of the museum’s Young Wildlife Photographer of the Year contest spotted an extremely elusive animal: an African leopard. 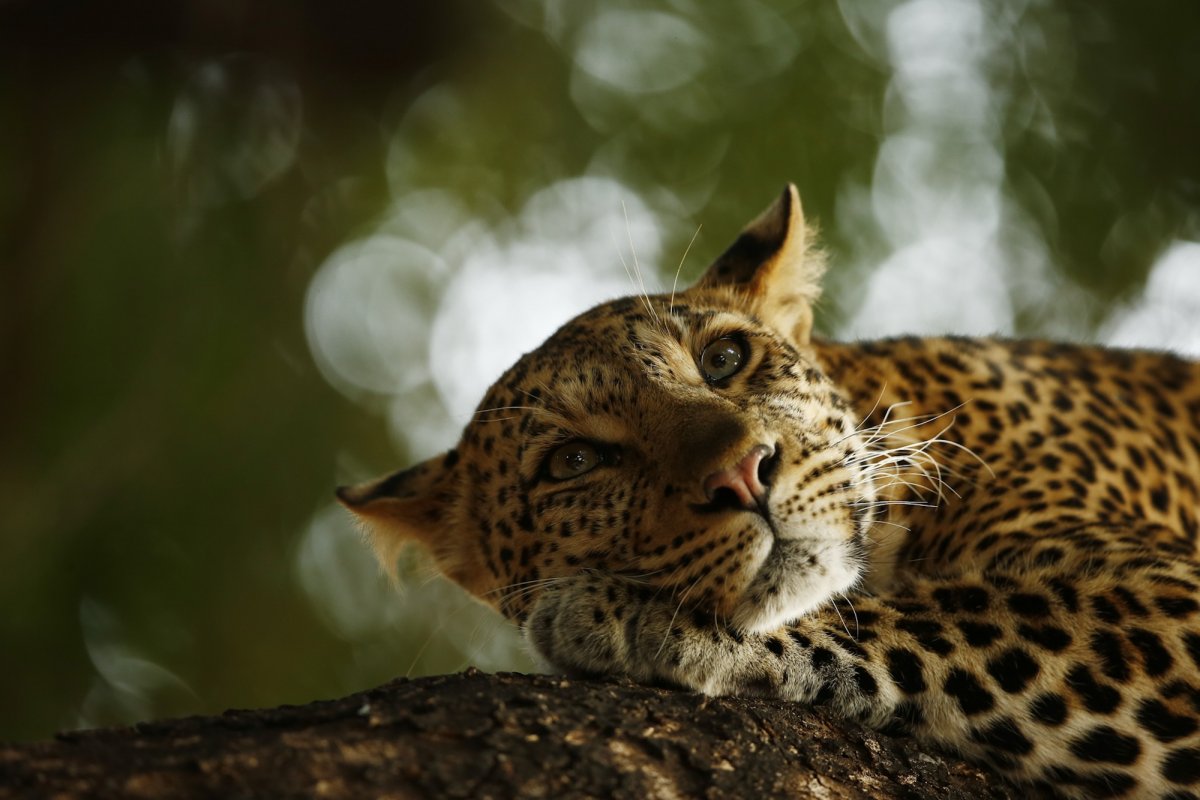 South African photographer Skye Meaker, who’s been snapping photos since he was seven, spent hours tracking leopards through the Mashatu Game Reserve of Botswana before he nabbed this shot.

Even though leopards are native to 35 African countries, the nocturnal hunters are notoriously tough to spot.

This female leopard suffered a leg injury, leading guides to name her Mathoja, or “the one that walks with a limp.”

This Supposedly Rare Ancient Fossil Was Actually Made by Something Much More Recent
Astronomers Find What May Be a Habitable World 31 Light-Years Away
New Prototype Device Generates Hydrogen From Untreated Seawater
Ancient Goo Spills The Secrets of How The Egyptians Mummified Their Dead
A Hidden Food Web Exists in The Desert, And It Thrives on Death