Scientists have discovered what could be some of the very earliest animal trails left on the surface of Earth. The finding dates back to around half a billion years or so, and it could finally reveal more about this distant part of history, and the very first moving organisms.

What makes the finding particular special is that the fossil of the animal that made these marks has been found alongside its trail. In previous research, some guesswork had been required to figure out what sort of critters might have left evidence of their journeys.

The uncovered fossils include both the trails, and the tiny bugs called Yilingia spiciformis (or “spiky Yiling bug”, Yiling  being the nearest Chinese city to the discovery site). These millipede-like creatures would have been up to 10 cm or 4 inches long. 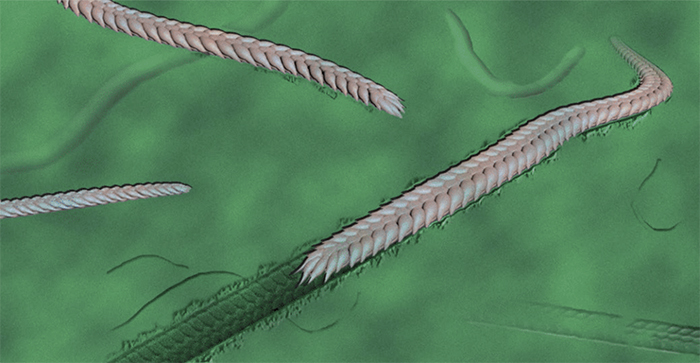 “This discovery shows that segmented and mobile animals evolved by 550 million years ago,” says geoscientist Shuhai Xiao, from the Virginia Tech College of Science. “Mobility made it possible for animals to make an unmistakable footprint on Earth, both literally and metaphorically.”

The researchers who made the discovery believe this find might be even more significant – it could represent the first known example of animals making decisions. Yilingia spiciformis might have been moving away from or towards something, perhaps due to a sophisticated central nervous system, though more research will be needed to be sure of that aspect.

That the bug had a ‘head’ and a ‘tail’, and was made up of segments, suggests it knew the direction it was going in as it travelled through the primordial ooze.

Further examination of the fossil showed the animal rested along the way – perhaps it wasn’t all that used to taking trips – while leaving trails up to 608 mm or 24 inches long.

The finding backs up a previous hypothesis that creatures first evolved the ability to move around intentionally at some point during the Ediacaran Period, 635-540 million years ago.

It marked the dawn of the bilaterians – bilaterally symmetrical animals with segmented bodies and control over their movements, thought to have appeared at this time. Most animals, including humans, are bilaterians.

Of course, once you can propel yourself forward in a direction of your choosing, that’s a big evolutionary advantage, one that us humans are still benefiting from today.

“[Bilaterians] ability to shape the face of the planet is ultimately tied to the origin of animal motility,” says Xiao.

It’s no exaggeration to say that life on Earth was never the same again after motility was developed – organisms being able to move on their own, with their own energy.

This superpower helped lay the foundations for the explosion of life during the Cambrian Period, 541-485 million years ago.

That’s why scientists are so excited about what they’ve managed to find here: it’s one of the first signs of the change in life on Earth that has since had an influence on almost every part of the way our society works today.

“We are the most impactful animal on Earth,” says Xiao. “We make a huge footprint, not only from locomotion, but in many other and more impactful activities related to our ability to move.”

“When and how animal locomotion evolved defines an important geological and evolutionary context of anthropogenic impact on the surface of the Earth.”

A 17th-Century Aristocrat Had a Crafty Secret For Keeping Her Teeth
Archaeologists Find Hidden Ruins of ‘Complete’ Roman-Era City in Egypt
‘Extraordinarily Close’ Asteroid About to Zoom Past Earth, NASA Says
Mysterious Medieval City in Africa Had a Genius System to Survive Drought
Could ‘The Last of Us’ Ever Happen? The Real Risks of a Fungus Pandemic