Sam Van Aken grew up on a family farm before pursuing a career as an artist. Now he works as an art professor at Syracuse University, but his most famous achievement – the incredible Tree of 40 Fruit - combines his knowledge of agriculture and art.

In 2008, Van Aken learned that an orchard at the New York State Agricultural Experiment Station was about to be shut down due to a lack of funding. This single orchard grew a great number of heirloom, antique, and native varieties of stone fruit, and some of these were 150 to 200 years old.

To lose this orchard would render many of these rare and old varieties of fruit extinct. So, to preserve them, Van Aken bought the orchard, and spent the following years figuring out how to graft parts of the trees onto a single fruit tree.

Working with a pool of over 250 varieties of stone fruit, Van Aken developed a timeline of when each of them blossom in relationship to each other and started grafting a few onto a working tree’s root structure.

Once the working tree was about two years old, Van Aken used a technique called chip grafting to add more varieties on as separate branches. This technique involves taking a sliver off a fruit tree that includes the bud, and inserting that into an incision in the working tree. 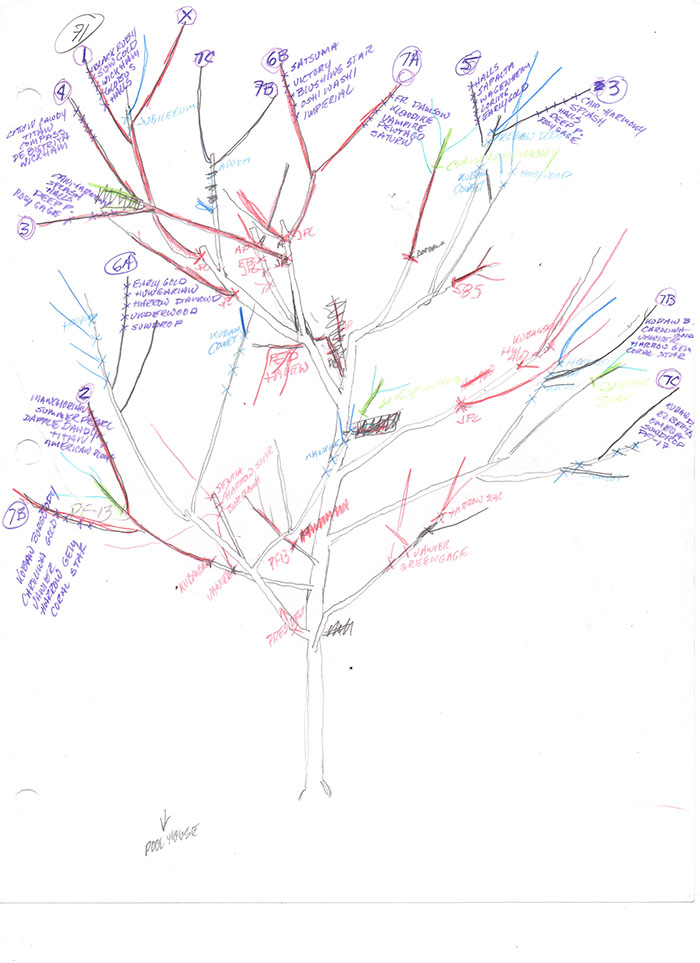 It’s then taped into place, and left to sit and heal over winter. If all goes well, the branch will be pruned back to encourage it to grow as a normal branch on the working tree.

After about five years and several grafted branches, Van Aken’s first Tree of 40 Fruit was complete.

It actually looks like a normal tree for most of the year, but in spring the plant reveals a gorgeous patchwork of pink, white, red and purple blossoms, which turn into an array of plums, peaches, apricots, nectarines, cherries and almonds during the summer months, all of which are rare and unique varieties. 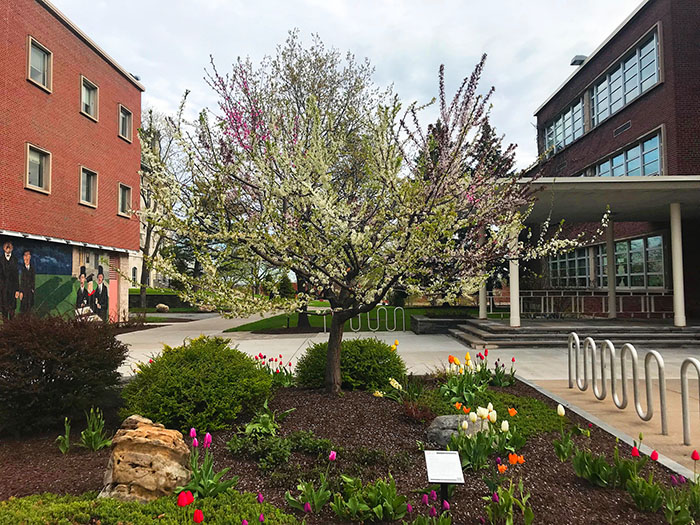 A young Tree of 40 Fruit in a public space (Krista Kennedy/Flickr/CC BY-NC-SA 2.0)

Not only is it a beautiful specimen, but it’s also helping to preserve the diversity of the world’s stone fruit. Stone fruits are selected for commercial growing based first and foremost on how long they keep, then how large they grow, then how they look, and lastly how they taste.

This means that there are thousands of stone fruit varieties in the world, but only a select few are considered commercially viable – even if they aren’t the best tasting, or most nutritious ones.

According to listings on Van Aken’s website, there are at least 20 such trees planted by Van Aken so far, and they can be found in museums, community centres, and private art collections around the US.

Of course, the obvious question that remains is what happens to all the fruit that gets harvested from these trees? As Van Aken told Lauren Salkeld at Epicurious in 2014:

“I’ve been told by people that have [a tree] at their home that it provides the perfect amount and perfect variety of fruit. So rather than having one variety that produces more than you know what to do with, it provides good amounts of each of the 40 varieties.

“Since all of these fruit ripen at different times, from July through October, you also aren’t inundated.”

You can learn more about these trees and read the rest of the interview here.

A version of this article was originally published in September 2014.

This plant lurks underground to trap prey in a way we’ve never seen before
These newly discovered viruses may have shaped the rise of complex life on Earth
The Large Hadron Collider is about to ramp up to unprecedented energy levels
If your kid suddenly loses the plot mid-conversation, this could be the reason
Physicists are startled by this magnetic material that ‘freezes’ when heated