While many people’s reaction to big hairy spiders is usually “AHHH”, you’ve got to admit, this spider’s odd-looking back appendage does look rather amusing. The peculiar and previously undocumented protrusion belongs to the tarantula Ceratogyrus attonitifer found in Angola, Central Africa.

While scientists have observed related species of baboon spiders with a back bulge before, they’ve never encountered any with a horn quite this large, and, uh, swollen.

While the thing in the cover photo does look deflated, it is a photo of a deceased specimen whose horn shrivelled as a consequence of the preservation process, entomologist Ian Engelbrecht from the University of Pretoria in South Africa told ScienceAlert.

“In life the horn is quite turgid, and much larger.” “What the purpose is, is an absolute mystery,” Engelbrecht said.

Engelbrcht and his colleague John Midgley from Rhodes University in South Africa encountered this species, previously unknown to science, while exploring for National Geographic’s Okavango Wilderness Project. This project aims to identify the biodiversity in the entire Okavango catchment of Angola, Namibia and Botswana, to inform sustainable conservation efforts.

Midgley told ScienceAlert that apart from the tarantula they also found other potentially new-to-science species, including two other spiders, a hover fly and a dung beetle.

“These need further study to confirm their status though,” Midgley explained.

The researchers named the tarantula C. attonitifer; in Latin -fer means “bearer of” and attonit- stands for ”astonishment”.

“No other spider in the world possesses a similar foveal protuberance,” the researchers write in their paper. Well, none that we known of for sure.

In the related spider species with smaller horns, Engelbrecht suspects the back protrusion “might have something to do with the muscles that operate the sucking stomach.” But the entomologists are not entirely sure.

“Spiders digest their prey externally, dissolving it into a kind of ‘bug soup’ in their mouth before ingesting it. The sucking stomach acts like a little pump that sucks the soup through the spider’s oral cavity and onwards into the rest of the digestive system,” Engelbrecht explains.

“The horn possibly allows those muscles to be larger and more efficient. In this new species though, the horn serves a different function as it is not solid and muscular as in other species.”

The local people of Angola are familiar with C. attonitifer and call it “Chandachuly” in their Luchazi language.

“They mention that it is not highly venomous, but dangerous, even life threatening, as the bites can lead to infection and medical access is limited,” Midgley recalls. ”[The tarantulas] are said to prey mainly on insects.”

They chow down on these bugs with their beautifully fierce mouths, adorned with alarm-red setae (invertebrate bristles) like fuzzy nightmare lips, beneath horrifying chelicerae – the dark needle-fangs they use to inject their poison into their prey. 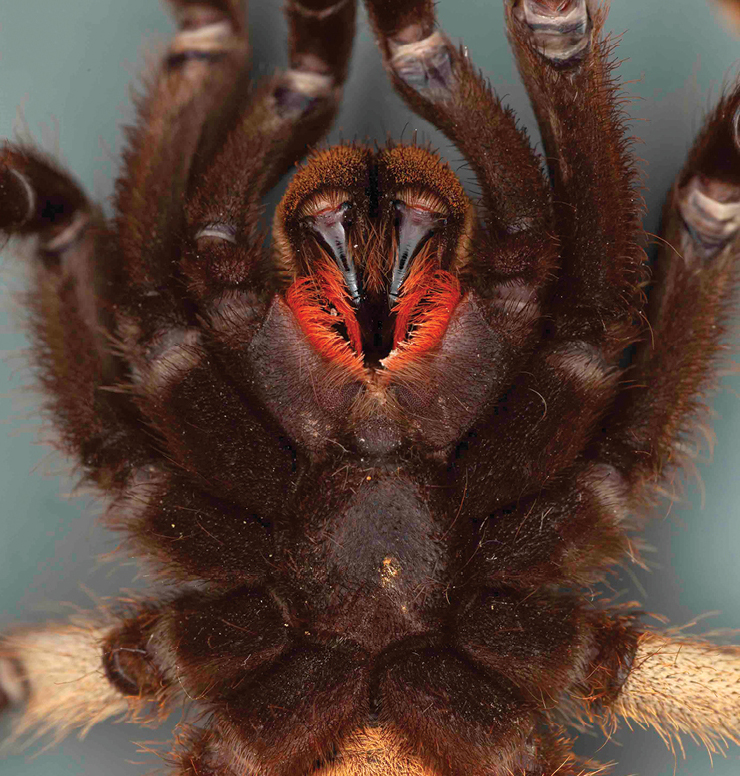 These little fellows can also be quite feisty when provoked. The researchers found the spiders would “enthusiastically” attack anything they poked into their burrows – a completely understandable tactic, given most things entering would likely be a tasty snack or want to make a snack out of them. Midgley and Engelbrecht have formally described this strange species in African Invertebrates.