Animals have been hibernating for a long, long time, a new study shows. Researchers have analysed 250 million-year-old fossils and found evidence that the pig-sized mammal relation, a genus called Lystrosaurus, hibernated much like bears and bats do today.

Finding signs of shifts in metabolism rates in fossils is just about impossible under normal conditions – but the stout, four-legged Lystrosaurus had a pair of tusks that grew continuously during its life, leaving behind a record of activity not dissimilar to tree rings in a trunk. 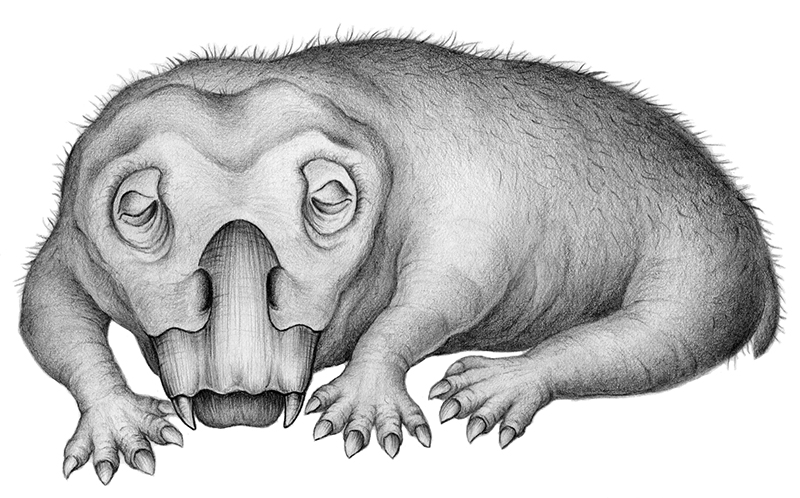 How Lystrosaurus may have looked while hibernating. (Crystal Shin)

The marks match up with similar depositions in the teeth of modern day animals that hibernate at certain points during the year. It’s not definitive proof that Lystrosaurus hibernated, but it’s the oldest evidence of it we’ve found to date.

“Animals that live at or near the poles have always had to cope with the more extreme environments present there,” says vertebrate palaeontologist Megan Whitney, from Harvard University. “These preliminary findings indicate that entering into a hibernation-like state is not a relatively new type of adaptation. It is an ancient one.”

The hibernation state, or torpor, may well have been essential for animals living near the South Pole at the time. Though the region was much warmer in the Triassic period, there would still have been big seasonal variations in the number of daylight hours.

It’s very possible that Lystrosaurus wasn’t the only hibernating animal of the time, and some of the dinosaurs that came afterwards may well have hibernated too. The problem is that most species of the time didn’t have continuously growing tusks or even teeth.

“To see the specific signs of stress and strain brought on by hibernation, you need to look at something that can fossilise and was growing continuously during the animal’s life,” says biologist Christian Sidor, from the University of Washington. “Many animals don’t have that, but luckily Lystrosaurus did.”

There’s plenty that this could teach us about the evolutionary history of species, lending support to the idea that a flexible physiology – being able to adapt bodily functions to suit the seasons – may be vital to surviving periods of mass extinction.

Scientists continue to discover more about how hibernation works and how it can be triggered in animals. If we can figure out how to get the same biological trick working in humans, it might give us new ways of fighting disease.

Further studies will be able to look in more detail at the question of whether or not the Lystrosaurus was able to enter a deep state of torpor, but this new analysis is already drawing some interesting parallels that span hundreds of millions of years.

“What we observed in the Antarctic Lystrosaurus tusks fits a pattern of small metabolic reactivation events during a period of stress, which is most similar to what we see in warm-blooded hibernators today.”

The research has been published in Communications Biology.

Eerie Video of Bizarre Sheep Phenomenon Has The World Running in Circles
Expert Proposes a Method For Telling if We All Live in a Computer Program
What Would Dinosaurs Look Like Today If They Never Went Extinct?
We Finally Know How Black Holes Produce The Most Brilliant Light in The Universe
Volcanoes May Have Transformed Venus Into a Blistering Hellscape