An extinct ‘horned’ crocodile that once called Madagascar home has finally found its place on the tree of life, according to a new study of two skulls stored at the American Museum of Natural History.

Based on ancient DNA extracted from the museum specimens, researchers have posited that the horned crocodile was closely related to modern-day ‘true’ crocodiles which live throughout the tropics, but it sits on an adjacent branch of the crocodile family tree that split some 25 million years ago.

This rejigs scientific thinking about the horned crocodile’s evolutionary relationships, which most recently had them pegged as relatives of dwarf crocodiles.

The study also suggests that the ancestor of modern crocodiles likely originated in Africa, and goes some way towards settling the long-standing controversy that has swirled about the horned crocodile’s evolutionary history.

Heavy-built horned crocodiles, named for unusual bony protrusions atop their heads and known today as Voay robustus, roamed Madagascar alongside another, more slender crocodile, according to accounts from early explorers.

But while the Nile crocodile (Crocodylus niloticus) still inhabits the island to this day, and is the largest and most common crocodilian in all of Africa, horned crocodiles went extinct after humans arrived on Madagascar’s shores, as early as 9,000 years ago.

“They blinked out just before we had the modern genomic tools available to make sense of the relationships of living things,” said study author Evon Hekkala, a behavioral ecologist turned conservation geneticist at Fordham University in New York.

“And yet, they were the key to understanding the story of all the crocodiles alive today.”

Understandably, horned crocodiles have been the focus of some intense study and debate amongst paleontologists. But after 150 years of investigations, researchers haven’t been able to agree on where to place Madagascar’s horned crocodile on the tree of life.

At first, horned crocodiles were described as a new species of “true crocodile” alongside the Nile crocodile. But then scientists thought they had more in common with shorter, smaller dwarf crocodiles. 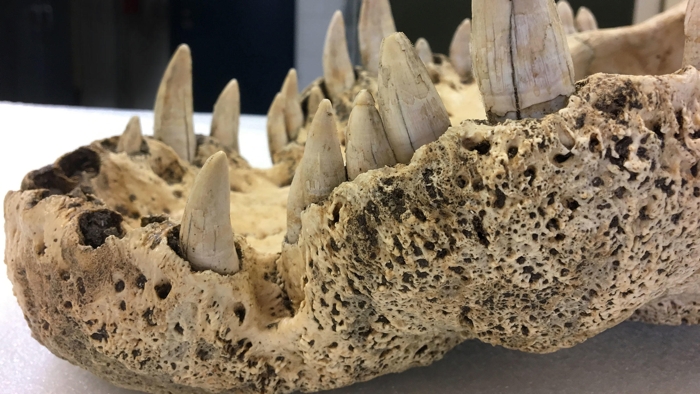 An extinct crocodile skull analyzed for its DNA in the study. (M. Ellison/©AMNH)

Part of the problem is crocodiles are unusual beasts that look remarkably similar to their fossilized ancestors who lived some 200 million years ago. These physical similarities make teasing out the relationships between modern crocodiles and their ancient ancestors difficult.

“We’ve been trying to get to the bottom of the great diversity that exists among them,” said Hekkala, who appears to have a knack for solving crocodilian mysteries using ancient DNA.

In 2011, as a graduate student, she discovered by genetic analysis that the Nile crocodile was actually two distinct species, not one – and the species differed by two whole chromosomes.

This time around, Hekkala and her colleagues mapped mitochondrial DNA extracted from the teeth of two V. robustus specimens and compared them against a few crocodilian reference genomes.

The horned crocodile skulls, which date back to around 1,300 to 1,400 years old, were collected on an expedition to southwest Madagascar between 1927 to 1930, and have been stored at the American Museum of Natural History ever since.

Mitochondrial DNA, which is passed from mother to offspring, tends to stay much the same over generations, making it a useful tool for tracing evolution through maternal ancestry. But as ancient DNA fragments with age, it always depends on how well the DNA of a particular specimen has been preserved.

The genetic comparisons here suggested that the horned crocodile represents a “sister lineage” to ‘true’ crocodiles, placing V. robustus right next to modern-day Crocodylus, such as Australia’s saltwater crocodile, on the evolutionary tree.

It was only with modern DNA techniques and the right computational setup that the research team could “actually fish out this DNA from the fossil and finally find a home for this species,” explained study author and geneticist George Amato from the American Museum of Natural History’s Institute for Comparative Genomics.

So, you could say this is a long-awaited homecoming for V. robustus.

“This finding was surprising and also very informative to how we think about the origin of the true crocodiles found around the tropics today,” Amato added.

“The placement of this individual suggests that true crocodiles originated in Africa, and from there, some went to Asia and some went to the Caribbean and the New World. We really needed the DNA to get the correct answer to this question.”

The research was published in Communications Biology.