Why did the sponge cross the seabed? It’s a legitimate question, especially since scientists have only just now discovered that these strange organisms may be significantly more sprightly than anybody ever realized.

In a new study, researchers surveyed the deep Arctic seabed with a remotely operated submersible, looking for signs of life in the bottom of the ocean at the top of the world.

Across the submerged seamount peaks of Langseth Ridge in the Arctic Ocean, they found something they never expected – sponge tracks, mysterious trails seemingly left behind by some nearby and otherwise very-stationary-looking sea sponges.

“This is the first time abundant sponge trails have been observed in situ and attributed to sponge mobility,” the team, led by marine biologist Teresa Morganti from the Max Planck Institute of Marine Microbiology in Germany, explains in a new paper. Biologists have long regarded sponges as largely sessile life-forms that rarely ever move, except in their larval stage. While mature sponges can and do slowly reposition themselves in response to various external stimuli, they’re not exactly famous for their speed or dexterity.

They are, after all, merely sponges – amazing and unusual creatures, to be sure, but not animals with any muscles or specialized organs adapted for locomotion.

Nonetheless, previous research into sponge mobility has suggested their limited degree of movement – enabled by contracting and expanding their bodies – allows them to reposition themselves to acquire food, avoid adverse environmental conditions, and to disperse after reproduction.

But these maneuvers don’t come without a cost, it seems.

In the new observations along the Arctic seabed ridges, the researchers noted that sponge tracks were marked by a trail of spicules – small skeletal-like formations that serve as structural elements to support sponge bodies, but which appear to also fragment off them during sponge movement.

“Trails of densely interwoven spicules connected directly to the underside or lower flanks of sponge individuals, suggesting these trails are traces of motility of the sponges,” the researchers write.

“These [trails of spicules] were observed to be several centimeters in height and occasionally many meters in length, often connected directly to living sponges.”

While the biological significance of the spicule debris in the trails remains unclear, the team says it’s possible the spine-like fragments might serve as a food source for other sponges, including juveniles. Effectively, a trail of breadcrumbs that may help feed and disperse the young in the dark recesses of the deep ocean, which is largely devoid of nutrients.

“The extremely low primary productivity, sedimentation and particle advection rates of the Langseth Ridge region overall result in some of the lowest standing stocks of benthic life, so potentially this Arctic Geodia community relies on particulate and dissolved fractions from the degradation of old organic debris trapped within the spicule mat as additional food sources,” the researchers explain. 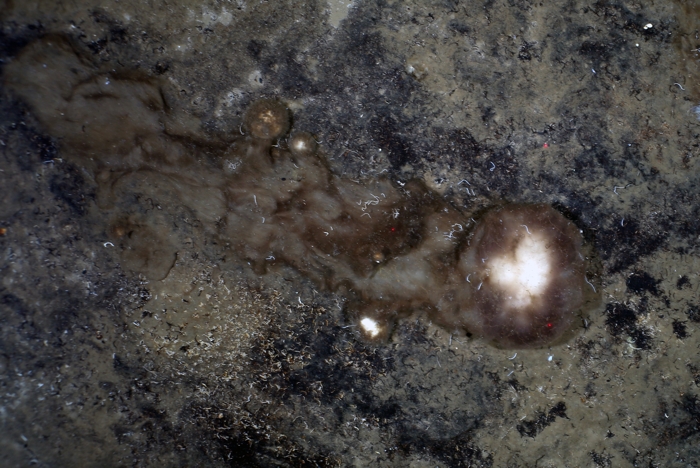 While it’s possible the sponge movement might be due to unseen, external factors, the researchers say there is no evidence of fast-moving water currents at these low depths, and observations of sponge trails heading up slopes suggests the mobility isn’t just an effect of gravity, either.

Despite such alternative explanations being ruled out, the researchers acknowledge they still don’t entirely understand this “unexpected phenomenon”, and say further observations and study will be needed to elucidate the true significance of sponge mobility.

One thing is for certain, though. Sponges, when they do decide to move, do not move much. All told, sponges seem content traveling just a few centimeters a year.

Are Your Cats Playing or Fighting? Researchers Think They Can Tell The Difference
Incredible ‘Fairy’ Robot Sails on The Breeze Like a Floating Dandelion
Incredible Footage Shows Planets Circling a Star Light-Years Away
JWST Has Found Life’s Elemental Building Blocks in The Depths of Darkest Space
Wildfire Destruction in The Western US Has Doubled in Just 10 Years