A skull long suspected of belonging to a rare Arctic hybrid has now had its unusual biology confirmed via DNA analysis.

According to the results, this strange beast had a beluga whale for a dad and a narwhal for a mum, and would have forged its own path, distinct from the lifestyles of both parents.

The skull was collected in 1990 by a hunter who found three of the unusual animals swimming in the waters off the coast of West Greenland. The animals described by the hunter were like no cetacean ever before seen, so the single skull he preserved from the hunt was taken to the Natural History Museum of Denmark, where it’s been ever since.

In 1993, a paper concluded that, based on its physical characteristics, the specimen was the hybrid of a narwhal (Monodon monoceros) and a beluga whale (Delphinapterus leucas) – the only two species in the Monodontidae family.

The skull didn’t exhibit the narwhal’s characteristic horn; in fact, it was pretty different from both species.

“The anomalous whale’s skull is much larger than those of normal narwhals and belugas. In particular, the rostrum and mandibles are relatively long and massive,” the researchers wrote in that 1993 paper.

“The dentition is unlike that of any known cetacean, but some features of the teeth are considered analogous to those of both narwhals and belugas.”

In the image below, you can see skulls of a beluga whale (top), the anomalous hybrid (middle), and a narwhal (bottom). 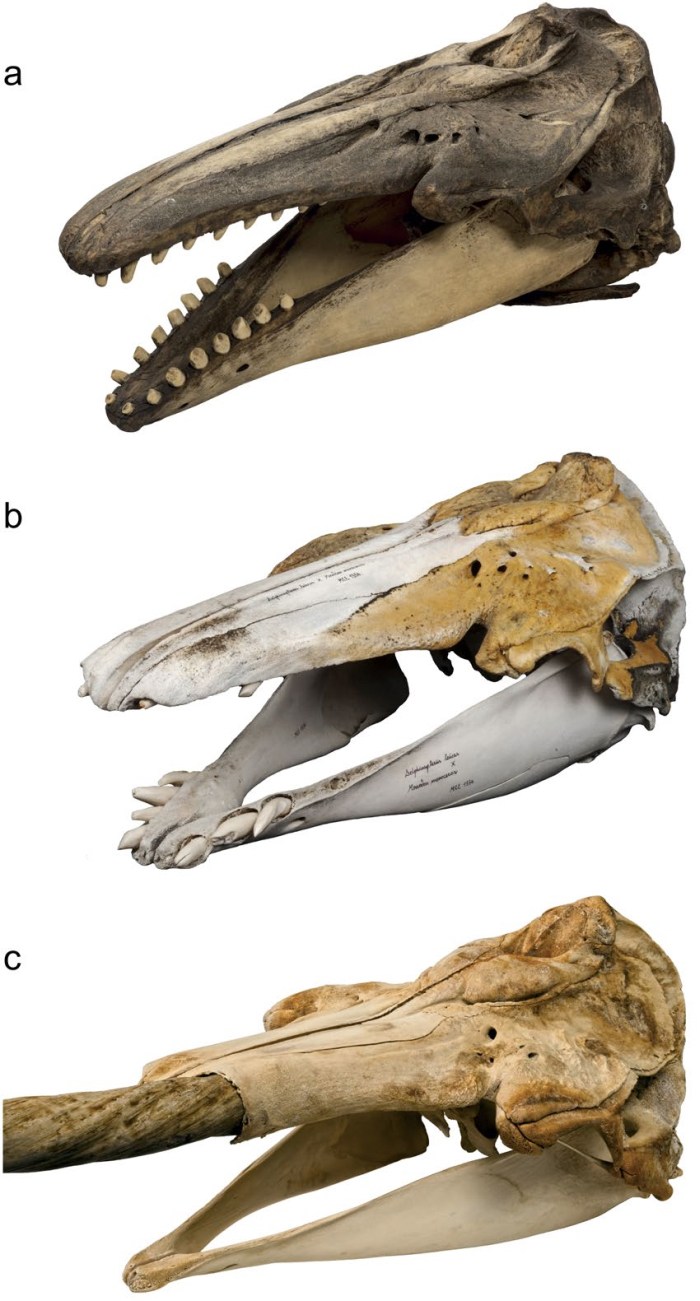 But before now, it was also still possible that the skull could have belonged to an anomalous beluga, researchers thought. Now, 26 years later, genetic analysis has clinched it.

Using genetic material extracted from the skull’s teeth, scientists from the University of Copenhagen conducted a genome-wide DNA sequencing and mitochondrial DNA analysis of the specimen.

They then compared the results of these to the genomes of eight living beluga whales and eight living narwhals, all from around the region where the skull was found.

The genome confirmed it. The skull belonged to a ‘narluga’ that the researchers determined to be male – half narwal, half beluga, with narwhal DNA that can only come from the female germline – in other words, mum.

But the skull had more secrets to reveal. By analysing isotopes of carbon and nitrogen in the bone collagen, the scientists were able to reconstruct the animal’s diet. This was compared to the isotopes of 18 beluga whale skulls and 18 narwhal skulls.

The narluga skull had a higher concentration of carbon isotopes than both of its parent species – indicating that its source of food was different. High carbon isotope concentrations generally indicate benthic prey, suggesting that the narwhal foraged deeper for food than either of his parents.

Although the hunter who discovered the skull reported seeing three narlugas in the wild – all uniformly dark grey, with flippers like a beluga and tails like a narwhal – the skull is the only known evidence we have of this interspecies breeding.

But interbreeding between other cetacean species isn’t all that uncommon, such as a dolphin-whale hybrid seen swimming off the coast of Hawaii last year. And at least 16 other similar cases of cetacean hybridisation have been described in scientific literature – so you can bet your blowhole there are probably many others that scientists haven’t spotted.

Some of them may even be hiding in museum collections like this one was, just waiting for someone to come along and sequence their DNA.

Hidden Chapel of Disemboweled Saint Found in The Old Lore of Westminster Abbey
Psychologists Found a Weird Trick That Changes How Food Tastes
Bats Growl at Each Other Like Death Metal Singers And It’s Probably Not Out of Love
Small Lakes Keep Growing Across The Planet, And It’s a Serious Problem
Forests at Risk of Burning an Extra 30 Days a Year Without Climate Action