A Maine lobsterman recently made a 1-in-a-100-million catch when he pulled up a rare lobster with a bright blue, speckled shell, the color of fairground cotton candy.

The lobsterman, Bill Coppersmith, caught the so-called cotton candy lobster on Nov. 5 in Casco Bay, an inlet of the Gulf of Maine. “Bill and his crew were extremely excited,” said Katie Oross, a spokesperson for the seafood company Get Maine Lobster, for which Coopersmith is a contract fisherman.

Coppersmith named the baby-blue crustacean Haddie, after his granddaughter, and he quickly alerted Get Maine Lobster of the catch, Oross told Live Science in an email.

Cotton candy lobsters are certainly a rarity, although it’s unclear exactly how many exist in the wild, according to National Geographic. That said, the whimsically colored crustaceans turn up about once every four to five years, Michael Tlusty, associate professor of sustainability and food solutions at the University of Massachusetts Boston, told National Geographic.

“It is so rare, there’s only 1 in 100 million caught,” Mark Murrell, CEO of Get Maine Lobster, said in a recent video about Haddie. Coopersmith, who has been a lobsterman for 40 years, has caught two other rare lobsters in the past, one white and one orange, Oross said.

He named those colorful crustaceans after his grandchildren as well.

Lobsters get their color from a pigment and antioxidant called astaxanthin, and the shape of this compound changes when other proteins bind to it, according to National Geographic.

When you cook lobster, the chemical bonds holding proteins to the pigment break, freeing astaxanthin throughout the lobster’s shell and skin, and making the animal appear bright red, Nature reported.

But in live lobsters, some proteins grab hold of astaxanthin and contort the molecule so much that the twisted version absorbs and reflects different wavelengths of light; the reflected wavelengths give the pigment its color. 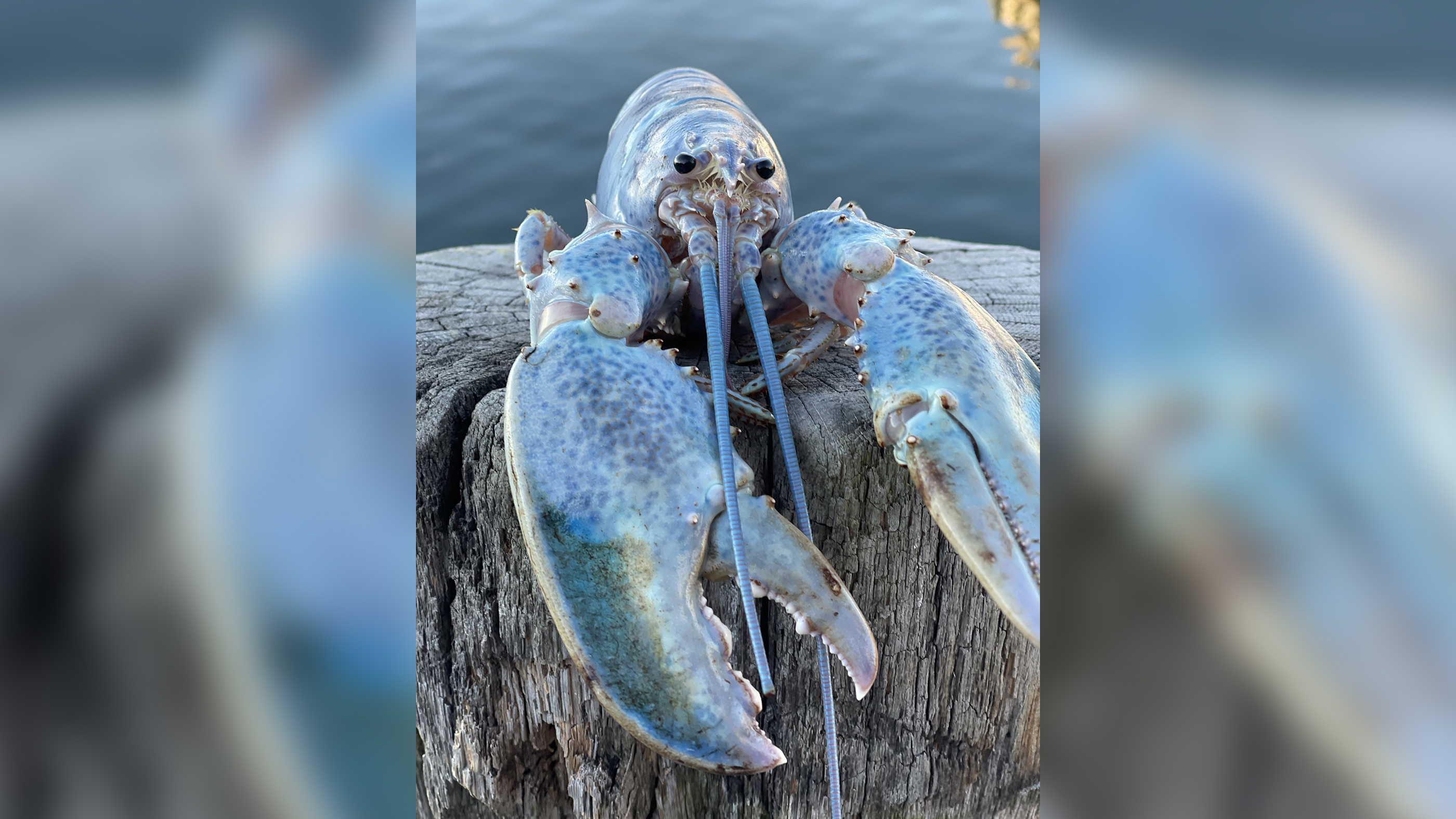 The rare lobster after it was just caught in Maine. (Get Maine Lobster)

The mix of these many colors usually gives lobsters their mottled, burnt orange, and brown appearance, but every once in a while, a cerulean lobster-like Haddie crops up.

This drastic shift in coloration may stem from the lobster having unusually low astaxanthin levels, due to a diet that’s low in the compound; this could happen if the lobster mostly fed on bait fish, rather than the typical lobster diet of astaxanthin-rich crab and shrimp.

If that’s the case, what little astaxanthin the lobster consumed would have to primarily bind with proteins that cause the pigment to look blue, to give the animal that cotton candy color.

Or alternatively, the lobster’s color could be the result of a genetic quirk that alters the proteins that bind to the pigment, thus changing its apparent color, according to National Geographic.

Whatever the cause of her opal-like coloration, Haddie the lobster has found a new home at the Seacoast Science Center in Rye, New Hampshire. “This is a beautiful lobster, and we want to preserve it,” Murrell said in the company’s recent video.

Why not release Haddie back into the Gulf of Maine? “According to the Maine Lobstermen’s Community Alliance, lobsters with rare coloring may be at a disadvantage and more visible to predators, since their normal coloring helps them blend in with the environment,” Oross told Live Science.

“Therefore, Get Maine Lobster donated her to the Seacoast Science Center, where she can hang out with other lobsters and be as safe as can be.”

Animal camo: Can you find the animals hiding out in these images?

Scientists Don’t Know What to Do With This Weird ‘Blue Goo’ Ocean Organism
The Remains of This Recently Found Ancient Structure Are Even Older Than The Pyramids
A History of Tiny Asteroid Impacts Forced Our Moon to ‘Wander’ on Its Axis
An Anatomical Quirk Could Explain Why Whale Brains Aren’t Pulverized When They Dive
A New FRB Signal Has Buzzed Nearly 2,000 Times in Just Two Months, Raising a Mystery