With an underwater jet pack, a black wet suit and a tiny briefcase laden with wires, Rui Matsumoto looked like a spy on a sabotage mission. In truth, the scientist was on a different sort of assignment in the Galápagos Islands, though the stakes were equally high.

Matsumoto had come to perform sonograms on the world’s biggest sharks.

Whale sharks can be longer than a bus and weigh twice as much as a Tyrannosaurus rex, and they are surprisingly difficult to study. That’s not just because they’re a tad intimidating.

It’s also because they’re hard to pin down, are regularly diving nearly 6,000 feet (1,828 metres) below the waves and crossing vast, global distances in their search for plankton.

So although scientists have learned recently that young whale sharks tend to hang out in just a handful of hot spots scattered across the world’s temperate zones, we know almost nothing about how whale sharks make baby whale sharks.

“These sharks are still one of the most enigmatic creatures on the planet,” said Simon Pierce, a marine biologist with the California-based Marine Megafauna Foundation.

That’s a problem, because global whale shark populations have dropped by half since the 1980s because of targeted fishing, boat strikes and collateral damage that stems from the fishing, oil and gas, and shipping industries.

The International Union for Conservation of Nature classifies the animals as endangered. But knowing how, where and when whale sharks breed could help protect the animals at a crucial point in their life cycle. And that’s why Matsumoto recently found himself armed with an ultrasound wand as he chased down one of these gentle giants.

As a marine biologist at the Okinawa Churashima Foundation in Japan, Matsumoto has had success using ultrasonography to find pregnancies in manta rays, zebra sharks, tawny nurse sharks and a host of other marine creatures.

He has also used it to perform health checkups on the Okinawa Churashima Aquarium’s captive whale sharks.

But no one had ever used this technology on wild whale sharks before he, Pierce and a team of collaborators tested it out on 21 of the fish – very large adult females – during a two-week expedition off Darwin Island in the Galápagos. 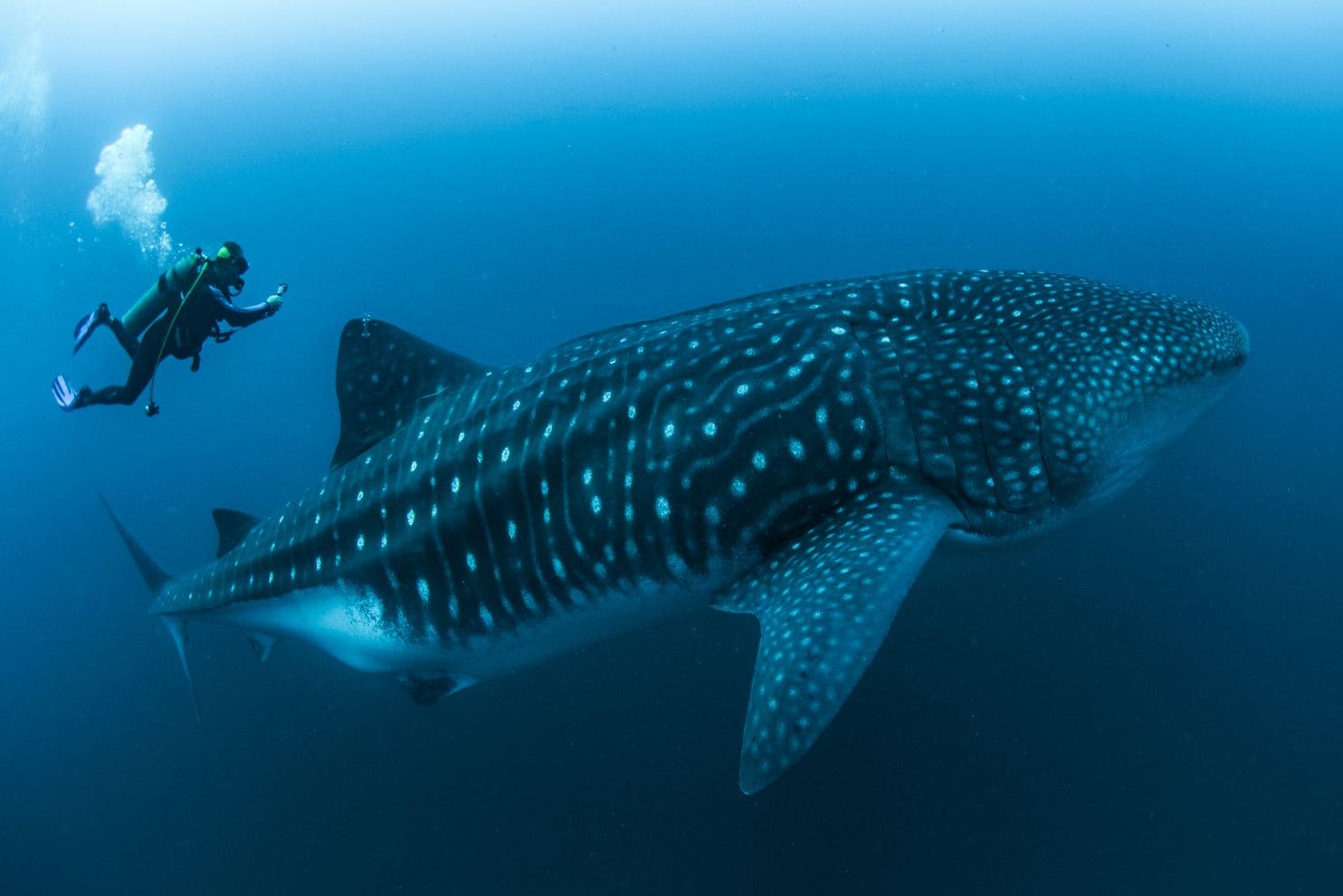 As anyone who’s ever had a baby knows, ultrasound machines create images of our insides by emitting harmless sound waves and recording what bounces back. The technology works the same way in whale sharks, but there are some key differences.

For starters, there’s no easy way to haul a whale shark out of the ocean for examination, and even if there were, it would likely cause undue stress to the animal.

That means all of Matsumoto’s imaging equipment first had to be waterproofed. Likewise, swimming sharks do not sit still, so the team outfitted his dive tank with an underwater propulsion system that allowed him to keep up with the behemoths.

But the biggest difference between performing an ultrasound on a whale shark and a human is the skin. Skin and cartilage hamper the way ultrasound penetrates the body, Matsumoto said.

And whale sharks may be the most thick-skinned critters on the planet, with hides nearly 10 inches (25 centimetres) thick in places.

Because of this, the scientists weren’t able to image everything they wanted to, but they did get a pretty good look at the whale sharks’ uteri, at least enough to confirm none was pregnant.

One mature female was found to have follicles in her ovaries, however – the first time scientists have ever seen them (some were as wide as three inches [7.6 cm]).

This could mean that she and her fellow females were at the beginning of their reproductive cycles and about to go mate offshore. Likewise, it could mean that they were at the end of the cycle, in which case mating would have already occurred, perhaps in the deep.

The team was also able to draw blood from the sharks’ pelvic fins, allowing them to measure sex steroid hormone levels that might reveal more about the animals’ reproductive conditions.

But because these are some of the first samples of their kind, there isn’t much to compare them with, the researchers said.

“While this year didn’t provide the definitive answers on their reproduction we’d like, it was a massive step forward,” Pierce said in an interview from Madagascar, where he is investigating a newly discovered whale shark hot spot.

“We know now that these techniques work and that they can be applied in the field. They’re the best tools we’ve got to solve this mystery.”

The expedition has spawned new mysteries, too. According to Pierce, the whale sharks seemed to speed up their swimming when Matsumoto began scanning.

This is weird, because the same animals didn’t even flinch when the team outfitted them with tags. He said this led him to surmise that whale sharks might be able to hear ultrasound, which is completely imperceptible to humans.

At this point, with so much left to learn about the species, nothing would be surprising.

The findings, Matsumoto said, “will be the first step to unveil their mysterious reproductive biology for future studies.”