What do you think spiders eat? Insects? Yeah, that’s true. But their diets can actually be a lot more varied than that – and biologists have observed a spider smorgasbord that will blow your mind.

In the Amazon rainforest, a team of researchers recorded spiders and other arthropods such as centipedes feasting on tadpoles, lizards, frogs, and, on one very memorable occasion, a tarantula the size of a dinner plate killing a young opossum and dragging it off to devour at leisure.

It’s not surprising that spiders have varied diets. We’ve seen spiders in South America and Australia chowing down on snakes, mice, and birds, and spiders that eat fish can be found round the globe.

It’s thought that these larger feasts are few and far between, supplementing a diet mostly of smaller, easier to catch insects. But it looks like the extent that spiders take down larger prey may have been underestimated, even though the majority of their diet does consist of bugs. “This is an underappreciated source of mortality among vertebrates,” said evolutionary biologist Daniel Rabosky of the University of Michigan (U-M).

“A surprising amount of death of small vertebrates in the Amazon is likely due to arthropods such as big spiders and centipedes.”

For several years, the team has studied reptiles and amphibians in the Amazon rainforest at the foot of the Andes. In that region, there are around 85 amphibian species and 90 reptiles.

Their discovery of arthropod predation was incidental; the researchers recorded several events because they involved frogs and lizards, eventually realising they had enough such encounters to compile a paper in its own right.

“Considering that there are hundreds of invertebrates that potentially prey upon vertebrates, the number of possible interactions between species is huge, and we are highlighting that fact in this paper,” said U-M biologist Rudolf von May.

The resulting paper includes encounters from 2008, 2012, 2016 and 2017. Most of them were recorded at night; most of the predators recorded were spiders; and most of the prey were amphibians.

But one occasion really stands out. The team heard some sounds in the leaf litter and went to check it out.

“We looked over and we saw a large tarantula on top of an opossum,” said U-M biologist Michael Grundler. “The opossum had already been grasped by the tarantula and was still struggling weakly at that point, but after about 30 seconds it stopped kicking.”

When the mammal stopped struggling, the tarantula dragged it away out of sight (you can see the encounter at 0:11 in the video below).

The encounter is likely the first documentation of a large Mygalomorph spider preying on an opossum.

“We were pretty ecstatic and shocked, and we couldn’t really believe what we were seeing,” Grundler said. “We knew we were witnessing something pretty special, but we weren’t aware that it was the first observation until after the fact.”

But it’s not all blood and guts. The team observed the surprisingly friendly relationship one species of Pamphobeteus tarantula has with one – and just one – genus of frog, a relative of the dotted humming frog. The tarantula preys on every other frog, but leaves this little guy alone.

The relationship between several species of tarantula and the dotted humming frog has been well documented, and it’s possible that it’s of mutual benefit – the frog gets leftovers and protection from the spider, and in return eats the ants that prey on the spider’s eggs. 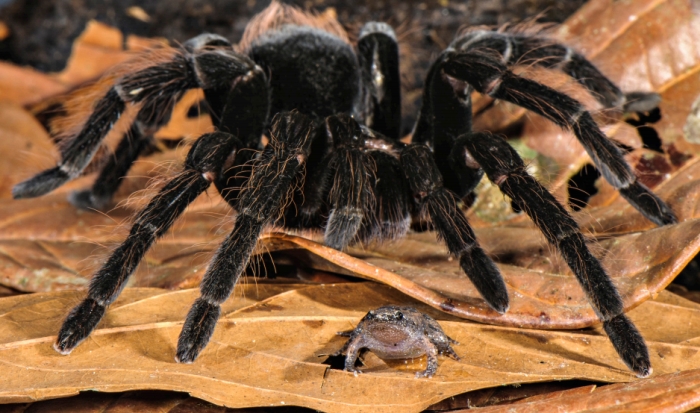 The team observed both dotted humming frogs and juvenile tarantulas leaving the same burrow for a night of foraging. Some of the tarantulas had fly larvae crawling on their bodies, which the team suggests might mean the frogs also help control parasites in the shared burrows.

Isn’t the idea of frogs and tarantulas being BFFs just the most adorable thing?

The research has been published in Amphibian and Reptile Conservation.

Bigfoot Has a Very Simple Explanation, Scientist Says
A Mysterious Whirlpool Appeared Over Hawaii, And It Could Be Because of SpaceX
Physicists Used Sound Waves to Give a Tiny Sun Its Own Kind of Gravity
Mysterious Medieval City in Africa Had a Genius System to Survive Drought
Intriguing Meteorite From Mars Reveals ‘Huge Organic Diversity’, Scientists Say