Maggots repulse us. Despite being the innocent babes of the insect world, there’s something about these larval critters that just gets under our skin. Yes, literally too. And dangerously.

But there are good reasons we should overcome our aversion. It’s becoming increasingly clear how incorporating insects into our diets stands to benefit the environment – and even the maligned maggot could have an important role to play in a sustainable food supply.

Scientists and startups alike are looking into how to turn nutrient-rich maggots into a viable food source for domestic animals and livestock, while simultaneously making the most of our monumental food waste problem. 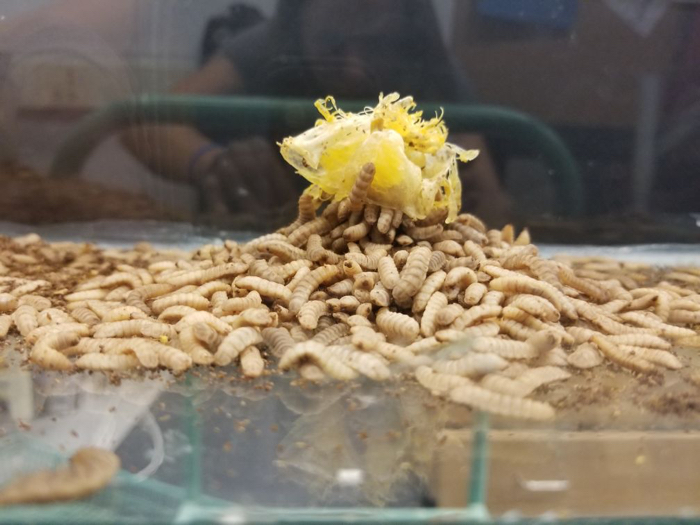 But to turn maggots into food, first they need to be efficiently well fed themselves. Figuring out the best way to do that is a challenge, since we don’t actually know an awful lot about how these swarms eat.

To fix that, scientists at Georgia Tech have been laying out the chow for black soldier fly larvae (Hermetia illucens) and filming what happens with the wonders of time-lapse video.

As the researchers put it, these juvenile flies form a “fountain of larvae” – almost exactly like a beautiful spout of pristine, cleansing, flowing water… except made with a mountain of munching maggots.

“Larvae push each other away from the food source, resulting in the formation of a fountain of larvae,” the team explains in their paper.

“Larvae crawl towards the food from below, feed, and then are expelled on the top layer. This self-propagating flow pushes away potential roadblocks, thereby increasing eating rate.”

You can check out that self-propagating flow in the video below:

This disgusting fountain solves what’s known as the ‘dog bowl problem’ (which limits the number of feeders who can access a common meal), and was observed in a number of varied feeding experiments.

These included small get-togethers taking on slices of orange, and a remarkable binge session in which a giant swarm devoured an entire pizza over the space of 2 hours, ceaselessly elbowing each other out of the way with such consummate greed they basically resembled a liquid.

As far as we know, this bizarre fluid feeding arrangement could be a one-off in the animal kingdom, hypothetically making fly larvae “unique among scavengers”, as the researchers put it.

“The ‘fountain of larvae’ may not be possible for other animal species,” the team explains.

“Larvae crawl on top of one another to access food, while cattle and other land animals do not. Fish in schools avoid touching each other, while larvae touch one another constantly, and in fact do not like to be isolated.”

And there are other strange similarities at work here. Like in the pizza feast, where the discerning habits of maggots almost seem to take after carb-conscious human pizza-lovers.

“Once larvae break through the crust, they consume the softer cheese rather than eating the rest of the crust,” the researchers write.

“This indicates that the collective motion of larvae allows them to access food that is easier for them to chew.”

The findings are reported in Journal of the Royal Society Interface.

This Rembrandt Has Been Hiding a Surprising Secret For Centuries
An Expert Explains Why The Radioactive Water Stored at Fukushima Should Be Released
Earth’s Inner Core May Right Now Be in The Process of Changing Direction
Mysterious White Clouds Keep Popping Up Near The Bahamas, And No One Knows Why
People Who Don’t Exist Look More Real Than Actual People, Study Finds