Some of the deepest parts of the Black Sea are still responding to climate changes prompted by the last ice age, scientists have discovered – a period which officially ended almost 12,000 years ago.

An analysis of gas hydrate deposits – in this case methane trapped by water molecules, in a solid substance that looks like ice – has revealed the lagging response in a northwestern area of the Black Sea known as the Danube fan.

Together with temperature measurements and other data, the drill cores of the gas hydrate deposits reveal something rather surprising: Levels of free methane gas under the seafloor have not yet adapted to the warmer conditions that have already prevailed on the surface for thousands of years.

“This shows that the gas hydrate system in the Danube deep sea fan is still responding to climate changes initiated at the end of the last glacial maximum,” write the researchers in their paper. 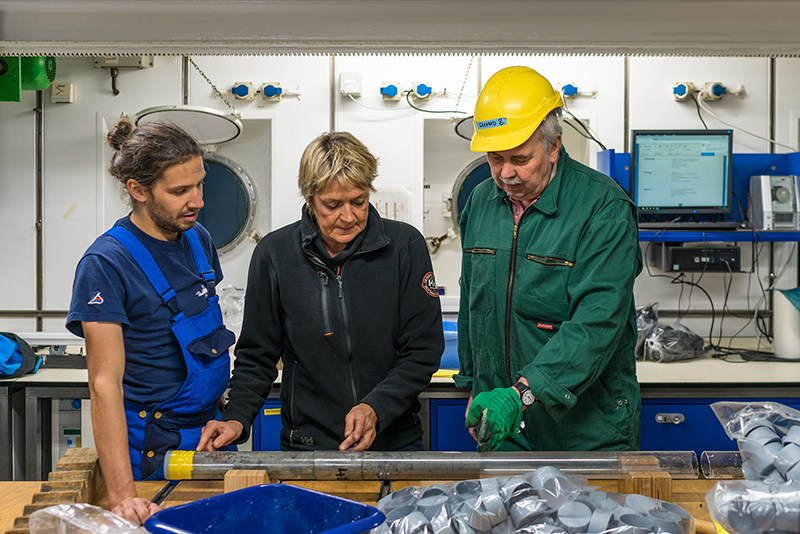 Central to the findings are scientists’ attempts to determine the base of the gas hydrate stability zone (GHSZ) – the lowest point at which gas hydrates naturally form due to temperature, pressure, and a few other factors. Above and below that zone, you’ll get ‘free’ methane gas not trapped in hydrates.

To find the base of this zone, researchers typically turn to a seismic reflection measure of the sediment known as the bottom-simulating reflector, or BSR for short. However, earlier work has found that in this part of the Black Sea, there’s a curious depth discrepancy between the BSR and the base of the gas hydrate stability zone.

By drilling down to the seafloor and taking temperature measurements, researchers have now concluded that the gas hydrate stability zone has adapted to the warmer conditions over the past millennia – as indicated by a rise to a higher level – but the free methane gas and the associated BSR are still playing catch up.

“From our point of view, the gas-hydrate stability boundary has already approached the warmer conditions in the subsurface, but the free methane gas, which is always found at this lower edge, has not yet managed to rise with it,”  says geophysicist Michael Riedel, from the GEOMAR Helmholtz-Center for Ocean Research in Germany.

That lagging response could be why the BSR isn’t where it should be. Sediment permeability could also play a role, the team thinks, and their measurements show that methane has managed to rise in certain areas but not others.

“In summary, we have found a very dynamic situation in this region, which also appears to be related with the development of the Black Sea since the last ice age,” says Riedel.

Around 20,000 years ago, the water level was around 100 meters (328 feet) lower in the Black Sea, meaning less pressure on the sea bed. The water was significantly cooler too. As far as the free methane gas is concerned, those conditions haven’t yet changed.

As with any study of the effects of climate change, this research is going to help in future climate modeling. There’s currently a huge volume of gas hydrate deposits underneath the Arctic, for instance, and it’s important to know how they might react to increases in temperature in the years ahead.

The scientists emphasize that their findings should be interpreted cautiously, with many different factors in play and plenty more scope for study – but they also stress the importance of in-situ measurements and quality data for an analysis such as this.

“For our investigations we used our drilling device MARUM-MeBo200 and broke all previous depth records with a maximum depth reached of almost 145 meters [476 feet],” says geologist Gerhard Bohrmann, from the University of Bremen in Germany.

The research has been published in Earth and Planetary Science Letters.