The hot, dry hillsides of Southern California are normally covered in drab desert scrub. But some of them harbour a colourful secret: millions of flowers that wait for the perfect conditions to bloom.

Over the past month, the just-right combination of ample rain from December and stable cooler temperatures arrived in Walker Canyon, which is about 50 miles (80 kilometres) southeast of Los Angeles.

This triggered a “super bloom” of dazzling orange poppy flowers that the area typically sees only once every 10 years.

Hordes of tourists have since descended upon the nearby city of Lake Elsinore, filling the roads with traffic and stuffing the hillsides with people who are trying to get a perfect Instagram selfie with the flowers.

Meanwhile in space, the bursts of orange colour – and miles’ worth of cars – are so dense that the WorldView-2 satellite owned by DigitalGlobe easily spotted the scene from about 480 miles (770 km) above the planet.

“DigitalGlobe collected a new set of images yesterday (March 19) of the ‘Superbloom’ near Lake Elsinore, California,” a company representative told Business Insider in an email.

“The colourful satellite imagery shows the hillsides along Walker Canyon filled with blooming poppies as well as hundreds of cars parked nearby and people hiking along trails in the area.”

What California’s orange super bloom looks like from space This photo taken by WorldView-2, which launched in October 2009, shows an overview of Walker Canyon (top) and Lake Elsinore (bottom).

In the image below, the Walker Canyon hiking trailhead begins at left just north of Interstate 15.

Near the on-ramps to the location, scores of vehicles can be seen parked along the roadside. Zooming into the trailhead (center left), people can be seen as small dots walking up the hills and toward patches of flowers. 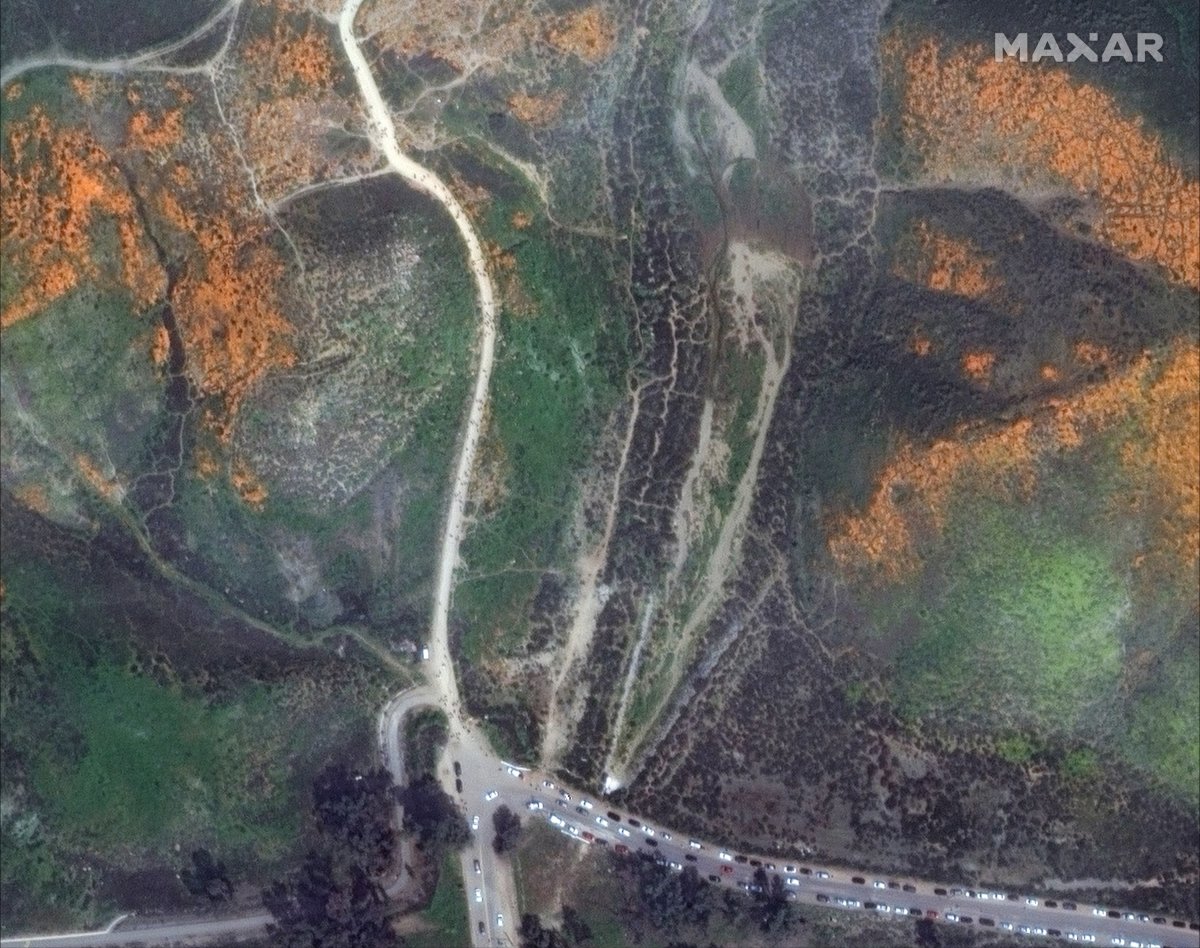 Northwest of the trail, and a couple of miles west of the city of Perris, California, the orange-poppy super bloom appears especially lush with flowers. The bloom – and the surge of interest and visitors it has inspired – is expected to last about one more week, according to Conde Nast Traveller.

Scientists Create Shapeshifting Humanoid Robot That Can Liquefy And Reform
Mysterious ‘Zone of Uncertainty’ Inside The Brain Reveals a Surprise
Sword Mistaken For Replica Is Actually An Ancient 3,000-Year-Old Weapon
A Rare Green Comet Can Be Seen in The Sky, And It May Be Our Last Chance
Physicists Break Record Firing a Laser Down Their University Corridor