Quantum physics promises huge advances not just in quantum computing but also in a quantum internet – a next-generation framework for transferring data from one place to another. Scientists have now invented technology suitable for a quantum modem that could act as a network gateway.

What makes a quantum internet superior to the regular, existing internet that you’re reading this through is security: interfering with the data being transmitted with quantum techniques would essentially break the connection. It’s as close to unhackable as you can possibly get.

As with trying to produce practical, commercial quantum computers though, turning the quantum internet from potential to reality is taking time – not surprising, considering the incredibly complex physics involved. A quantum modem could be a very important step forward for the technology.

“In the future, a quantum internet could be used to connect quantum computers located in different places, which would considerably increase their computing power!” says physicist Andreas Reiserer, from the Max Planck Institute in Germany.

Quantum computing is built around the idea of qubits, which unlike classical computer bits can store several states simultaneously. The new research focuses on connecting stationary qubits in a quantum computer with moving qubits travelling between these machines.

That’s a tough challenge when you’re dealing with information that’s stored as delicately as it is with quantum physics. In this setup, light photons are used to store quantum data in transit, photons that are precisely tuned to the infrared wavelength of laser light used in today’s communication systems.

That gives the new system a key advantage in that it’ll work with existing fibre optic networks, which would make a quantum upgrade much more straightforward when the technology is ready to roll out.

In figuring out how to get stored qubits at rest reacting just right with moving infrared photons, the researchers determined that the element erbium and its electrons were best suited for the job – but erbium atoms aren’t naturally inclined to make the necessary quantum leap between two states. To make that possible, the static erbium atoms and the moving infrared photons are essentially locked up together until they get along.

Working out how to do this required a careful calculation of the space and conditions needed. Inside their modem, the researchers installed a miniature mirrored cabinet around a crystal made of a yttrium silicate compound. This set up was then was cooled to minus 271 degrees Celsius (minus 455.8 degrees Fahrenheit). 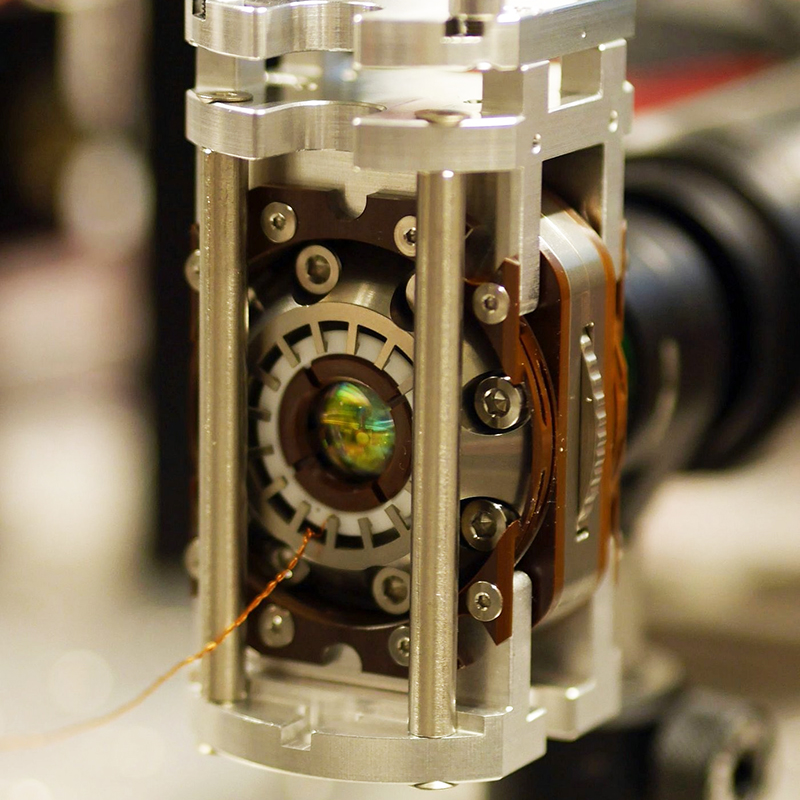 The cooled crystal kept the erbium atoms stable enough to force an interaction, while the mirrors bounced the infrared photons around tens of thousands of times – essentially creating tens of thousands of chances for the necessary quantum leap to happen. The mirrors make the system 60 times faster and much more efficient than it would be otherwise, the researchers say.

Once that jump between the two states has been made, the information can be passed somewhere else. That data transfer raises a whole new set of problems to be overcome, but scientists are busy working on solutions.

As with many advances in quantum technology, it’s going to take a while to get this from the lab into actual real-world systems, but it’s another significant step forward – and the same study could also help in quantum processors and quantum repeaters that pass data over longer distances.

“Our system thus enables efficient interactions between light and solid-state qubits while preserving the fragile quantum properties of the latter to an unprecedented degree,” write the researchers in their published paper.

The research has been published in Physical Review X.