In nature, diamonds form deep in the Earth over billions of years. This process requires environments with exceptionally high pressure and temperatures exceeding 1,000℃.

Our international team has created two different types of diamond at room temperature — and in a matter of minutes. It’s the first time diamonds have successfully been produced in a lab without added heat.

Our findings are published in the journal Small.

There’s more than one form of diamond

Carbon atoms can bond together in a number of ways to form different materials including soft black graphite and hard transparent diamond.

There are many well-known forms of carbon with graphite-like bonding, including graphene, the thinnest material ever measured. But did you know there’s also more than one type of carbon-based material with diamond-like bonding?

In a normal diamond, atoms are arranged in a cubic crystalline structure. However, it’s also possible to arrange these carbon atoms so they have a hexagonal crystal structure.

This different form of diamond is called Lonsdaleite, named after Irish crystallographer and Fellow of the Royal Society Kathleen Lonsdale, who studied the structure of carbon using X-rays. 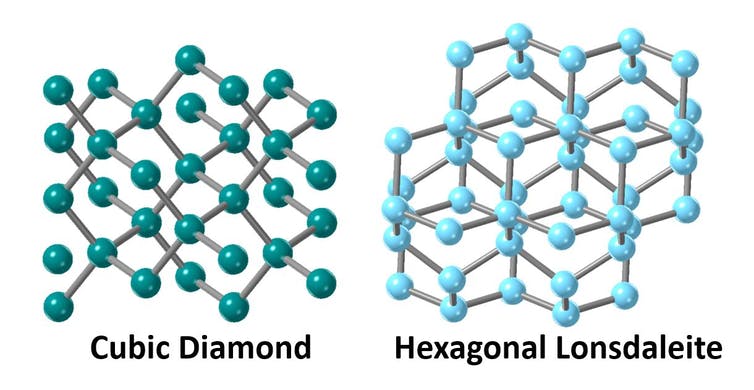 There is much interest in Lonsdaleite, since it’s predicted to be 58 percent harder than regular diamond — which is already considered the hardest naturally-occurring material on Earth.

It was first discovered in nature, at the site of the Canyon Diablo meteorite crater in Arizona. Tiny amounts of the substance have since been synthesised in labs by heating and compressing graphite, using either a high-pressure press or explosives.

Our research shows both Lonsdaleite and regular diamond can be formed at room temperature in a lab setting, by just applying high pressures.

The many ways to make a diamond

Diamonds have been synthesised in laboratories since as far back as 1954. Then, Tracy Hall at General Electric created them using a process that mimicked the natural conditions within the Earth’s crust, adding metallic catalysts to speed up the growth process.

The result was high-pressure, high-temperature diamonds similar to those found in nature, but often smaller and less perfect. These are still manufactured today, mainly for industrial applications.

The other major method of diamond manufacture is via a chemical-gas process which uses a small diamond as a “seed” to grow larger diamonds. Temperatures of about 800℃ are required. While growth is quite slow, these diamonds can be grown large and relatively defect-free.

Nature has provided hints of other ways to form diamond, including during the violent impact of meteorites on Earth, as well as in processes such as high-speed asteroid collisions in our solar system – creating what we call “extraterrestrial diamonds“.

Scientists have been trying to understand exactly how impact or extraterrestrial diamonds form. There is some evidence that, in addition to high temperatures and pressures, sliding forces (also known as “shear” forces) could play an important role in triggering their formation.

An example would be pushing a deck of cards to the left at the top and to the right at the bottom. This would force the deck to slide and the cards to spread out. Hence, shear forces are also called “sliding” forces. 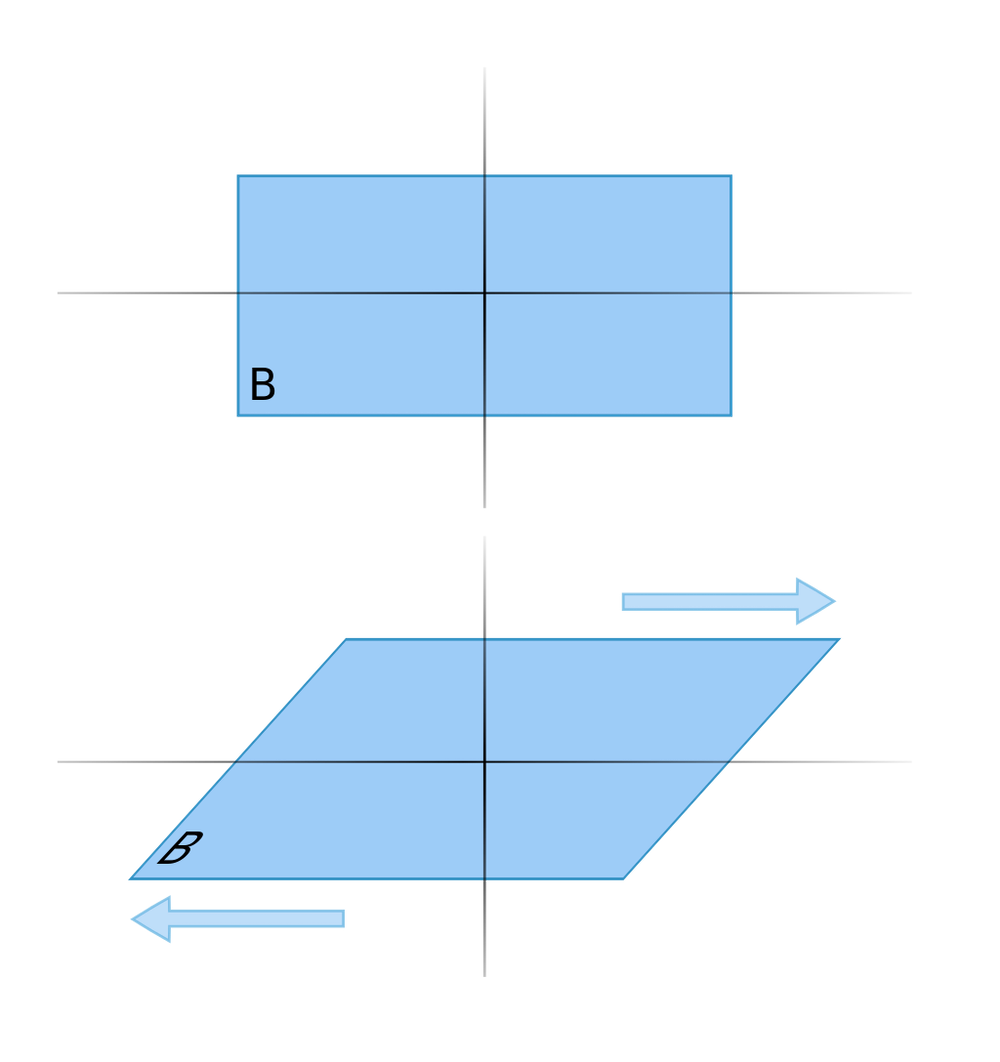 In ‘shear’ forces, the object is pushed in one direction at one end, and the opposite direction at the other. (Sharayanan/Wikimedia Commons)

For our work, we designed an experiment in which a small chip of graphite-like carbon was subjected to both extreme shear forces and high pressures, to encourage the formation of diamond.

Unlike most previous work on this front, no additional heating was applied to the carbon sample during compression. Using advanced electron microscopy — a technique used to capture very high-resolution images — the resulting sample was found to contain both regular diamond and Lonsdaleite.

In this never before seen arrangement, a thin “river” of diamond (about 200 times smaller than a human hair) was surrounded by a “sea” of Lonsdaleite. 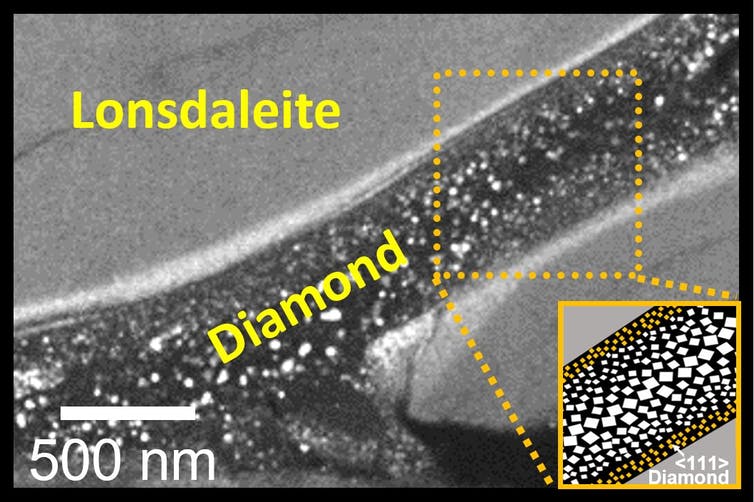 This electron microscope image shows a ‘river’ of diamond in a ‘sea’ of Lonsdaleite. (Supplied)

The structure’s arrangement is reminiscent of “shear banding” observed in other materials, wherein a narrow area experiences intense, localised strain. This suggest shear forces were key to the formation of these diamonds at room temperature.

The ability to make diamonds at room temperature, in a matter of minutes, opens up numerous manufacturing possibilities.

Specifically, making the “harder than diamond” Lonsdaleite this way is exciting news for industries where extremely hard materials are needed. For example, diamond is used to coat drill bits and blades to extend these tools’ service life.

The next challenge for us is to lower the pressure required to form the diamonds.

In our research, the lowest pressure at room temperature where diamonds were observed to have formed was 80 gigapascals. This is the equivalent of 640 African elephants on the tip of one ballet shoe!

If both diamond and Lonsdaleite could be made at lower pressures, we could make more of it, quicker and cheaper.