A new technique involving entangled photons has just led to a world first. Physicists have overcome a significant limitation of traditional holography by using quantum mechanics to successfully encode information within a hologram.

This could result in a significant upgrade to holography, from entertainment purposes to more serious applications such as medical imaging.

“Classical holography does very clever things with the direction, color and polarization of light, but it has limitations, such as interference from unwanted light sources and strong sensitivity to mechanical instabilities,” said physicist Hugo Defienne of the University of Glasgow in Scotland.

“The process we’ve developed frees us from those limitations of classical coherence and ushers holography into the quantum realm. Using entangled photons offers new ways to create sharper, more richly detailed holograms, which open up new possibilities for practical applications of the technique.”

Holograms are something many people see every day. In simple terms, they’re made by manipulating light to produce a two-dimensional representation of a three-dimensional image.

They’re used for security purposes on banknotes, bankcards and passports, but their applications range widely, from art and entertainment to navigation to medical imaging.

The potential uses are exciting, too. Data storage is one that is still being worked on.  When the kinks are ironed out, holographic memory could be the next big thing in high-capacity data storage.

To create a hologram in the traditional way, a beam of laser light is split in two. At the source, the two beams are coherent; that is, the frequency and phase are the same. One beam, called the object beam, is reflected off the object to be rendered. This reflected light is directed to a collection plate.

The other beam, called the reference beam, is just directed straight to the collection plate. At this point, the two beams mix and create an interference pattern. The difference in phase between the two beams is what allows a hologram to be created.

Defienne and his team use a similar setup, with a split beam of laser light. But instead of directing both beams to a single collection plate, they tried harnessing quantum entanglement. This is a phenomenon whereby pairs of particles – in this case photons (particles of light) – become linked in such a way that actions performed on one affect the other, even at a significant distance.

Entangled photons can be created by shining a higher-energy laser light through paired beta barium borate crystal plates. This splits the photon into two entangled photons, each with half the energy of the original. So this is what the team did, starting with a violet-blue laser.

This slight slowdown altered the phase of the photons, compared to the object beam. This meant that the two beams didn’t need to overlap – the hologram is created by measuring correlations between the entangled photon positions in the two cameras. Finally, four holograms are combined for a high-resolution phase image. 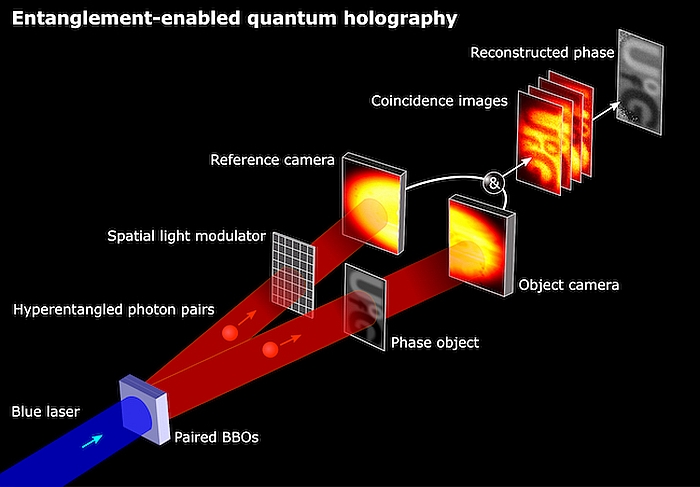 (The University of Glasgow)

“Many big discoveries in optical quantum physics in recent years have been made using simple, single-pixel sensors. They have the advantage of being small, quick and affordable, but their disadvantage is that they capture only very limited data about the state of the entangled photons involved in the process. It would take an extraordinary amount of time to capture the level of detail we can collect in a single image,” explained physicist Daniele Faccio of the University of Glasgow.

“The CCD sensors that we’re using give us an unprecedented amount of resolution to play with – up to 10,000 pixels per image of each entangled photon. That means we can measure the quality of their entanglement and the quantity of the photons in the beams with remarkable accuracy.”

The team used their new technique to generate holograms of the University of Glasgow logo, as well as real three-dimensional items, such as a strip of Scotch tape and part of a bird’s feather. Also, the smiley face you see in the cover image.

This demonstrates the technique’s potential use for measuring biological structures. It could even enable a new kind of microscopy with a large field-of-view, among other potential uses.

“One of those applications could be in medical imaging, where holography is already used in microscopy to scrutinise details of delicate samples which are often near-transparent,” Defienne said.

“Our process allows the creation of higher-resolution, lower-noise images, which could help reveal finer details of cells and help us learn more about how biology functions at the cellular level.”

The research has been published in Nature Physics.