Graphene continues to dazzle us with its strength and its versatility – exciting new applications are being discovered for it all the time, and now scientists have found a way of manipulating the wonder material so that it can better filter impurities out of water.

The two-dimensional material comprised of carbon atoms has been studied as a way of cleaning up water before, but the new method could offer the most promising approach yet. It’s all down to the exploitation of what are known as van der Waals gaps: the tiny spaces that appear between 2D nanomaterials when they’re layered on top of each other.

These nanochannels can be used in a variety of ways, which scientists are now exploring, but the thinness of graphene causes a problem for filtration: liquid has to spend much of its time travelling along the horizontal plane, rather than the vertical one, which would be much quicker.

To solve this problem, the team behind the new study used an elastic substrate to scrunch up the graphene layer into a microscopic series of peaks and valleys. That means liquid can scoot down the side of a peak vertically, rather than trekking across the open plains horizontally (all at the nanoscale, of course). 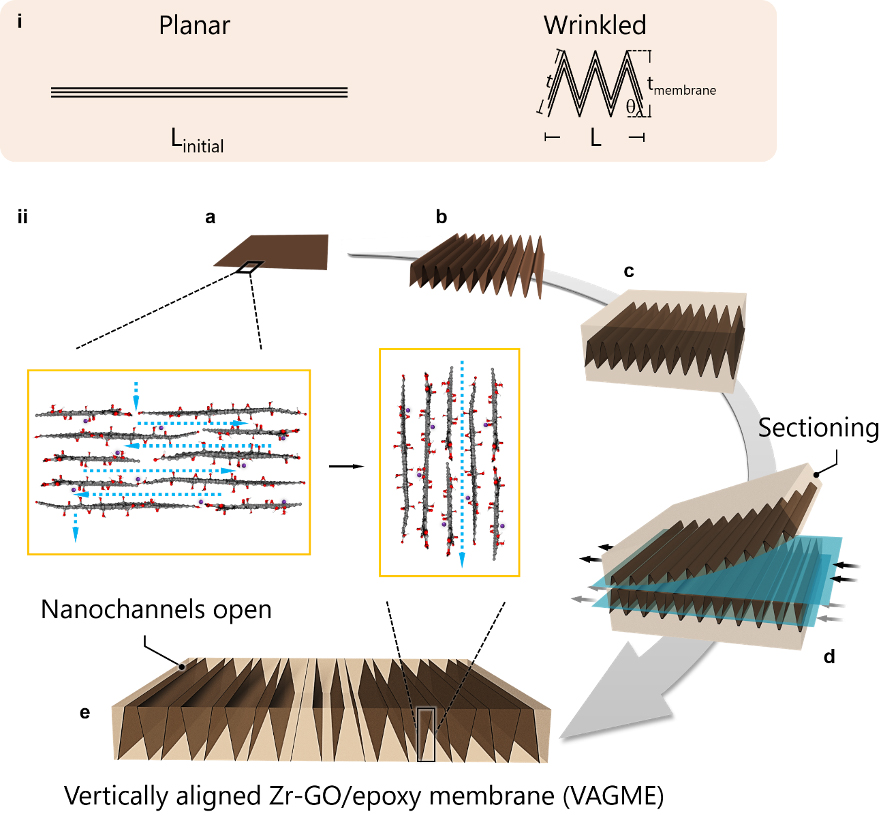 “When you start wrinkling the graphene, you’re tilting the sheets and the channels out of plane,” says materials scientist Muchun Liu from the Massachusetts Institute of Technology (MIT).

“If you wrinkle it a lot, the channels end up being aligned almost vertically.”

To finish the effect, the graphene and substrate are fixed in an epoxy substance, before the tops of the peaks and the bottoms of the valleys are trimmed off. It gives liquid a quicker route through the graphene while still enabling filtration to happen.

Liu and her colleagues have given the new materials the name VAGMEs (vertically aligned graphene membranes), and further down the line they could find uses far beyond making water safe to drink.

“What we end up with is a membrane with these short and very narrow channels through which only very small molecules can pass,” says chemical engineer Robert Hurt, from Brown University.

“So, for example, water can pass through, but organic contaminants or some metal ions would be too large to go through. So you could filter those out.”

The next step will be to put this into practice and work out a practical filtering system, but the theory is sound. The material passed one of its first tests by allowing water vapor to flow through, while trapping larger hexane molecules.

Eventually these VAGMEs could find uses in industrial or household filtering systems, the scientists say – just one of many promising ways that graphene is being put to use in various different scientific fields.

As for the nanochannels that operate between super-thin 2D materials such as graphene, there’s plenty of potential here too, according to the experts. The closer that scientists look at these nanomaterials, the more they discover.

“In the last decade, a whole field has sprung up to study these spaces that form between 2D nanomaterials,” says Hurt.

“You can grow things in there, you can store things in there, and there’s this emerging field of nanofluidics where you’re using those channels to filter out some molecules while letting others go through.”