Humanity just made a weighty decision. On Friday, representatives of more than 60 nations, gathered in Versailles, France, approved a new definition for the kilogram.

Since the 19th century, scientists have based their definition of the fundamental unit of mass on a physical object — a shining platinum iridium cylinder stored in a locked vault in the bowels of the International Bureau of Weights and Measures (BIPM) in Sevres, France.

A kilogram was equal to the heft of this aging hunk of metal, and this cylinder, by definition, weighed exactly a kilogram. If the cylinder changed, even a little bit, then the entire global system of measurement had to change, too.

With Friday’s vote, scientists redefined the kilogram for the 21st century by tying it to a fundamental feature of the universe — a small, strange figure from quantum physics known as Planck’s constant, which describes the smallest possible unit of energy.

Thanks to Albert Einstein’s revelation that energy and mass are related, determining exactly how much energy is in that unit can let scientists define mass in terms of Planck’s constant — a value that should hold up across space and time — rather than relying on an inconstant metal cylinder. (Mass determines something’s weight, and for most purposes mass and weight are interchangeable.)

The redefinition is the result of a decades-long, worldwide quest to measure Planck’s constant precisely enough that the number would stand up to scientific scrutiny.

Though the newly defined kilogram won’t affect your bathroom scale, it will have practical applications in research and industries that depend on meticulous measurement.

Friday’s vote is mostly a formality; everyone involved knew the resolution would pass. But to Jon Pratt, one of the leaders of that global effort, the event is about more than symbolism, bigger than business and beyond even physics.

In this era of violence and vitriol, when it seems there’s so little on which people can agree, Pratt said, the redefinition represents something sublime.

It is an acknowledgment of an immutable truth — that nature has laws to which all of us are subject. And it’s one more step toward a lofty dream — that, in understanding nature’s laws, scientists can help build a better world. 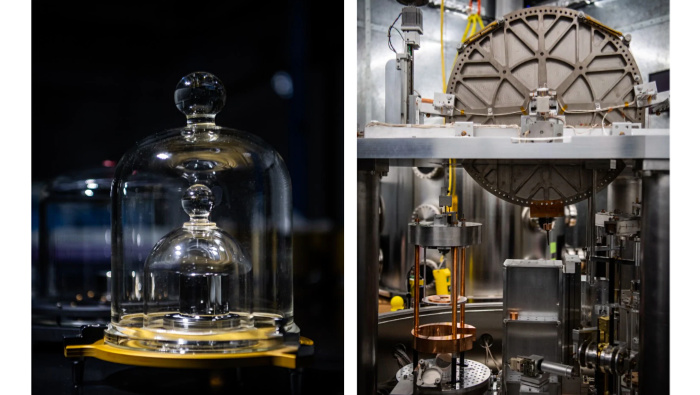 At the National Institute of Standards and Technology (NIST) in Gaithersburg, Md., where Pratt works, measurement is often described as the “invisible infrastructure” of the modern world. Everything a person does — whether it’s checking a clock, forecasting the weather, cooking a meal, building a rocket, signing a contract, waging a war — requires measurements of some kind.

The International System of Units, or SI, is what allows us to communicate measurements around the globe. This system, which has its origins in the heady days of the Enlightenment, was meant to end the bickering over the number of Spanish vara in a British furlong and ease the anxieties of a merchant who bought goods in the Netherlands, where the unit of weight was based on the amount of fish that could fit in a ship’s hold, and sold them in France, where weight was tied to the heft of a wheat grain.

The motto of one of the system’s creators, “for all times and for all people,” is among Pratt’s favorite phrases.

In 1875, the signing of the Treaty of the Metre made the system official. Two platinum and iridium prototypes — a meter-length bar and a kilogram-mass cylinder — were forged to serve as the standard units for the whole world. The BIPM distributed copies of each prototype to the signatory nations; the century-old U.S. national kilogram still sits in a glass case in a locked room down the hall from Pratt’s lab.

As science and commerce advanced, the SI expanded to include units for other kinds of measurements and the definitions were revised to allow for greater and greater precision. The meter prototype was ditched in favor of the distance light travels in a vacuum in one 299,792,458th of a second. The length of a second was pegged to the cycles of radiation of the element cesium.

These values — the speed of light, the behavior of atoms, the nature of electromagnetism — are fundamental features of nature that do not change whether the observer is on Earth or Mars, whether it’s the year 1875 or 2018.

But the kilogram prototype, known as “Le Grand K,” was made by humans and is subject to all our limitations.

It is inaccessible — the safe containing the cylinder can be opened only by three custodians carrying three separate keys, an event that has happened fewer than a dozen times in the object’s 139-year history.

And it is inconsistent — when Le Grand K was examined in the 1980s, it weighed several micrograms less than it was supposed to.

This meant that anyone who made products based on the standards had to reissue their weights. Manufacturers were furious. Lawmakers were called. Metrologists, people who study measurements, were accused of incompetence.

It has been more than 100 years since the quantum physicist Max Planck discovered that energy is expressed in discrete units — that is, it’s “quantized.” But his constant — a figure that describes the size of these energy packets — has been hard to pin down.

There are only two experimental setups that allow scientists to calculate this number, and both require rare and expensive tools.

One technique involves counting all the atoms in a perfectly round silicon sphere.

The second option uses an exquisitely accurate weighing machine known as a watt balance, which measures an object’s mass by calculating the force needed to lift it. 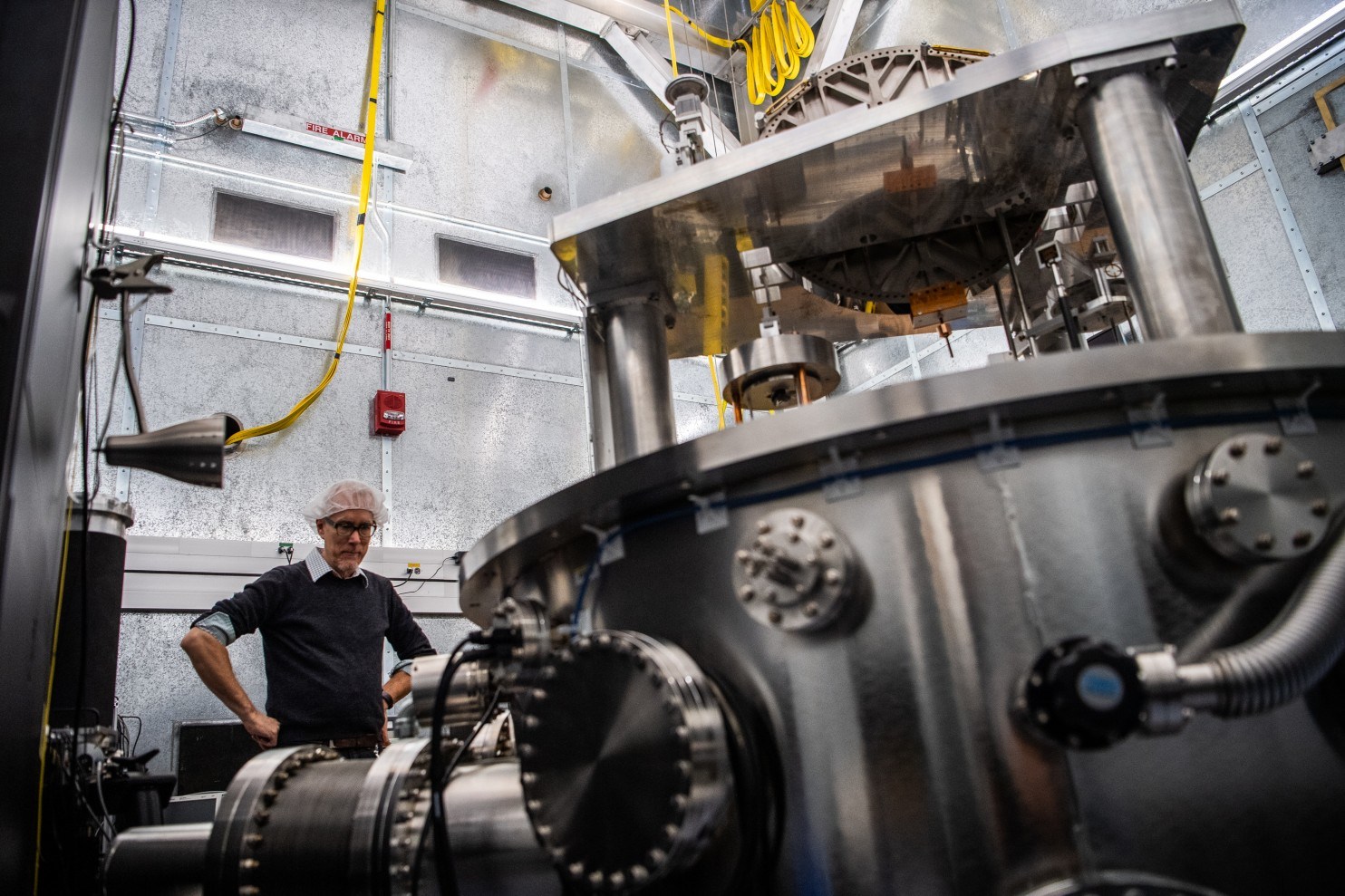 This is no ordinary scale; it took a pair of British scientists several decades to invent and refine the instrument, and there are only two in the world powerful enough to meet the BIPM’s high standards for precision.

One is in Canada. The other sits inside Pratt’s lab in the NIST basement.

“It really is a beautiful instrument,” Pratt said during a visit this week to the steel-encased room where the balance is stored. “I like to just come here and stare at it.”

The enormous metal machine, which took five years to build, is as tall as a professional basketball player and shiny as a disco ball, with a tungsten carbide fulcrum on which the balance hinges and a one-ton magnet that helps generate a force. While experiments are run, the entire balance is placed inside a vacuum chamber.

Anyone who operates the instrument must wear a hairnet, a lab coat and bootees. Pratt and his colleagues measure every factor that could possibly affect their result, from the temperature of the room to the strength of Earth’s gravity.

The 2014 resolution required that at least one instrument would need to calculate Planck’s constant to an uncertainty of just 20 parts per billion — or within 0.000002 percent of what is thought to be the correct number.

On June 30, 2017, the day before the deadline to submit a value to the BIPM’s weights and measures committee, Pratt and his team finally published a result that met this standard.

That number may be barely intelligible to the casual observer. But to Pratt, measuring it felt for a moment like some cosmic curtain had been lifted, revealing the innermost workings of the universe.

Here in the echoing basement of an obscure federal agency, he and his crew of hair-netted nerds had gotten as close to one standard for perfection as any human has ever been.

They had transcended their human biases and earthly flaws to make an observation so precise it will work “for all times and for all people” — or at least, until the day when scientists are able to pull back another fold of the curtain, eliminating one more degree of uncertainty about this fundamental fact of physics.

Pratt and his colleagues are not the only scientists who have spent the better part of the past decade in pursuit of Planck’s constant.

Researchers using the watt balance in Canada have achieved a measurement with even less uncertainty than NIST’s. Teams in Germany and Japan produced similarly precise measurements using the silicon-sphere technique.

But not all the measurements agreed. In the metrology community, where careers can be staked on quibbles over decimal points, this discrepancy could have been catastrophic.

“There was a lot of hemming and hawing, and at one point there were questions about whether [the vote] would even happen,” Pratt said.

But that debate, too, was an important part of the process. Only through repeated observations, refutations and confirmations does an idea become a globally accepted fact. It’s what makes science bigger than scientists; it’s how we establish that something is true.

Still, Pratt didn’t wait for the debate to end to get NIST’s value for Planck’s constant tattooed on his forearm — the 10-digit number and an illustration of a statue clutching a meter bar and a kilogram cylinder.

And above it, in French, were the words that have guided metrologists since the beginning: A tous les temps, a tous les peuples.

For all times, for all people.

JWST Has Found Life’s Elemental Building Blocks in The Depths of Darkest Space
Astronomers Just Discovered a ‘Bear’ on Mars
A 17th-Century Aristocrat Had a Crafty Secret For Keeping Her Teeth
‘Extraordinarily Close’ Asteroid About to Zoom Past Earth, NASA Says
People Who Don’t Exist Look More Real Than Actual People, Study Finds