Nuclear fusion offers the tantalizing prospect of a sustainable energy source that can never be exhausted – and scientists at the Massachusetts Institute of Technology (MIT) have announced what they describe as a “watershed moment” in making the technology viable.

Fusion happens when two or more atomic nuclei merge together to create larger elements, releasing massive amounts of energy along the way – it’s what powers stars like our own Sun. Getting it to work on Earth however, in a system that doesn’t use up more energy than it produces, has so far not been possible.

Superconducting magnets have previously been identified as one way of generating the ultra-high temperatures required for nuclear fusion, and now researchers have produced the most powerful one yet: it’s actually the first time that a magnet such as this has been able to generate a sustained magnetic field strong enough for fusion to happen. 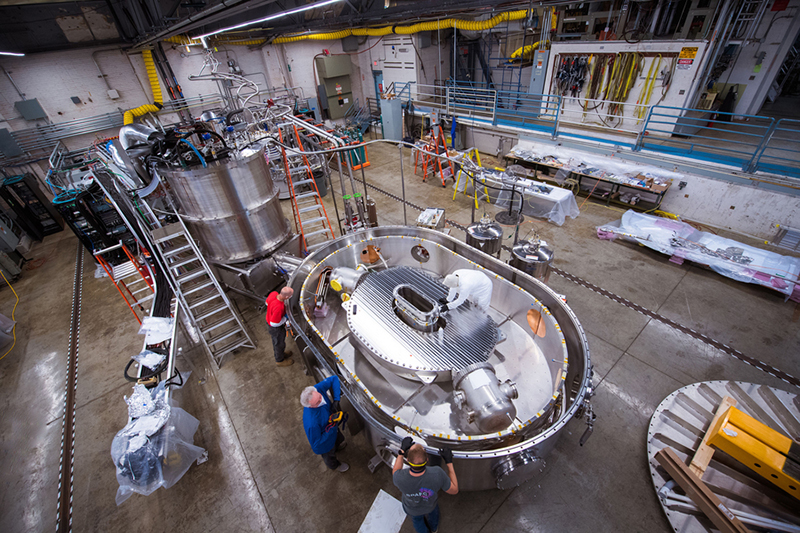 “Fusion in a lot of ways is the ultimate clean energy source,” says geophysicist Maria Zuber, from MIT. “The amount of power that is available is really game-changing.”

Composing 16 plates stacked together, and standing some 3 meters (nearly 10 feet) tall, the new magnet makes use of a superconducting material called ReBCO. With a run-up time of about two weeks, it was able to reach a record-breaking magnetic field strength of 20 tesla, which the team says is enough to make nuclear fusion happen.

Now that it’s proved its capabilities, the MIT scientists and their collaborators at the startup Commonwealth Fusion Systems (CFS) can start figuring out how to fit the device into a nuclear fusion reactor. A circular tokamak design will be used, where trapped plasma can be heated up to temperatures of 100 million degrees Celsius or more, triggering the fusion reactions.

With the compact, modular magnet they’ve developed, the research team says it’s possible to get similar performance in reactors that are 40 times smaller in volume than would have been needed before, if using conventional magnets.

The scaling of the technology is crucial for making fusion power generation practical and cost-effective, so that it can be integrated into the electricity grid.

How the magnet would be placed inside a reactor. (Gretchen Ertl, CFS/MIF-PSFC, 2021)

The fuel used to power the reactor would be the hydrogen isotopes in water – and as we have a nearly unlimited supply of water at our disposal, these reactors could run indefinitely. What’s more, they produce very little in the way of waste.

All the parties involved accept that there’s still a lot more work to do, and plenty more hurdles to overcome, but getting a magnet with these capabilities was one of the biggest challenges the team faced – and now that challenge has been met. Now, progress can be sped up on the other parts of the project.

And we all know we don’t have any time to waste. Earth’s atmosphere is warming at a catastrophic rate, and a substantial reduction in carbon emissions is way overdue. Paired with two things we already should be doing right now – completely phasing out fossil fuels and implementing widely available, highly cost-effective renewable power options, a breakthrough in actually producing fusion power would be just what our planet needs.

The MIT and CFS team is hoping to have a test plant operational by 2025.

“It’s a big moment,” says Bob Mumgaard, CEO of CFS. “We now have a platform that is both scientifically very well-advanced, because of the decades of research on these machines, and also commercially very interesting.

“What it does is allow us to build devices faster, smaller, and at less cost.”

Octopuses Have Favorite Arms They Use to Grab Different Prey
Experiment Reveals What 1 Hour in Nature Does to The Human Brain
One of The World’s Largest Organisms Is Disintegrating. Here’s How We Might Save It.
Even Unborn Babies Find The Taste of Mom’s Kale Salad Repulsive
Ancient Maya Cities Appear to Have Been Riddled With Mercury Pollution