Physicists in the US have discovered a material that could qualify as the first known three-dimensional example of a quantum spin liquid – an exotic theoretical phase of matter.

Quantum spin liquids were first predicted by scientists back in the 1970s. While researchers have studied them for decades, these phases largely remain a theoretical concept, although that’s not the same as saying they don’t exist.

To confuse you further, quantum spin liquids aren’t actually liquids, but a kind of solid, magnetic matter that exhibits a strange form of behaviour at the subatomic particle level, specifically in terms of its electrons.

In quantum mechanics, electrons inside materials have an intrinsic angular momentum called a spin, which sees them pointing either ‘up’ or ‘down’, in terms of measurement (the spin can actually point in any direction).

In magnetic materials, the way this spin happens across electrons is aligned in a kind of stable pattern, which physicists call long-range ferromagnetic order.

“In a liquid, on the other hand, there is no long-range order.”

This is where quantum spin liquids come in. Per the theory – first proposed by Nobel Prize-winning physicist Philip Anderson in 1973 – quantum spin liquids are magnetic solids that would buck this electron spin alignment seen in conventional magnets, although they’re not chaotic either, and quantum entanglement still holds.

“In a frustrated [ie. non-conventional] magnet, the arrangement of electron spins prevents them from forming an ordered alignment, and so they collapse into a fluctuating, liquid-like state,” materials chemist Lucy Clark, who isn’t affiliated with the new research, explained in The Conversation in 2016.

“In a true quantum spin liquid, the electron spins never align, and continue to fluctuate even at the very lowest temperatures of absolute zero, at which the spins in other magnetic states of matter would have already frozen.”

That’s the theory, anyway, and a number of studies have experimentally glimpsed facets of this behaviour in various materials – but according to the team at Rice, nothing seen so far is necessarily definitive. 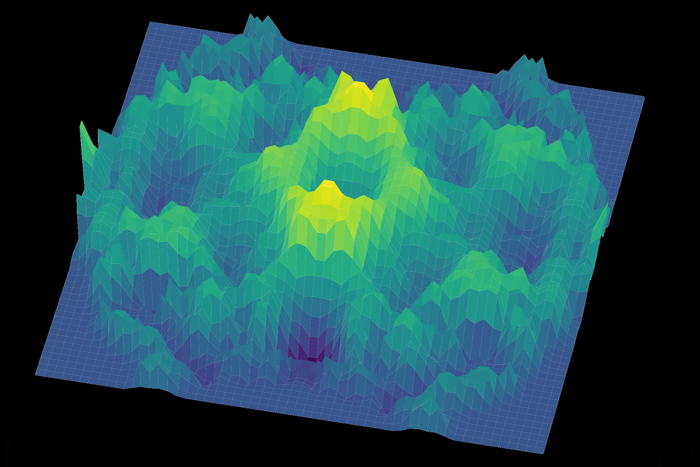 Above: A 3D representation of the spin-excitation continuum, a potential signature of a quantum spin liquid, observed in a cerium zirconium pyrochlore crystal.

“Although we have theoretical models where we know, for a fact, that the result will be a spin liquid, finding an actual physical material that would fulfil those properties has, so far, proven very difficult,” Nevidomskyy says.

“There is no consensus in the field, up to now, that any material – 2D or 3D – is a quantum spin liquid.”

But that hasn’t stopped physicists looking.

Now, a new research effort by Nevidomskyy and his team looks to have found what could be the first candidate for a 3D material that could embody this incredibly elusive state of matter: single crystals of cerium zirconium pyrochlore.

Although the researchers say it’s impossible to irrefutably prove that these crystals (or any material for that matter) constitute a quantum spin liquid, by every theoretical and experimental measure, cerium zirconium pyrochlore looks the part.

“We’ve done every experiment that we could think of on this compound,” explains quantum materials researcher Pengcheng Dai, noting that the crystals exhibited hallmarks of being a quantum spin liquid across a range of different thermodynamic, muon spin relaxation, and neutron scattering experiments.

“Our measurements indicate the absence of long-range order or spin glass behaviour,” the authors write in their paper, “while the neutron spectroscopy finds conclusive evidence for a continuum of fractionalised excitations, as theoretically expected in a [quantum spin liquid].”

While there’s still no hard proof – and theoretically never will be, since achieving a temperature of absolute zero is impossible, among other experimental barriers – this looks to be the strongest and only evidence of a potential quantum spin liquid in three dimensions we’ve seen in almost 50 years.

“A quantum spin liquid is something that scientists define based on what you don’t see,” says Dai.

The findings are reported in Nature Physics.

Mummies With Golden Tongues Discovered in Ancient Egyptian Necropolis
Bats Growl at Each Other Like Death Metal Singers And It’s Probably Not Out of Love
Engineers Propose an Ambitious Plan to Bury Excess Carbon at The Bottom of The Ocean
Mars Once Had So Much Water, It Could Have Been An Ocean World, Scientists Say
Archeologists Rediscover an Ancient Peruvian Fresco That Hasn’t Been Seen In 106 Years