The tiny gravitational field between two 90-milligram spheres of gold has just been measured for the first time.

This makes it officially the smallest gravitational field ever successfully measured – an achievement that could open the door to probing gravitational interactions in the quantum realm.

There’s a big problem with the mathematics we use to describe the Universe; in particular, the way gravity behaves. Unlike the other three fundamental forces in the Universe – weak, strong and electromagnetic – gravity can’t be described with the standard model of physics.

Einstein’s theory of general relativity is the model we use to describe and predict gravitational interactions, and it works beautifully in most contexts. However, when we get down to quantum scales, general relativity breaks down, and quantum mechanics takes over. Reconciling the two models has so far proven very difficult.

Newtonian physics works well for most terrestrial applications, even if it stumbles a little in an astrophysical setting.

But what about really, really small gravitational interactions? Typically, these have been really challenging to measure, because it’s so difficult to uncouple them from the effects of Earth’s gravity and other perturbations. Most tests of gravity on smaller scales have involved masses of at least a kilogram (2.2 pounds).

Now, we’ve gone considerably smaller. To achieve this, a team of scientists led by Tobias Westphal of the Austrian Academy of Sciences in Austria actually turned to the 18th century for inspiration: Namely, the very first experiment to measure gravity between two masses, and give the first accurate values for the gravitational constant.

This was designed by Henry Cavendish, an English scientist who figured out how to effectively nullify Earth’s gravity. He created a torsion balance, attaching lead weights at each end of a horizontally suspended rod.

The attraction between the weights caused the rod to rotate, twisting the wire on which the rod was suspended, allowing Cavendish to measure the gravity based on how much the wire twisted. The set-up came to be known as the Cavendish experiment.

Westphal and colleagues modified the Cavendish Experiment for their tests of gravitational attraction on a small scale. Their masses were tiny gold spheres, each just 1 millimeter in radius and 92 milligrams in weight.

On these scales, the team needed to account for a number of sources of perturbations. Two gold spheres were attached to a horizontal glass rod at a separation of 40 millimeters. One of the spheres was the test mass, the other the counterbalance; a third sphere, the source mass, was moved near the test mass to create a gravitational interaction.

A Faraday shield was used to block the spheres from interacting electromagnetically, and the experiment was conducted in a vacuum chamber to prevent acoustic and seismic interference. 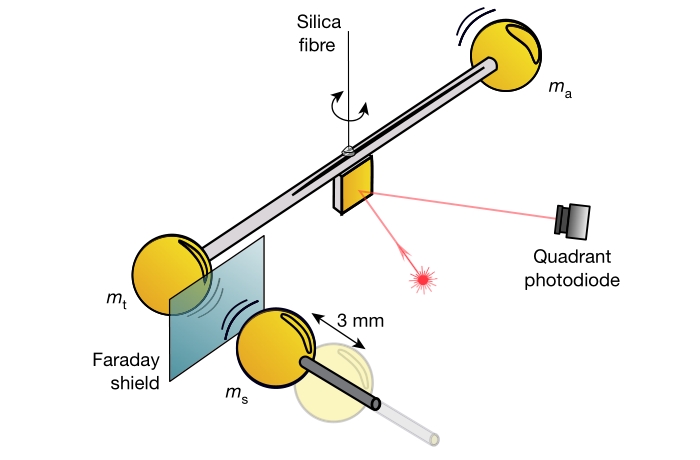 A laser was bounced off a mirror in the center of the rod to a detector. As the rod twisted, the movement of the laser on the detector indicated how much gravitational force was being exerted – and moving the source mass allowed the team to precisely map the gravitational field generated by the two masses.

The researchers found that, even at these small scales, Newton’s universal law of gravitation still holds firm. From their measurements, they were even able to calculate the gravitational, or Newton’s, constant (G), deriving a value just 9 percent from the internationally recommended value. This discrepancy can, they said, be entirely covered by the uncertainties in their experiment, which was not designed to measure G.

In all, their result shows that even smaller measurements may be undertaken in the future. This could help scientists to probe the quantum regime, and potentially offer insights into dark matter, dark energy, string theory, and scalar fields.

“Our experiment provides a viable path to enter and explore a regime of gravitational physics that involves precision tests of gravity with isolated microscopic source masses at or below the Planck mass,” they wrote in their paper.

“This opens up possibilities such as a different approach to determine Newton’s constant, which so far remains the least well determined of the fundamental constants. In general, miniaturized precision experiments may allow tests of the inverse-square law of gravity at considerably smaller scales than possible today.”

Hidden Layers of Melting Rock Found Lurking Beneath Earth’s Crust
We Can Now Hear The ‘Sound’ of One of The Most Beautiful Stars
It’s Possible Neanderthals Evolved So They Wouldn’t Smell Their Own Stink, Study Finds
Astronomers Studied More Than 5,000 Black Holes to Figure Out Why They Twinkle
Orcas Are Contaminated With a Forever Chemical Associated With an Unlikely Product