Once, holograms were just a scientific curiosity. But thanks to the rapid development of lasers, they have gradually moved centre stage, appearing on the security imagery for credit cards and bank notes, in science fiction movies – most memorably Star Wars – and even “live” on stage when long-dead rapper Tupac reincarnated for fans at the Coachella music festival in 2012.

Holography is the photographic process of recording light that is scattered by an object, and presenting it in a three-dimensional way. Invented in the early 1950s by the Hungarian-British physicist Dennis Gabor, the discovery later earned him the Nobel Prize in Physics in 1971.

Beyond banknotes, passports, and controversial rappers, holography has become an essential tool for other practical applications including data storage, biological microscopy, medical imaging, and medical diagnosis.

In a technique called holographic microscopy, scientists make holograms to decipher biological mechanisms in tissues and living cells. For example, this technique is routinely used to analyse red blood cells to detect the presence of malaria parasites and to identify sperm cells for IVF processes.

But now we have discovered a new type of quantum holography to overcome the limitations of conventional holographic approaches.

This groundbreaking discovery could lead to improved medical imaging and speed up the advance of quantum information science. This is a scientific field that covers all technologies based on quantum physics, including quantum computing and quantum communications.

The path of one beam, known as the object beam, illuminates the holography’s subject, with the reflected light collected by a camera or special holographic film.

The path of the second beam, known as the reference beam, is bounced from a mirror directly onto the collection surface without touching the subject.

The hologram is created by measuring the differences in the light’s phase, where the two beams meet. The phase is the amount the waves of the subject and object beams mingle and interfere with each other.

A bit like waves at the surface of a swimming pool, the interference phenomenon creates a complex wave pattern in space that contains both regions where the waves cancel each other (troughs), and others where they add (crests).

Interference generally requires light to be “coherent” – having the same frequency everywhere. The light emitted by a laser, for example, is coherent, and this is why this type of light is used in most holographic systems.

So optical coherence is vital to any holographic process. But our new study circumvents the need for coherence in holography by exploiting something called “quantum entanglement” between light particles called photons.

Conventional holography fundamentally relies on optical coherence because, firstly, light must interfere to produce holograms, and secondly, light must be coherent to interfere. However, the second part is not entirely true because there are certain types of light that can be both incoherent and produce interference.

These pairs carry a unique property called quantum entanglement. When two particles are entangled, they are intrinsically connected and effectively act as a single object, even though they may be separated in space. As a result, any measurement performed on one entangled particle affects the entangled system as a whole.

In our study, the two photons of each pair are separated and sent in two different directions.

One photon is sent towards an object, which could be, for example, a microscope slide with a biological sample on it. When it hits the object, the photon will be slightly deviated or slowed a bit depending on the thickness of the sample material it has passed through. But, as a quantum object, a photon has the surprising property of behaving not only as a particle, but also simultaneously as a wave.

Such wave-particle duality property enables it to not only probe the thickness of the object at the precise location it hit it (as a larger particle would do), but to measure its thickness along its entire length all at once. The thickness of the sample – and therefore its three-dimensional structure – becomes “imprinted” on to the photon.

Because the photons are entangled, the projection imprinted on one photon is simultaneously shared by both.

The interference phenomenon then occurs remotely, without the need to overlap the beams, and a hologram is finally obtained by detecting the two photons using separate cameras and measuring correlations between them. 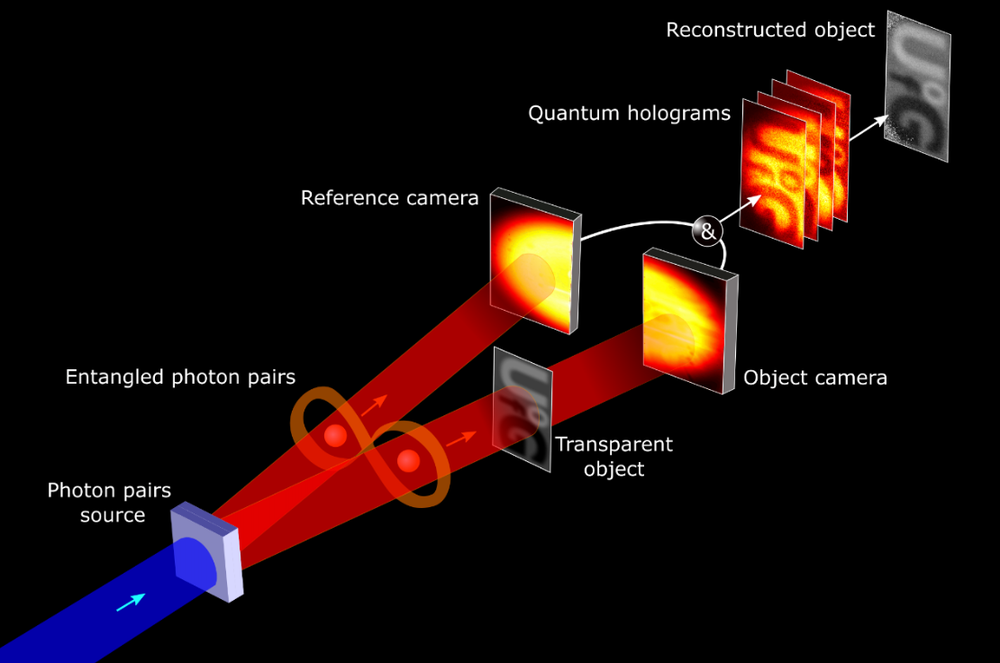 How a hologram is created using entangled photons. (University of Glasgow)

The most impressive aspect of this quantum holographic approach is that the interference phenomenon occurs even though the photons never interact with each other and can be separated by any distance – an aspect that is called “non-locality” – and is enabled by the presence of quantum entanglement between the photons.

So the object that we measure and the final measurements could be performed at opposite ends of the planet.

Beyond this fundamental interest, the use of entanglement instead of optical coherence in a holographic system provides practical advantages such as better stability and noise resilience. This is because quantum entanglement is a property that is inherently difficult to access and control, and therefore has the advantage to be less sensitive to external deviations.

These advantages mean we can produce biological images of much better quality than those obtained with current microscopy techniques. Soon this quantum holographic approach could be used to unravel biological structures and mechanisms inside cells that had never been observed before.

Scientist Accidentally Discovers The Oldest Brain of Any Vertebrate
Bar Graphs Induce a Hidden Bias in Interpretation, Experiment Shows
A Mysterious Whirlpool Appeared Over Hawaii, And It Could Be Because of SpaceX
Incredible ‘Fairy’ Robot Sails on The Breeze Like a Floating Dandelion
Physicists Used Sound Waves to Give a Tiny Sun Its Own Kind of Gravity