We’ve got another quantum computing milestone to report, with researchers in China unveiling a super-advanced 66-qubit quantum supercomputer called Zuchongzhi, which by one important metric is the most powerful machine of its kind we’ve seen to date.

The performance of Zuchongzhi is undoubtedly impressive: it finished a designated quantum benchmark task in around 70 minutes, and its creators claim the world’s most powerful ‘classical’ (non-quantum) supercomputer to date would need around eight years to get through the same set of calculations.

That means Zuchongzhi can claim quantum supremacy, a status in quantum computing that indicates a machine can complete tasks beyond the best classical computers. It’s a bar that’s been reached before, but very rarely.

“Our work establishes an unambiguous quantum computational advantage that is infeasible for classical computation in a reasonable amount of time,” the researchers explain in a preprint paper describing the experiment. 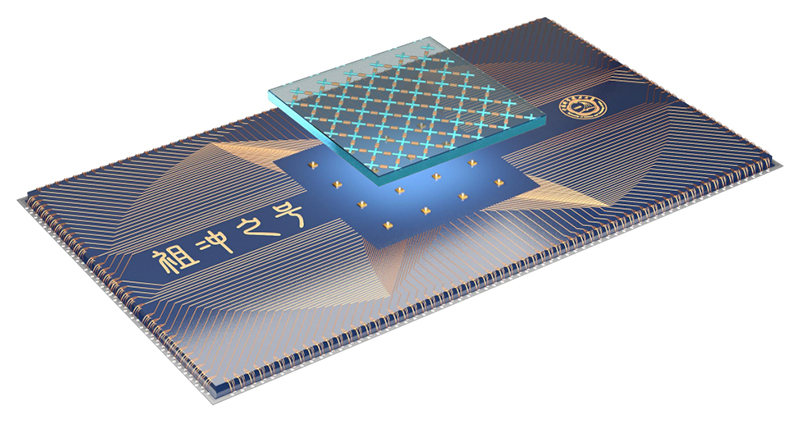 Design schematic of the Zuchongzhi quantum processor. (University of Science and Technology of China)

Qubits or quantum bits have a fundamental advantage over classical computing bits in that they’re not just fixed as 1s or 0s – they can also effectively function as both at once, through a bit of quantum trickery called the superposition, which exponentially increases the available computing power.

While the number of qubits isn’t the only determining factor for how powerful a quantum computer is, it’s perhaps the most important. In this particular piece of research, Zuchongzhi used 56 qubits (of its available 66) to tackle a well-known but very complex computing problem: sampling the output distribution of random quantum circuits.

The task was considered to be roughly 100 to 1,000 times tougher than one previously completed by the 54-qubit Google Sycamore quantum computer, and it shows the sort of major performance difference that each additional qubit can make.

But it’s worth noting that there are different approaches to quantum computing: Zuchongzhi uses optical circuits and photons to manage and process its qubits, whereas Sycamore is based on electrons and superconductors. There can also be differences in how results are calculated and measured.

Versatility is also a vital consideration – whether a quantum computer can perform multiple tasks or just a single one that it was specifically designed for (both Sycamore and Zuchongzhi score highly here, and can take on multiple tasks).

With all that in mind, comparing these machines against each other isn’t always helpful or particularly insightful, though there’s little doubt that what we have here is another crucial step forward for quantum computing.

With so many prototype quantum computers around, you might wonder why some scientists still question whether quantum computing will ever become practical technology. That’s because the machines in use today remain experimental, and require very precise, super-cold lab conditions in order to operate, usually for very short periods of time.

In other words, you’re not going to get a quantum computer on your desk just yet – though with each milestone that scientists are able to reach, we’re getting a little closer to realizing the true potential of quantum computing.

We should include a note of caution about these results, as the research has yet to be peer-reviewed, but given the team’s track record and the detail of their experiments, this is certainly worthy of our attention – and physicist Peter Knight, from Imperial College London in the UK, is one scientist who has welcomed the developments.

“I’m very excited by this,” Knight, who wasn’t involved in the research, told New Scientist. “What this has done is really demonstrate what we’ve always thought we knew, but didn’t have proved experimentally, that you can always beat a classical machine by adding a few more qubits.”

Astronomers Just Discovered a ‘Bear’ on Mars
Mysterious White Clouds Keep Popping Up Near The Bahamas, And No One Knows Why
Archaeologists May’ve Discovered The ‘Oldest’ And ‘Most Complete’ Egyptian Mummy Yet
Ripples in Space-Time Could Actually Reveal When Time Began
There’s a ‘Lost City’ Deep in The Ocean, And It’s Unlike Anything We’ve Ever Seen