You probably don’t stop to think about this often, but right after the birth of the Universe, matter was not in the form we recognise today.

Instead, scientists think it was very much in a state of soup, ‘quark soup’ to be precise – a state also known as quark-gluon plasma.

Now, researchers say they’ve managed to shape ultra-hot, ultra-small liquid droplets of this soup in the lab – possibly allowing us to peer back to the very first microseconds of existence.

Expanding drops of quark-gluon plasmas were created in three geometric shapes – circles, ellipses and triangles – by using a massive particle collider to smash together protons and neutrons at such high speeds and temperatures that they break up.

One of the key findings from the experiment is that these tiny quark-gluon plasma drops behave like fluids, even at the smallest scales. That’s something scientists had originally thought was impossible, but have now seen more and more evidence for.

“Our experimental result has brought us much closer to answering the question of what is the smallest amount of early Universe matter that can exist,” says one of the team, Jamie Nagle from the University of Colorado Boulder.

So what exactly is quark-gluon plasma? It’s a liquid-like state, but one that exists at searing temperatures, where conditions are too hot to form atoms. As the name suggests, it’s made up from quarks and gluons, elementary particles that combine to make up protons and neutrons.

While these particles eventually cooled enough to form regular matter that makes up our world today, the properties of this plasma remain fascinating for scientists – properties which tell the story of the very beginnings of the Universe and everything in it.

Since the turn of the century, experiments at the Relativistic Heavy Ion Collider (RHIC) at Brookhaven National Laboratory in New York have suggested that quark-gluon plasmas might behave like near-perfect fluids. 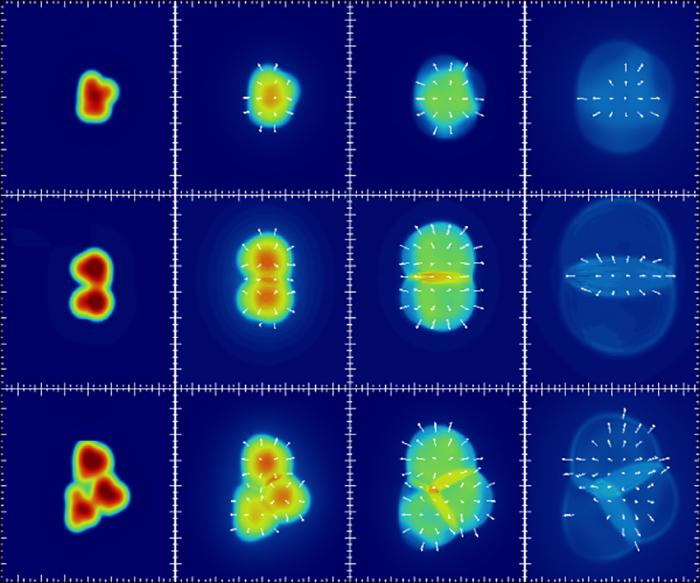 “If you could have a bottle of this liquid on your desk, and you were to tip it over and have it flow around an obstacle, it would do so with almost no friction,” says one of the researchers, Paul Romatschke from CU Boulder.

That’s what this latest experiment was designed to test: whether quark soup droplets would keep their shape even at the tiniest sizes, fitting with the liquid hypothesis.

The resulting circles, ellipses and triangles are the strongest evidence yet that this is indeed the case, even when only a couple of protons are colliding.

The new research backs up previous studies carried out at the RHIC on quark-gluon plasmas. Specialist labs have been producing them for several years in a variety of conditions, but they blink in and out of existence incredibly quickly, and can be challenging to analyse.

There’s plenty more to explore about this earliest form of matter, but we’re already well on our way to learning exactly how quark soup became actual matter. Eventually, we could unlock more secrets about how the Universe is expanding.

Next, the lab team at the Brookhaven National Laboratory are busy setting up experiments to test the properties of quark-gluon plasmas at even smaller scales.

“How small can a system be and still exhibit collective behaviour?” says one of the researchers, Victoria Greene from Vanderbilt University in Tennessee.

“The idea that you can replicate the Big Bang in miniature in the laboratory and understand that the early state of the Universe was this perfect liquid state could inform cosmological models.”

The findings have been published in Nature Physics.

An Expert Explains Why The Radioactive Water Stored at Fukushima Should Be Released
The True Extent of Global Warming Has Been Hidden, Scientists Warn
A Rare Green Comet Can Be Seen in The Sky, And It May Be Our Last Chance
People Who Don’t Exist Look More Real Than Actual People, Study Finds
This Asteroid Has Survived For 4 Billion Years. That Could Be a Huge Problem