Finally, 130 years after it was established, the kilogram as we know it is about to be retired. But it’s not the end: a new definition will be put in place – one that’s far more accurate than anything we’ve had until now.

Tomorrow, on 16 November, the General Conference on Weights and Measures (CGPM) in Versailles is going to vote to officially make the change. Le kilogramme est mort, vive le kilogramme.

It needs to be precise, and it needs to be constant, preferably based on the laws of our Universe as we know it.

But of the seven base units of the International System of Units (SI), four are not currently based on the constants of physics: the ampere (current), kelvin (temperature), mole (amount of substance) and kilogram (mass).

“The idea,” explained Emeritus Director of the International Bureau of Weights and Measures (BIPM) Terry Quinn to ScienceAlert, “is that by having all the units based on the constants of physics, they are by definition stable and unaltering in the future, and universally accessible everywhere.”

A kilogram is defined by… a kilogram.

No, literally. It’s a kilogram weight called the International Prototype of the Kilogram (IPK), made in 1889 from 90 percent platinum and 10 percent iridium, and kept in a special vault in the BIPM headquarters.

In fact, the kilogram is the only base unit in the SI still defined by a physical object. 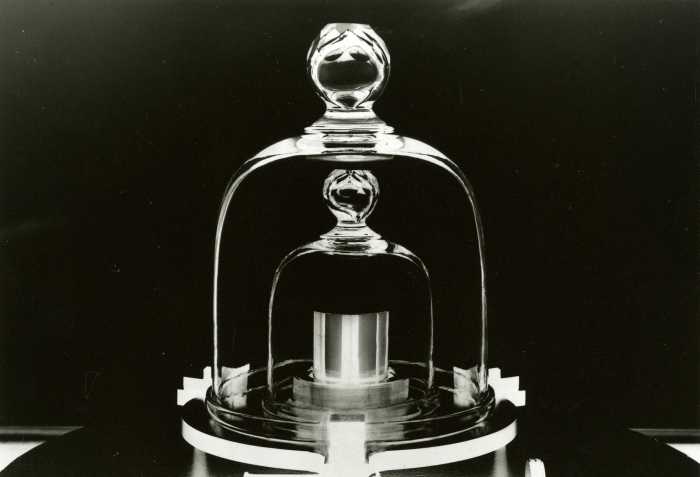 One of the IPK copies in its double bell jars. (NIST)

There are copies of the IPK in various locations around the world, which are used as national standards and occasionally sent back to France to be compared against the prototype.

And that’s where things get interesting – the mass of these copies has been observed to be drifting away from that of the IPK locked away in the vault. It’s unclear whether the copies were losing mass or the IPK was gaining mass, but neither scenario is ideal for scientific precision, even if we’re dealing with mere micrograms.

For the last few years, metrologists have been talking about the need for a new standard. Now, they’re finally ready to redefine the kilogram based on the Planck constant, the ratio of energy to frequency of a photon, measured to its most precise value yet only last year.

“It is only now that we can define the kilogram in terms of a constant of physics – the Planck constant, the speed of light and the resonant frequency of the caesium atom,” Quinn explained.

“Why all three? This is because the units of the Planck constant are kgm2s-1, so we need first to have defined the metre (in terms of the speed of light) and the second (in terms of the caesium atom in the atomic clock).”

So under the new definition, the magnitude of a kilogram would be “set by fixing the numerical value of the Planck constant to be equal to exactly 6.626 069… × 10–34 when it is expressed in the SI unit s–1 m2 kg, which is equal to J s.”

Because, as noted, base unit standards can rely on other base units. The candela, the ampere, and the mole will be redefined to greater accuracy based on the kilogram. And, as for scientists…

“[The new definition] will considerably improve the understanding and elegance of teaching about units,” Quinn said. “It will open up the way to unlimited improvements in accuracy of measurements, it will improve greatly the accuracy and extend the possibilities of making accurate measurements at very small and very large quantities.”

It will be the end of an era, truly – and also the beginning of a new one.

As for the IPK itself, the small piece of metal that has been so important for so many years will continue to be kept in the same conditions it always has, under two bell jars in a climate-controlled vault.

That’s partly to honour its legacy; but scientists will always be scientists. It will also be studied “in future years and decades we can observe how much its mass changes,” Quinn said, this time against the new, immutable definition of the kilogram. So finally we’ll be able to tell for sure if it has actually been losing mass all this time.

Quinn also noted that, while it may look complex, the new system can actually be easily understood by anyone. He himself built a simple balance out of Lego in his basement that can measure directly against the Planck constant, within 5 percent.

“School children,” he said, “will be able to have immense fun with this.”

The vote will take place on 16 November at the 26th General Conference on Weights and Measures in Versailles, France. If the ayes have it – as they undoubtedly will – the new kilogram definition will come into effect on World Metrology Day: 20 May 2019.

Mysterious Medieval City in Africa Had a Genius System to Survive Drought
Are Your Cats Playing or Fighting? Researchers Think They Can Tell The Difference
Bar Graphs Induce a Hidden Bias in Interpretation, Experiment Shows
Archaeologists May’ve Discovered The ‘Oldest’ And ‘Most Complete’ Egyptian Mummy Yet
AI Predicts We’ll Breach Our Climate Goal in Just 10 Years