Thousands of kilometers under Earth’s surface, under crushing pressures and scorching temperatures, the core of the planet can be found. There, an inner core consisting of a solid ball of nickel and iron is super-rotating inside the outer core, where the iron and nickel are fluid.

The conditions of this outer core have now been recreated in a lab, by a team led by physicist Sébastien Merkel of the University of Lille in France – in such a way that scientists have been able to observe the structural deformation of iron.

This not only has implications for understanding our own planet, but can help us to better understand what happens when chunks of iron collide in space.

“We didn’t quite make inner core conditions,” said physicist Arianna Gleason of the US Department of Energy’s SLAC National Accelerator Laboratory. “But we achieved the conditions of the outer core of the planet, which is really remarkable.”

Under normal Earth conditions, the crystal structure of iron is a cubic lattice. The atoms are arranged in a grid, with atoms at the corner of each cube, and one at the center. When iron is compressed under extremely high pressures, this lattice changes shape, deforming into a hexagonal structure. This allows more atoms to be packed into the same volume of space.

The team at SLAC deployed two lasers. The first was an optical laser, fired at a microscopic sample of iron, subjecting it to a shock that generated intense pressure and heat.

The next, and arguably more challenging, part was to measure the atomic structure of the iron during this process. For this, the team used SLAC’s Linac Coherent Light Source (LCLS) X-ray free-electron laser, which probed the sample as the optical laser fired.

“We were able to make a measurement in a billionth of a second,” Gleason said. “Freezing the atoms where they are in that nanosecond is really exciting.”

The resulting images, compiled into a sequence, revealed that iron responds to the additional stress induced by these conditions by twinning. This is when a crystal lattice becomes so compressed that some of the lattice points become shared by multiple crystals in a symmetrical manner. 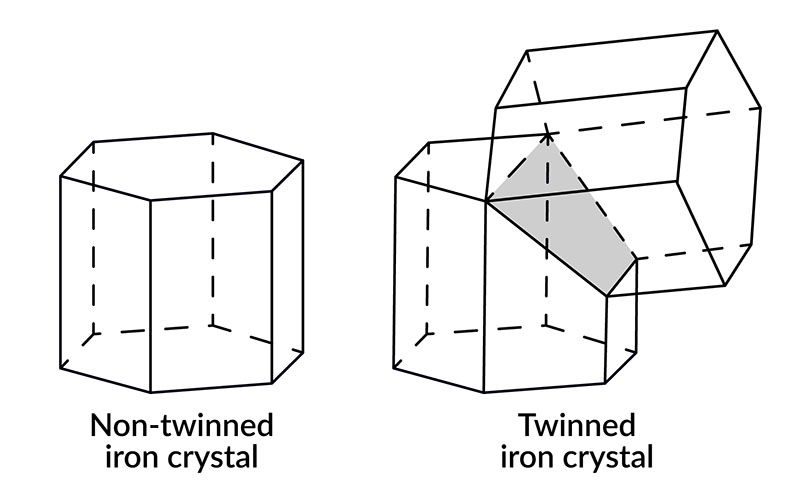 For iron at outer terrestrial core conditions, this means that the atomic arrangement gets pushed so that the hexagonal shapes rotate by nearly 90 degrees. This mechanism, the researchers said, allows the metal to withstand extremity.

“Twinning allows iron to be incredibly strong – stronger than we first thought – before it starts to flow plastically on much longer time scales,” Gleason said.

Now that we know how iron behaves under such conditions, this information can be incorporated into models and simulations. This has important implications for the way we understand space collisions, for example. Earth’s core is tidily tucked away inside a planet, but there are highly metallic asteroids that we think are the exposed, naked cores of planets whose formation got disrupted.

These objects can undergo collisions with other objects that may deform the structure of the iron therein. Now we have a better idea of how this happens. And, of course, we now know a little bit more about our own planet.

“The future is bright now that we’ve developed a way to make these measurements,” Gleason said.

“Now we can give a thumbs up, thumbs down on some of the physics models for really fundamental deformation mechanisms. That helps to build up some of the predictive capability we’re lacking for modeling how materials respond at extreme conditions.”

The research has been published in Physical Review Letters.

REM Sleep May Exist to Heat Your Brain Up From The Inside
It’s Not Just Men in Power Who Use Unwanted Sexual Behavior For Gain
Why Do We Laugh? New Study Suggests It May Be a Survival Strategy
A Weird Blob of Hot Gas Is Whizzing Around Sagittarius A* With ‘Mind-Blowing Velocity’
Astronomers Think They’ve Figured Out How to Predict When a Supernova Will Occur