Let’s admit it: It’s been a pretty rough year for our neck of the Solar System. But it’s been a great year for scientists studying more distant reaches of the Universe. From a colossal explosion to mystery burps deciphered, here were some of the top stories in physics in 2020.

What might have been the Universe’s most powerful known explosion was detected back in 2016 – but it really happened over 390 million years ago. While the first four-legged critters crawled onto land, a supermassive black hole in the Ophiuchus cluster launched a jet that blew a gargantuan cavity in the surrounding gas.

In 2020, astronomers revisited the old data and realized just how powerful that explosion was: five times 10^54 joules of energy. For perspective, that’s enough energy to literally rip apart all 300 billion stars in the Milky Way and a hundred more galaxies.

9. I can see my Solar System from here

If you want to navigate among the stars, you’re going to need a map. And that’s exactly what the European Space Agency’s Gaia space observatory created, using data on over 1.8 billion cosmic objects.

The haul includes stars near and far, asteroids, comets and more. Want to know the position, velocity, spectrum and more for 0.5 percent of the population of our galaxy? You’re in luck. Over 1,600 papers have already been published with Gaia data, and astronomers will be sure to mine the database for years to come. And here’s the best part: There’s even more data to come.

In 2020, the world lost one of its foremost and celebrated supersmart folks, Freeman Dyson. A man of unbounded imagination, he is perhaps best known in popular science circles for his conception of the Dyson sphere. (He didn’t name it after himself; that came later.)

A Dyson sphere is a hypothetical megastructure that completely encloses a star to harvest 100 percent of its solar energy – exactly the energy a hyper-advanced civilization might need to do hyper-advanced things.

So far, astronomers have not detected any Dyson spheres in our galaxy or any others, but Freeman’s dream lives on.

7. We found life on Venus, and then we didn’t

It was too good to be true: claims of solid evidence for life in the cloud tops of Venus, an otherwise hellhole of a world. The reasoning was based on phosphine, a peculiar (and stinky) chemical emitted on Earth by anaerobic bacteria.

To get as much phosphine in the atmosphere as was claimed, scientists proposed, Venus would need a large population of airborne microbes. Alas, further analysis reduced the observed amount of the stinky stuff (to levels barely considered noteworthy, let alone a sign for life), and in some analyses, removed it altogether as just another noisy signal.

Everyone loves a good fast radio burst (FRB), right? The source of these enigmatic, energetic signals has been an annoying puzzle to astronomers for more than a decade. FRBs are fast, high-powered, frequency-hopping radio signals coming from all over the sky, which makes it hard to pinpoint their origin.

But finally, in 2020, astronomers got lucky: They found an FRB source in our own cosmic backyard. Follow-up observations revealed the culprit: an exotic star known as a magnetar (a super-magnetized dead stellar core).

Apparently, magnetars sometimes burp out a tremendous amount of pent-up energy, which appears to Earthbound observers as a quick blast of radio emission.

5. Wet Mars after all

Mars has liquid water. No, it’s bone-dry. No, wait; it sometimes has water. No, nope, never mind. The Red Planet has been teasing astronomers for decades on the vital question of whether it’s home to any liquid water at all.

Astronomers care because, where there’s water, there’s a potential home for life. Earlier this year, astronomers claimed that there isn’t just one, but four lakes of liquid water on Mars. The catch?

They’re incredibly salty – more like a briny sludge than something to take a dip in – and buried under a mile of frozen carbon dioxide at the southern polar cap. Not everybody is convinced, though, so don’t pack your Martian swimsuit just yet.

2020 was surely the year of the Solar System. Three independent spacecraft have successfully acquired samples and sent them on their way back to Earth.

NASA launched its OSIRIS-REx mission to the asteroid Bennu, which collected so much material that its sample container leaked. The Japanese Hayabusa2 mission took a poke at the asteroid Ryugu and landed the material safely back to Earth.

And the Chinese Chang’e 5 lander went on a mission to the Moon, managing to launch a sample back to Earth before the lander broke down.

Astronomers have used gravitational waves (ripples in the fabric of space-time) to observe so many black hole collisions that by now, it’s hardly newsworthy.

But in 2020, astronomers announced the discovery of the biggest collision yet: a titanic merger of an 85-solar-mass black hole and a 66-solar-mass black hole. Post-merger, the resulting black hole tipped the scales at 142 times the mass of the Sun. (About nine Suns’ worth of mass was converted into pure energy.)

In other black hole news, the Universe’s ultimate Pandora’s box was the subject of this year’s Nobel Prize in physics.

2. Is it getting hot in this superconductor?

Superconductors are super-neat. Due to the weirdness of quantum mechanics, under very special conditions, electrons can buddy up, with the pairs traveling together without losing energy. That means a game-changing technology where electricity can flow forever without resistance. 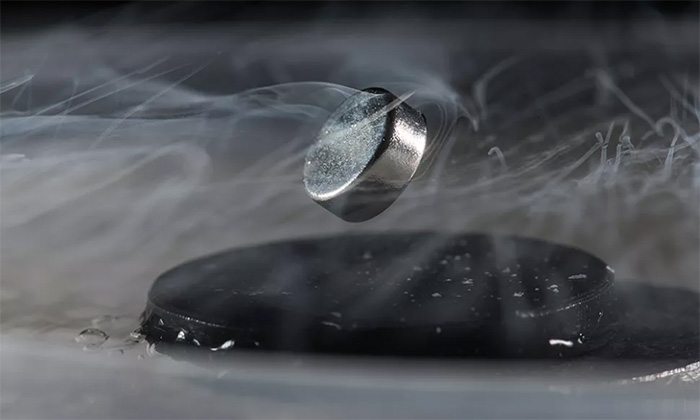 Unfortunately, to make superconductors work, physicists have had to make everything super-cold. But in 2020, researchers announced the discovery of a superconductor at nearly room temperature, just 59 degrees Fahrenheit (15 degrees Celsius). The catch? You need to re-create the pressures found in Earth’s center.

The novel coronavirus SARS-CoV-2 has devastated humanity, reaching pandemic levels in only a couple of months and washing across the globe. But we’re fighting back with one of our most powerful weapons: vaccines.

(Jason McLellan/Univ. of Texas at Austin)

The current vaccines target a very specific part of the virus, a “spike” protein that it uses to invade our cells. One of the first steps in the war against COVID-19 was to identify and map that protein, which researchers accomplished earlier this year, using a physics-based technique called cryogenic electron microscopy.

Using this map, drugmakers could target this feature of the virus for vaccines to mimic, giving our immune systems a fighting chance.

Archaeologists Find Hidden Ruins of ‘Complete’ Roman-Era City in Egypt
An Expert Explains Why The Radioactive Water Stored at Fukushima Should Be Released
Scientists Have a Plan to Turn Earth Into a Giant Observatory
There’s a ‘Lost City’ Deep in The Ocean, And It’s Unlike Anything We’ve Ever Seen
‘Extraordinarily Close’ Asteroid About to Zoom Past Earth, NASA Says