The image you see above is something theoretical physicists have described as groundbreaking: a type of fractal called a Sierpinski triangle, created out of electrons on the quantum scale. It’s unbelievably small – and it could reveal new and strange things about electrons.

Electrons are a fundamental subatomic particle found in all atoms. They help bind atoms together, and are also vital to the flow of electricity – which is basically the exchange of electrons, known as a current.

Most fractals – a mathematical figure that can infinitely scale down, recursively repeating itself all the way – have what we call fractal dimensions. These are not dimensions in Euclidean space, as such, but a way of quantifying the complexity of fractals as a ratio of the change in detail to the change in scale.

So while a line has one dimension and a square has two, a squiggly line inside the square that doesn’t fill it can have a dimension between the two related to its complexity. (If you want to learn how to calculate them, you can read more here.)

In this context, the Sierpinski triangle has 1.58 dimensions. 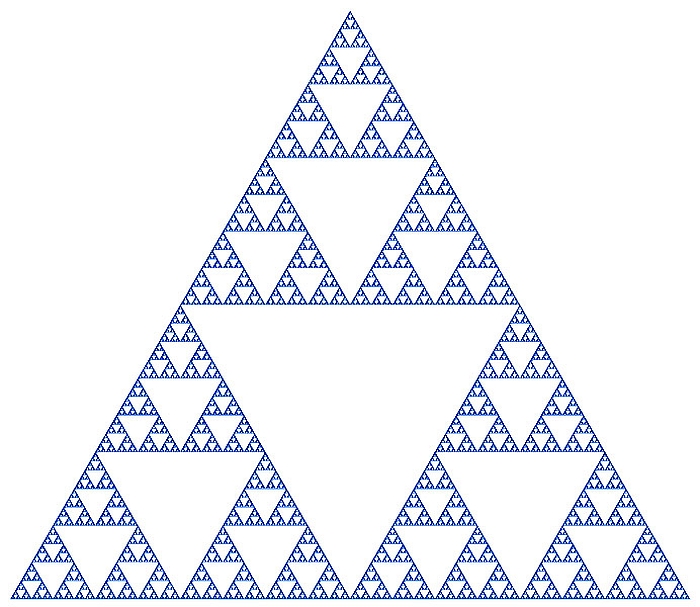 Strap yourself in, as this is where it gets wild and amazing.

Researchers from Utrecht University in the Netherlands wanted to find out what happens to electrons in a quantum fractal, so they built a quantum simulator to find out.

They placed carbon molecules on a copper background in a careful layout using a scanning tunnelling microscope.

The resulting Sierpinski triangles are jaw-droppingly small – less than 20 nanometres across one side. For context, the average width of the human hair is around 100,000 nanometres.

Let that sink in for a moment.

“From a theoretical point of view, this is a very interesting and groundbreaking result,” said theoretical physicist Cristiane de Morais Smith of Utrecht University.

That’s not really a surprise, but by calculating the electronic wave function, the researchers found that the electrons are confined to their weird dimension, and the wave functions inherit it accordingly.

It’s a fascinating result – and there’s so much more to be learnt.

“It opens a whole new line of research, raising questions such as: what does it actually mean for electrons to be confined in non-integer dimensions? Do they behave more like in one dimension or in two dimensions? And what happens if a magnetic field is turned on perpendicularly to the sample?” de Morais Smith said.

“Fractals already have a very large number of applications, so these results may have a big impact on research at the quantum scale. One thing is for sure: the future of electronics looks fractastic!”

The team’s research has been published in the journal Nature Physics.

Astronomers Studied More Than 5,000 Black Holes to Figure Out Why They Twinkle
‘Polluted Realism’: How Monet’s Art Mirrors The Evolution of Smog
Ancient Goo Spills The Secrets of How The Egyptians Mummified Their Dead
Astronomers Find What May Be a Habitable World 31 Light-Years Away
Incredible ‘Fairy’ Robot Sails on The Breeze Like a Floating Dandelion