A two-dimensional material with similar physical properties to graphene has now turned out to blow graphene out of the water in terms of toughness.

The material is called hexagonal boron nitride (h-BN), and it’s so resistant to cracking that scientists are gobsmacked. The finding flies in the face of the fundamental description of fracture mechanics that scientists have been using to predict and define toughness since the 1920s.

“What we observed in this material is remarkable,” said materials scientist Jun Lou of Rice University. “Nobody expected to see this in 2D materials. That’s why it’s so exciting.”

Hexagonal boron nitride is actually extremely similar to graphene. The two materials both consist of hexagonal lattices of atoms. In the case of graphene, all those atoms are carbon; but for h-BN, each hexagon contains three boron atoms and three nitrogen atoms.

Carbon-carbon bonds are among the strongest in nature, so it’s expected that graphene would be much stronger than h-BN. In general, that’s true: The two materials have similar values for strength and elasticity, but h-BN’s are slightly lower. Graphene has a strength of about 130 gigapascals for strength and 1.0 terapascals for elasticity; h-BN’s values are 100 gigapascals and 0.8 terapascals respectively.

However, graphene also has a low resistance to cracks; in other words, it’s remarkably brittle.

“We measured the fracture toughness of graphene seven years ago, and it’s actually not very resistant to fracture,” Lou explained. “If you have a crack in the lattice, a small load will just break that material.”

It was thought that, because h-BN’s other properties are very similar to those of graphene, its brittleness would also be comparable – especially because graphene’s brittleness was consistent with the Griffith theory of fracture, laid out by engineer Alan Arnold Griffith in 1921. He found that cracks will propagate when the stress placed on a material is greater than the force holding it together; and the difference in energy is released in the propagation of the crack.

When a team of researchers went to test this out, though, they found something really weird: h-BN’s fracture resistance is 10 times higher than that of graphene’s. That is definitely not consistent with the Griffith theory.

To find out why, the team applied stress to samples of h-BN, using scanning electron microscopy and transmission electron microscopy to observe in the smallest detail possible how the cracks occur. And, after over 1,000 hours of experimentation and the follow-up analysis, they figured it out. 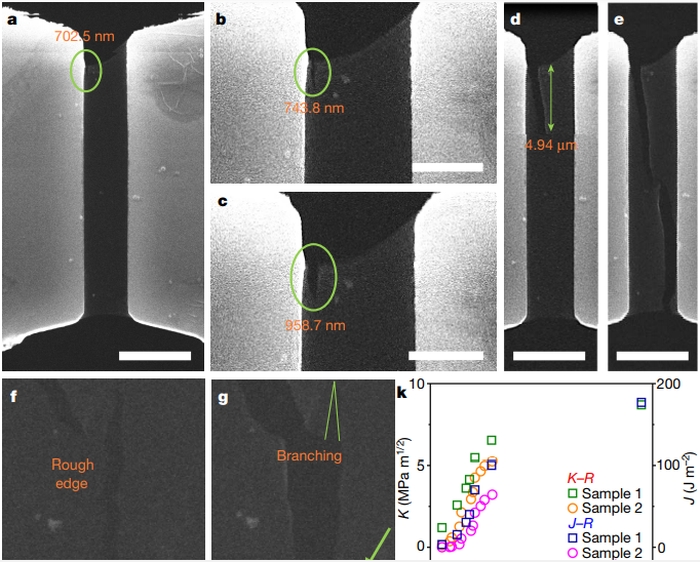 The two materials might be similar, but they’re not exactly the same. In graphene, a crack tends to zig-zag straight through the symmetrical hexagonal structure, from top to bottom. h-BN has a slight asymmetry in its hexagonal structure, due to the contrast in stress between the boron and the nitrogen, which means cracks tend to bifurcate.

This is what makes the material so much more resilient.

“If the crack is branched, that means it is turning,” Lou said. “If you have this turning crack, it basically costs additional energy to drive the crack further. So you’ve effectively toughened your material by making it much harder for the crack to propagate.”

This has implications for the development of flexible 2D materials for use in applications such as electronics. And h-BN already has a host of properties that make it an excellent prospect for these applications, including its heat resistance and chemical stability.

It could therefore provide a new way to develop technologies such as electronic textiles, stick-on electronic tattoos, and even implants.

“What makes this work so exciting is that it unveils an intrinsic toughening mechanism in a supposedly perfectly brittle material,” said mechanician Huajian Gao of Nanyang Technological University in Singapore.

Orcas Are Contaminated With a Forever Chemical Associated With an Unlikely Product
Alarming Spread of Bird Flu Continues as More Species Infected
Ancient Goo Spills The Secrets of How The Egyptians Mummified Their Dead
Stunning Green Comet Will Be Closest to Earth Today, at Peak Brightness
NASA Rover Encounters Spectacular Metal Meteorite on Mars