In recent years scientists have started exploring the concept of anti-lasers – devices that can perfectly absorb a particular wavelength of light, as opposed to emitting it the way a laser does.

Now researchers have published a study that explores the blueprint for building an anti-laser that’s more complex than anything we’ve seen before.

More than an anti-laser, this team’s device is a ‘random anti-laser’: capable of absorbing waves randomly scattered in all directions. This ability could have a variety of potential uses, in everything from phone antennas to medical equipment – anywhere waves are captured.

An anti-laser may sound wild, but it’s actually pretty much what it says on the tin. You can think of such a device as a laser light burst happening in reverse – getting swallowed up rather than beamed out, according to the researchers.

“So far, anti-lasers have only been realised in one-dimensional structures onto which laser light was directed from opposite sides,” says one of the team, Stefan Rotter from the Vienna University of Technology in Austria.

“Our approach is much more general: we were able to show that even arbitrarily complicated structures in two or three dimensions can perfectly absorb a suitably tailored wave. In this way, this novel concept can also be used for a much wider range of applications.”

It’s that versatility and flexibility that sets this new anti-laser apart from what previous such devices. The team worked up a set of calculations and computer simulations to theorise how such a perfectly absorbing anti-laser might work, then backed them up with physical lab tests.

Key to the process is finding a wave front for the incoming signals in order to perfectly absorb them. That then enables the absorption of waves that aren’t arriving in predictable ways, but rather as scattered signals bouncing in from multiple sources.

“Waves that are being scattered in a complex way are really all around us – think about a mobile phone signal that is reflected several times before it reaches your cell phone,” says Rotter.

“This multiple scattering is made practical use of in so-called random lasers. Such exotic lasers are based on a disordered medium with a random internal structure that can trap light and emit a very complicated, system-specific laser field when supplied with energy.” 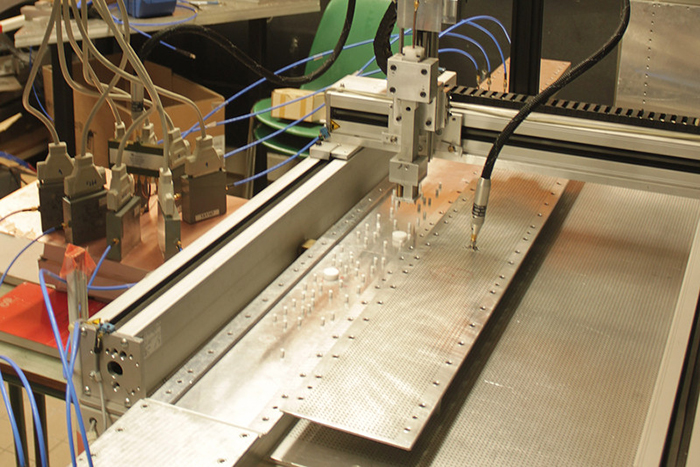 When it came to building their own anti-laser, the scientists set up a series of randomly placed Teflon cylinders, and sent microwave signals scattering through them – a little bit like rocks deflecting water waves in a puddle of water.

A waveguide placed on top with an antenna in its centre was used to absorb the incoming waves. The researchers managed to get an absorption rate of approximately 99.8 percent of the signals they broadcast.

That high mark is only in tightly controlled conditions, though – the team first measured the wave reflections as they came back in order to finely tune the central antenna to absorb them. Both the frequency of the signal and the absorption strength have to be carefully calibrated.

As a first attempt though, it’s very promising, and the theoretical physics behind the project suggests it can be adapted to a range of other signals and applications. It could work for any scenario “in which waves need to be perfectly focused, routed or absorbed”, write the researchers.

“Imagine, for example, that you could adjust a cell phone signal exactly the right way, so that it is perfectly absorbed by the antenna in your cell phone,” says Rotter.

“Also in medicine, we often deal with the task of delivering wave energy to a very specific point – such as shock waves shattering a kidney stone.”

Being treated with an anti-laser sounds pretty cool to us.

Bar Graphs Induce a Hidden Bias in Interpretation, Experiment Shows
A Mysterious Whirlpool Appeared Over Hawaii, And It Could Be Because of SpaceX
‘Polluted Realism’: How Monet’s Art Mirrors The Evolution of Smog
Scientist Accidentally Discovers The Oldest Brain of Any Vertebrate
Bigfoot Has a Very Simple Explanation, Scientist Says