Efforts to build a super-fast, super-secure quantum internet are steadily progressing, and scientists have now figured out how an important part of that network could function: an integral switch that manages how data passes between users.

The newly constructed switch addresses one of the key barriers to constructing a quantum internet: the way that information is distorted and lost as it travels. That information is transferred as photons shooting through fibre optic networks, but sometimes they get ‘lost’ along the way.

By adjusting how much data goes to each user through a system that selects and redirects the wavelengths of light carrying different data channels, the programmable switch can deal with increasing numbers of users without causing additional photon loss. 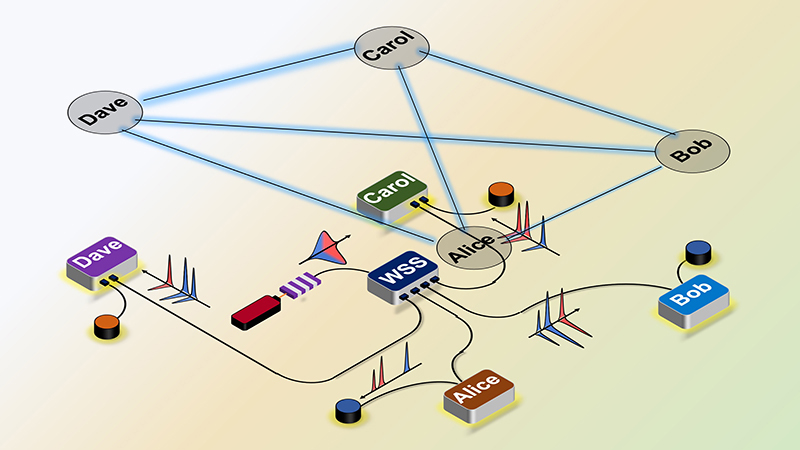 Above: A programmable switch could help increase the number of users in a quantum network without increasing photon loss.

“We show a way to do wavelength routing with just one piece of equipment – a wavelength-selective switch – to, in principle, build a network of 12 to 20 users, maybe even more,” says engineer Andrew Weiner from Purdue University, Indiana.

“Previous approaches have required physically interchanging dozens of fixed optical filters tuned to individual wavelengths, which made the ability to adjust connections between users not practically viable and photon loss more likely.”

The switch removes the need to add these filters every time someone new wants to log on to the quantum network because the switch takes care of the data directing – reducing operational and maintenance costs as well as improving efficiency.

Even better, the switch can adjust bandwidth according to a user’s particular needs – catering for the quantum equivalent of someone streaming 4K video and someone else just checking through their emails.

If we’re going to build and scale up quantum networks in the future, we need to figure out how to distribute entanglement, that core concept of quantum physics – particles that are inextricably linked to one another across a distance.

“When people talk about a quantum internet, it’s this idea of generating entanglement remotely between two different stations, such as between quantum computers,” says engineering graduate student Navin Lingaraju, also from Purdue University.

There’s still plenty of work left to do to get this switch ready for an actual quantum network – the researchers behind it are already investigating ways to get it working for more users at once – but like many advancements we’ve seen lately, studies like this are bringing us closer and closer to the end goal of quantum communication.

The fragile nature of quantum information means that any quantum network needs to be finely tuned and delicately balanced, and the new research could end up being an important part of achieving that.

One of the researchers’ techniques – dense wavelength division multiplexing or DWDM – is already used in the communications business to boost the bandwidth of optical fibre networks.

The thinking is that the more technologies a quantum internet can borrow from our existing networks, the easier it will be to implement further down the line.

“For the first time, we are trying to take something sort of inspired by these classical communications concepts using comparable equipment to point out the potential advantages it has for quantum networks,” says Weiner.

The research has been published in Optica.

Physicists Break Record Firing a Laser Down Their University Corridor
This Asteroid Has Survived For 4 Billion Years. That Could Be a Huge Problem
Earth’s Inner Core May Right Now Be in The Process of Changing Direction
These Binary Stars Are So Close Together That Their Year Is Only 20.5 Hours Long
The True Extent of Global Warming Has Been Hidden, Scientists Warn