Using some of the world’s most advanced microscope technology, scientists have captured images of molecules changing their charge state in real time. To do this, they added and removed electrons, directly observing changes to the structure of four molecules.

Although we’ve known for a long time that such changes occur, this marks the first time anyone has actually seen it happening. It could help us gain a new understanding of several molecular processes, including chemical reactions, catalysis and charge transport, and potentially even processes in living organisms.

“We have been able to resolve with unprecedented resolution the structural changes of individual molecules upon charging,” explained chemist Leo Gross of IBM Research-Zurich.

“This new understanding unlocks some of the mysteries of molecular charge-function relationships as it relates to how biology converts and transports energy.” 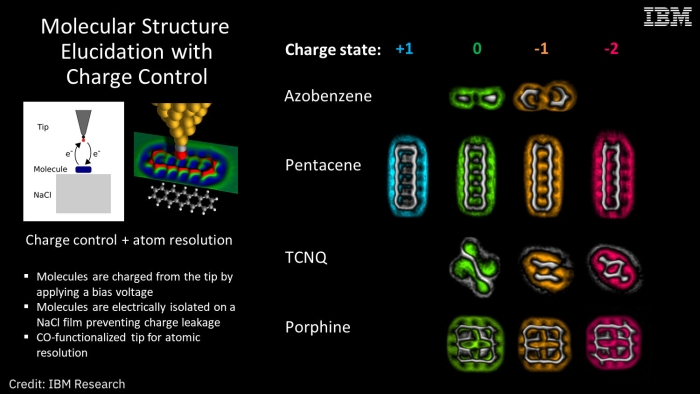 On the right, you can see the molecule shapes in false colour. (IBM)

The team used atomic force microscopy, which consists of a very sharp-tipped probe on the free end of a cantilever. The probe lowers towards the surface and deflects away, over and over.

As it does this, a laser detects the slight changes in the deflections of the cantilever as it moves over raised surface features. These are recorded to create an image of what the probe is scanning. In this way, scientists can image things that are too small to be seen via optical means.

So, four types of molecules – azobenzene, pentacene, tetracyanoquinodimethane (TCNQ) and porphine – were put under the microscope in a cold vacuum chamber to ensure no outside influences would affect the results.

A single molecule was placed on a film of sodium chloride, and then a small voltage was sent through the probe to transfer electrons to the molecule one at a time.

Gross and colleagues had already developed this technique for controlling the charge, and described it in a paper in 2015. And they described their imaging technique in 2009.

In this new work however, the team has found a way to combine the two techniques to image the molecules and control the charge at the same time.

In the video below, you can see with your own eyes how the porphine molecule morphs in shape as it loses electrons in these controlled conditions.

The azobenzene molecule physically twisted. With pentacene, areas of the molecule became more reactive due to the additional electrons. Changing the charge caused the type of bonds between the atoms of TCNQ to change, and it physically moved on the film. And in porphine, it wasn’t just the type of bonds, but also their length that changed.

Apart from just being really cool to look at, these findings could have a serious impact on our current understanding of molecular energy transfer.

Specifically, looking so closely at porphine molecules could help us to better understand some fundamental biological processes, since porphine is the parent compound of porphyrins, a group of organic compounds that make up both chlorophyll and haemoglobin.

“The charge transitions of these molecules are essential for life,” Gross said.

“With our new technique, we can increase understanding of how charge alters structure and function of molecules, which are vital in so many ways, such as to photoconversion and energy transport in living organisms.”

Millions of ‘Silent Synapses’ Could Be The Key to Lifelong Learning
Forests at Risk of Burning an Extra 30 Days a Year Without Climate Action
Giant Asteroid Unleashed a Devastating Martian Megatsunami, Evidence Suggests
Ancient Drains Under The Colosseum Reveal The Bones of an Unlikely Gladiator
Study Attempts to Unravel The Best Ratio of Land to Ocean For Exoplanet Habitability