Astronomers have been treated to a truly special look at some of the organic building blocks of the Universe, thanks to a newborn star that’s been spotted around 1,300 light-years away from Earth.

That star is V883 Ori - as it grows, the bursting heat is pushing back the star’s ‘snow line’ – that’s the area around the star where icy deposits are melted, revealing the organic materials locked inside.

Usually this snow line is too close to the star for us to see it properly, but around V883 Ori it’s hit a sweet spot our telescopes can actually peer into – specifically the Atacama Large Millimetre/submillimetre Array or ALMA.

Thanks to ALMA and the particular stage of growth that V883 Ori is at, scientists have been able to spot complex organic molecules including methanol, acetaldehyde, methyl formate, acetonitrile, and acetone. It’s actually the first confirmation of acetone in such a scenario. 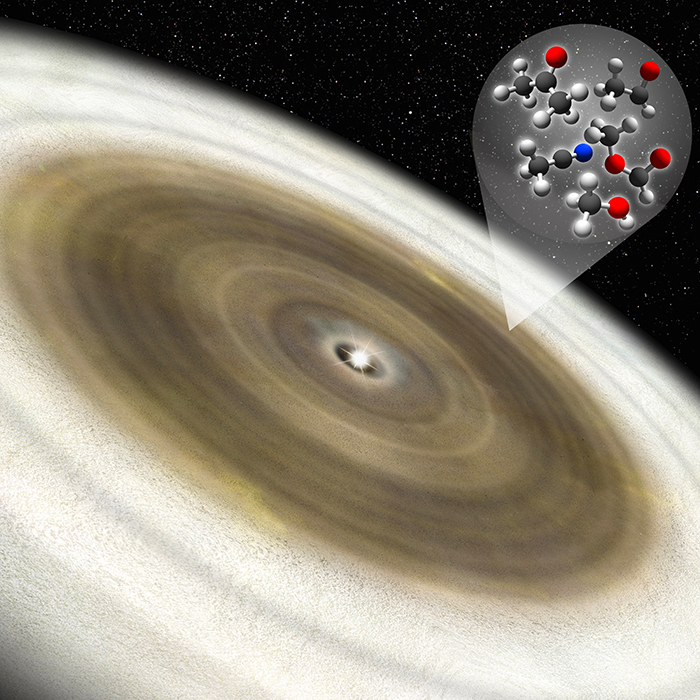 “Since rocky and icy planets are made from solid material, the chemical composition of solids in discs is of special importance,” says one of the team, Yuri Aikawa from the University of Tokyo in Japan.

“An outburst is a unique chance to investigate fresh sublimates, and thus the composition of solids.”

Astronomers have long been interested in such organic molecules, since we have similar ones travelling around our very own Solar System. Gleaning the early stages of these organic chemicals elsewhere can teach us more about their evolution closer to home, from the birth of the Sun to the rich life we see on Earth today.

There are plenty of these molecules around in space, particularly in comets, but they can be difficult to pin down and observe. V883 Ori gives us a special opportunity, pushing them around 10 times further out from a star than they would normally be.

The snow lines around these discs of debris circling newborn stars are usually covered in dust, obscuring what’s happening beyond even ALMA’s reach.

“It is difficult to image a disc on the scale of a few astronomical units (AU) with current telescopes,” says one of the researchers, Jeong-Eun Lee from Kyung Hee University in South Korea.

“However, around an outburst star, ice melts in a wider area of the disc and it is easier to see the distribution of molecules.”

The outburst is technically known as a FU Orionis (FUor) outburst, created by a greater-than-normal flow of material flowing from the outer disc to the star. These outbursts typically last around 100 years, so we’ve got some time yet to make as many observations as we can.

The data astronomers have gathered on V883 Ori shows that we can turn to FUors for an investigation of these particular types of organic molecules and the mark they leave on young planets forming in the star’s system.

The Philae probe was recently able to find some of these organic molecules on Comet 67P/C-G, all of which gives us more clues about how life first started on our planet.

“We are interested in the distribution of complex organic molecules as the building blocks of life,” says Lee.

This Asteroid Has Survived For 4 Billion Years. That Could Be a Huge Problem
These Binary Stars Are So Close Together That Their Year Is Only 20.5 Hours Long
Mysterious White Clouds Keep Popping Up Near The Bahamas, And No One Knows Why
‘Funky Worm’ Fossil Helps Explain The Mysterious Origins of Amphibians
Shooting Tiny, High Speed Bullets at a Spacecraft Could Speed Up Travel to The Stars