To us humans, a single Sun feels completely normal, but our Solar System is actually a weird outlier. Most stars in the Milky Way galaxy have at least one companion star. Now, in a system 1,800 light-years away, astronomers have finally confirmed a gas giant planet orbiting a star in a triple star system.

This system, called KOI-5, is located in the constellation of Cygnus, and the exoplanet therein has been confirmed more than a decade after it was first detected by the Kepler planet-hunting space telescope.

In fact, the planet – now known as KOI-5Ab – was the second candidate exoplanet detection made by Kepler when it commenced operations back in 2009. But it fell by the wayside.

“KOI-5Ab got abandoned because it was complicated, and we had thousands of candidates,” said astronomer David Ciardi of NASA’s Exoplanet Science Institute.

“There were easier pickings than KOI-5Ab, and we were learning something new from Kepler every day, so that KOI-5 was mostly forgotten.”

Following Kepler’s detection, Ciardi and other astronomers had used ground-based telescopes such as the Palomar Observatory, the WM Keck Observatory and the Gemini North telescope to study the system. By 2014, they had identified two companion stars, KOI-5B and KOI-5C.

This made it extremely difficult to figure out if the dip in starlight observed by Kepler was caused by an exoplanet or something else. The project was popped into the too-hard basket.

In 2018, Kepler’s successor TESS picked up the job. And when TESS looked at Cygnus, it, too, pinged a candidate exoplanet orbiting KOI-5A.

“I thought to myself, ‘I remember this target’,” Ciardi said. “But we still couldn’t determine definitively if the planet was real or if the blip in the data came from another star in the system – it could have been a fourth star.”

He and his team got to work, reanalysing all previous data. In an excellent testament to the abilities of our planet-hunting telescopes, the researchers found that yes, there is indeed an exoplanet in orbit around KOI-5A, at a skewed angle to at least one of the stars in the triple system.

“We don’t know of many planets that exist in triple-star systems, and this one is extra special because its orbit is skewed,” Ciardi said.

What the scientists were able to ascertain is that the planet, KOI-5Ab, is probably a gas giant about half the mass of Saturn and 7 times the size of Earth, on a very close five-day orbit around KOI-5A. KOI-5A and KOI-5B, both around the same mass as the Sun, form a relatively close binary, with an orbital period of about 30 years.

The third star, KOI-5C, orbits the binary at a much larger distance, with a period of about 400 years – a bit larger than Pluto’s 248-year orbit. 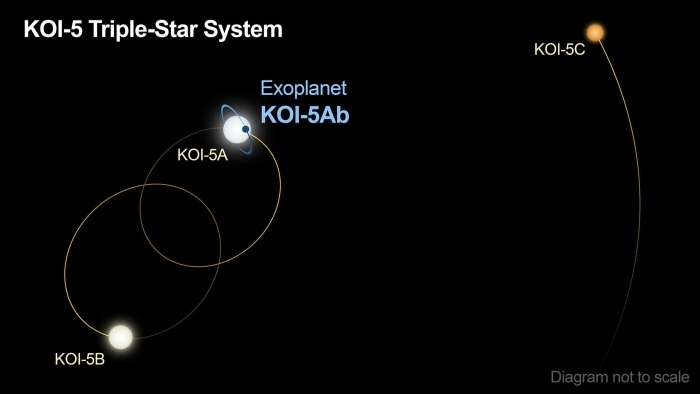 So, if you were able to stand on KOI-5Ab, KOI-5A would dominate the sky. KOI-5B would look a lot like the Sun would look from Saturn (Saturn’s on a 29-year solar orbit). And KOI-5C would look like a very bright star.

And the orbit of KOI-5Ab is misaligned with KOI-5B, which is interesting. If all objects had formed from the same swirling disc of material, they should be aligned more or less on the same plane, like the planets of the Solar System around the Sun’s equator. The researchers think that KOI-5B could have gravitationally perturbed the exoplanet’s orbit, kicking it out of alignment while the planet was forming.

We’ve seen other evidence that suggests this can happen. A triple star system was revealed last year with a majorly wonky protoplanetary disc. Any planets that form therein will likely end up on pretty weird orbits.

So, while we haven’t confirmed many exoplanets in triple star systems, finding more will help astronomers model these processes and figure out the wild dynamics involved.

“We still have a lot of questions about how and when planets can form in multiple-star systems and how their properties compare to planets in single-star systems,” Ciardi said.

“By studying this system in greater detail, perhaps we can gain insight into how the Universe makes planets.”

The discovery was announced at the 237th meeting of the American Astronomical Society.

A Lost Interview With The ‘Father of The Big Bang’ Was Just Discovered
An Incredible Thing Happens When Dolphins And Humans Team Up
Intriguing Meteorite From Mars Reveals ‘Huge Organic Diversity’, Scientists Say
AI System Detects Strange Signals of Unknown Origin in Radio Data
Are Your Cats Playing or Fighting? Researchers Think They Can Tell The Difference