After decades of research, an analysis of light has finally identified the age of an ancient star cluster in the Milky Way. It’s called HP 1, and it’s roughly 12.8 billion years old. That makes it one of the oldest ever found – not just in the galaxy, but in the entire Universe.

HP 1 hangs out in the galactic bulge, and we’ve known about it for a while. But getting an accurate reading of its light signature – its spectrum – has proven complicated, due to the way our atmosphere distorts incoming light.

Previous estimations of the cluster’s age, dating back to 1997, have been taken based on red giant stars, with conflicting results. Some have put it at around 13.8 billion years old. That’s the age of the Universe, so if it was also the cluster’s age, it would mean we’re wrong about some pretty fundamental milestones in the Universe’s evolution.

But the ever-improving field of adaptive optics, technology that removes atmospheric distortion in real-time, has now enabled the most high-resolution observations of the cluster yet, using the Gemini South telescope in Chile. These observations are finally revealing HP 1’s history.

“This star cluster is like an ancient fossil buried deep in our Galaxy’s bulge, and now we’ve been able to date it to a far-off time when the Universe was very young,” said astronomer Stefano Souza of the Universidade de São Paulo in Brazil.

“These are also some of the oldest stars we’ve seen anywhere.”

If you’re looking for old stars in the Universe, you need to seek out the titchy ones. Massive stars tend to live relatively short lives, but tiny stars much smaller than the Sun could potentially live for trillions of years (we think – it’s not like we’ll be around in a trillion years to find out). 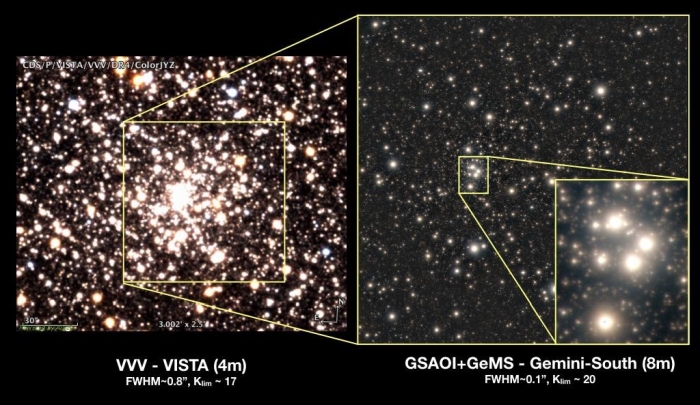 These showed that the cluster is about 21,500 light-years from Earth. And this distance measurement allowed the team to ascertain the absolute magnitude of the stars. This allows us to type the star accurately according to the Hertzsprung–Russell diagram, which in turn allows us more accurate calculations of other star qualities.

Such as metallicity, for instance, obtained by spectroscopic of a star, since different elements appear as different lines on the split spectrum.

This then allows a star’s age to be calculated. In the very early Universe, there were no metals. They were forged in the hearts of the first generations of stars, which spewed them forth into space upon their violent messy deaths.

The stars of HP 1 are so low in metal, the astronomy team thinks they must have formed before the Universe was one billion years old.

For a long time, it was thought that the oldest globular clusters could only be found at the outer reaches of the galaxy. In recent years however, of the roughly 160 such clusters known in the Milky Way, about a quarter have been located in the galactic bulge. That’s the densely packed heart of the galaxy, a region approximately 10,000 light-years across.

Since it’s thought that these clusters formed from the primordial dust and gas that later coalesced into the Milky Way, they can tell us a lot about the galaxy’s wild youth (well, chemical history, which some might argue is the same thing).

“These Gemini images are the best ground-based photometric data we have,” said astronomer Beatriz Barbuy of the Universidade de São Paulo.

“They are at the same level of HST data, allowing us to recover a missing piece in our puzzle: the age of HP 1. From the existence of such old objects, we can attest to the short star formation timescale in the galactic bulge, as well as its fast chemical enrichment.”

The paper has been published in the Monthly Notices of the Royal Astronomical Society.