We are, by now, pretty familiar with the concept of the Goldilocks zone. Also known as the habitable zone, it’s the distance from a star at which liquid water can be present on the surface on a planet – not so hot as to be vaporised, nor so cold as to be frozen.

These conditions matter because we count liquid water as a vital ingredient for life. But it’s not the only criterion that can help us to assess a planet’s potential habitability; according to new research based on decades of data, there are also Goldilocks stars.

Not all stars, you see, are built alike. Some are extremely hot and bright – such as the very young, blazing blue OB stars. Some are quite low in temperature, like red M-type dwarfs. These could perhaps be a good temperature, but the Goldilocks zone would be very close to the star, and red dwarfs tend to be turbulent, lashing their surrounding space with violent flares.

Our Sun sits between these two extremes, what is known as a yellow dwarf – a G-type main-sequence star. But, although we know life has emerged in the Solar System (we are, after all, living it), not even the Sun is a Goldilocks star.

Nope. According to astronomers at Villanova University, the best stars for life are one step along the Hertzsprung-Russell chart of star types – that is, K-type stars, which are orange stars a little cooler than the Sun, and a little warmer than a red dwarf.

“The K stars, especially the warmer ones, have the best of all worlds. If you are looking for planets with habitability, the abundance of K stars pump up your chances of finding life.”

Together with a colleague, astronomer Scott Engle of Villanova University, they presented their research at the 235th meeting of the American Astronomical Society back in January 2020.

Let’s be clear here: astronomers are not looking for habitable planets to find a back-up Earth. Even if we did find Earth 2.0, we just don’t have the technology to get us there.

Our quest for Goldilocks planets has more to do with finding out if there is other life out there in the Universe – and, one step further, if there is intelligent life. Is life normal, or is Earth a giant freak? Narrowing down where life is likely to spring up can help us in that search.

Guinan, Engle and others have been monitoring a number of stars F to G-type stars in ultraviolet and X-rays over the last 30 years as part of their Sun in Time program, and M-type red dwarfs for 10 years for the Living with a Red Dwarf program.

Both these programs have been helping to assess the impact of X-ray and ultraviolet radiation of the stars in question on the potential habitability of their planets.

Recently, they expanded their research to include similar data collection on K-type stars – what they have called Living with Goldilocks K-dwarfs. And, indeed, these stars do seem to be the most promising for life-supporting conditions. 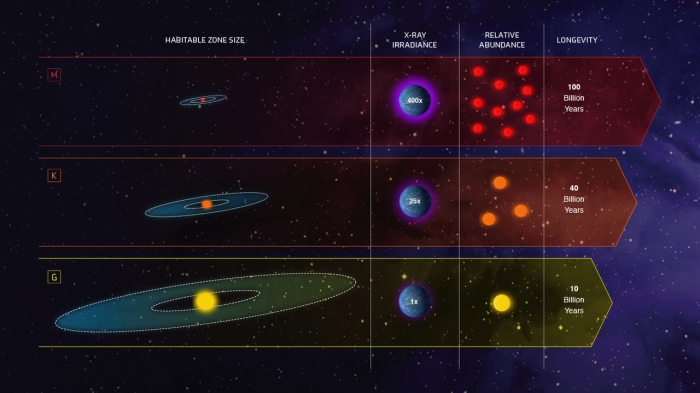 Although the habitable zone of K-type stars is smaller, they are much more common than G-type stars, with around 1,000 of them within just 100 light-years of the Solar System. And they have much longer main-sequence lifetimes.

The Sun is around 4.6 billion years old, with a main-sequence lifetime of around 10 billion years. Complex life only emerged on Earth around 500 million years ago, and scientists think that, in another billion years, the planet will become uninhabitable as the Sun begins to expand, pushing the Solar System’s habitable zone outwards.

Red dwarfs are more common, but they’re feisty, subjecting the space around them to intense radiation and flare activity that could strip any close planets of their atmospheres and liquid water.

By contrast, K-type stars have lifetimes between 25 and 80 billion years, offering a much bigger window in which life can emerge than G-type stars; according to the team’s data, they are much calmer than red dwarfs, too.

And there are already K-type stars around which planets have been located – namely Kepler-442, Tau Ceti and Epsilon Eridani.

“Kepler-442 is noteworthy in that this star (spectral classification, K5) hosts what is considered one of the best Goldilocks planets, Kepler-442b, a rocky planet that is a little more than twice Earth’s mass,” Guinan said.

The search for life could, of course, be much more complicated even than this – for example, if the planet has a highly elliptical orbit, it could produce temperature extremes that would render an otherwise Goldilocks planet uninhabitable.

The location of other planets in the system could make a difference too; and there’s a possibility that the entire galaxy has its own habitable zone (if it does, we know we’re in it, so looking nearby is a good start).

But this research could represent a piece of the puzzle that could make the life needle in the space haystack just a little bit easier to find.

The research was presented at the 235th meeting of the American Astronomical Society in Hawaii.

A version of this article was first published in January 2020.