It’s thought that somewhere out there, the Sun has a twin – born not just in the same stellar nursery, but an almost identical twin, a binary companion made of the same star-stuff. And astronomers think they might have just found it.

Located roughly 184 light-years away, it’s called HD 186302, and it’s almost certainly at least a long-lost sibling of our home star.

Most stars are born in groups that can number in the thousands, in what are known as stellar nurseries – tremendously vast clouds of gas and dust, pushed into clumps that gradually collapse under their own weight, forming the very first stages of stars. The Sun’s life is thought to have started this way, 4.57 billion years ago.

Our Sun is a solitary star, all on its ownsome, which makes it something of an oddball. But there’s evidence to suggest that it did have a binary twin, once upon a time. Recent research suggests that most, if not all, stars are born with a binary twin.

(We already knew the Solar System is a total weirdo. The placement of the planets appears out of whack compared to other systems, and it’s missing the most common planet in the galaxy, the super-Earth.)

So, if not for some cosmic event or quirk, Earth could have had two suns. But we don’t. So maybe that twin is somewhere out there.

To date, only a few candidates for solar siblings have been identified. But a team led by researchers from the Instituto de Astrofísica e Ciências do Espaço (IA) in Portugal went on the hunt equipped with better tools than previous searches, including a larger sample, chemical abundances of more elements, and more precise astrometric data, thanks to Gaia. 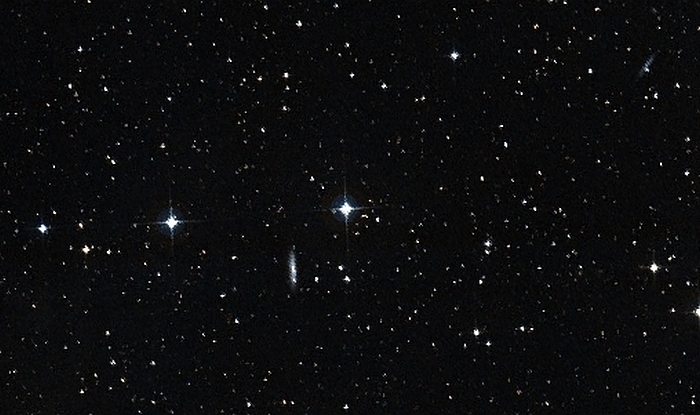 That’s it, right there in the middle! Isn’t it cool? (CDS Portal/Simbad)

And they found HD186302 – not just a stellar sibling, but a “special” one, they said. It’s uncannily similar to the Sun.

It’s a G-type main-sequence star just a teeny tiny smidge bigger than the Sun, and around about the same surface temperature and luminosity. It also has extremely similar chemical abundances, and is around the same age – about 4.5 billion years old.

We don’t actually know where the Sun was born, so every stellar sibling identified is another clue to unravelling our Solar System’s history.

“Since there isn’t much information about the Sun’s past, studying these stars can help us understand where in the Galaxy and under which conditions the Sun was formed,” said astronomer Vardan Adibekyan of IA.

And there’s more. The only place in the Universe where we know for a certainty life has formed, is the Solar System. That means the size, age, temperature, luminosity and chemical composition of the Sun are all compatible with life as we know it.

So it seems plausible that planets orbiting other stars with these same qualities – stellar siblings – could also have developed life.

A stellar twin, though, represents an even more hopeful option.

“Some theoretical calculations show that there is non-negligible probability that life spread from Earth to other planets or exoplanetary systems, during the period of the late heavy bombardment,” Adibekyan said.

“If we are lucky, and our sibling candidate has a planet, and the planet is a rocky type, in the habitable zone, and finally if this planet was ‘contaminated’ by the life seeds from Earth, then we have what one could dream – an Earth 2.0, orbiting a Sun 2.0.”

That’s a lot of ifs, to be sure… but, however slim the chance, all these things could plausibly have come to pass. IA astronomers are now making plans to look very hard for signs of any planets that may be orbiting HD186302.

The team’s research has been published in the journal Astronomy & Astrophysics.

‘Extraordinarily Close’ Asteroid About to Zoom Past Earth, NASA Says
An Expert Explains Why The Radioactive Water Stored at Fukushima Should Be Released
An Iceberg The Size of London Has Broken Free From Antarctica Ice Shelf
The Latest Milky Way Survey Shows Off an Incredible 3.32 Billion Celestial Objects
These Binary Stars Are So Close Together That Their Year Is Only 20.5 Hours Long