The asteroid 2018 LA crashed into Earth in the Kalahari Desert on 2 June 2018 – and now scientists have been able to trace it back 22 million years to the place where it originated from.

This is the first time a meteorite’s entire voyage to Earth has been charted in this way, and it’s only the second time that we’ve ever had the opportunity to observe an asteroid in space before it enters the atmosphere and becomes a meteor.

Based on those early observations, analysis of the recovered meteorite fragments, and various other factors, a new study pinpoints the origin of 2018 LA as Vesta – the Solar System’s second largest asteroid and the only one that can sometimes be seen from Earth with the naked eye.

“Analysis of the meteorite indicates it was deeply buried under the surface of Vesta prior to being ejected all those years ago,” says astronomer Hadrien Devillepoix, from Curtin University in Perth.

“This achievement is complementary to sample-return probes like Hayabusa2. This research allows us to progressively map out the composition of the asteroid belt, and we can get a better idea of the type of material Earth-threatening asteroids are made of.”

Key to the analysis was the images of 2018 LA in space that were picked up by the ANU SkyMapper telescope in Australia. These pictures were added together with data from other telescopes, and local CCTV footage that showed the last few moments before impact in Botswana, to figure out where the meteorite had come from.

The fragments discovered in the field offered more clues: techniques including spectroscopy and microtomography were used to determine that the rocks matched up with those from the 2015 Sariçiçek meteorite, which also came from Vesta.

“Billions of years ago, two giant impacts on Vesta created a family of larger, more dangerous asteroids. The newly recovered meteorites gave us a clue on when those impacts might have happened,” explains one of the team, SETI Institute astronomer Peter Jenniskens.

Both the 2015 and 2018 objects are Howardite Eucrite Diogenite (HED) meteorites, so called because of their chemical and mineral compositions.

Plotting these meteorites back to their origins in space, through the use of chemical analysis and computer modeling, tells us more about those origins too – the Veneneia basin on Vesta where these asteroids first detached. 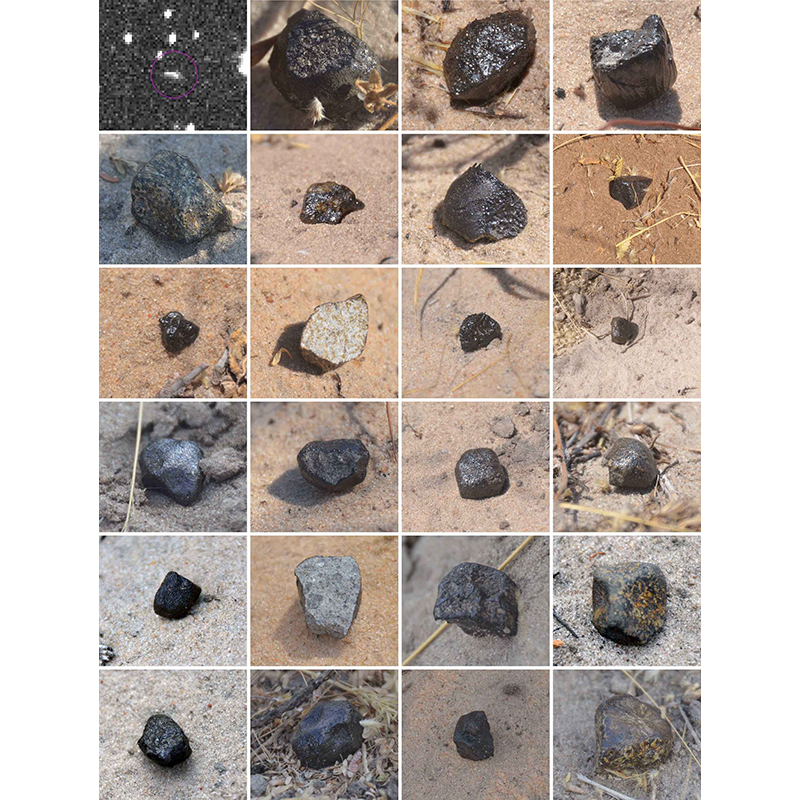 “The oldest known materials found in both Vesta and in the meteorite are zircon grains that date back to more than 4.5 billion years ago, during the early phase of the Solar System,” says astronomer Christopher Onken, from the Australian National University (ANU).

The meteor would have broken up around 27 kilometers (16.8 miles) above ground, the researchers established, creating a glow 20,000 times brighter than the full Moon as it entered Earth’s atmosphere.

A total of 23 meteorite fragments were ultimately recovered as researchers triangulated the location of the fall, and spent days scouring the ground at the Central Kalahari Game Reserve, kept safe from leopards and lions by national parks staff.

“The meteorite is named ‘Motopi Pan’ after a local watering hole,” said geoscientist Mohutsiwa Gabadirwe of the Botswana Geoscience Institute. “This meteorite is a national treasure of Botswana.”

The research is due to be published in Meteoritics and Planetary Science.

‘Funky Worm’ Fossil Helps Explain The Mysterious Origins of Amphibians
There’s a ‘Lost City’ Deep in The Ocean, And It’s Unlike Anything We’ve Ever Seen
Scientists Create Shapeshifting Humanoid Robot That Can Liquefy And Reform
This Asteroid Has Survived For 4 Billion Years. That Could Be a Huge Problem
‘Extraordinarily Close’ Asteroid About to Zoom Past Earth, NASA Says