In a stormy Hawaiian sky in July 2017, streaks of red and blue lightning seemed to meet above a bed of white light.

Cameras on the Gemini North telescope at the Gemini Observatory in Mauna Kea snapped a stunning picture of the multi-colored light show. The National Optical-Infrared Astronomy Research Laboratory (NOIRLab) released the photo on Wednesday as its “image of the week”.

The lightning in the image “appears so otherworldly that it looks like it must be a special effect,” NOIRLab said. It also published a zoomable version.

These colorful lightning phenomena are aptly known as red sprites and blue jets. They’re extremely tricky to capture on camera: The flashes last just tenths of a second and can be hard to see from the ground, since they’re generally obscured by thunderstorm clouds.

According to Peter Michaud, the education and engagement manager for the NOIRLab, astronomers in nearby Hilo use the telescope’s cameras to remotely keep track of bad weather brewing near the observatory. The camera system takes a photo of the sky every 30 seconds.

“We’ve seen a few other instances of similar phenomena, but that was by the best example of a lightning sprite in the upper atmosphere,” he told Insider.

Regular white lightning is different from sprites and jets in several key ways. Whereas regular lightning shoots between electrically charged air, clouds, and the ground during storms, sprites and jets start in different places in the sky, and move toward space. Their distinctive hues also set them apart.

Red sprites are ultrafast bursts of electricity that crackle through the upper regions of the atmosphere – between 37 and 80 km (23 and 49 miles) up in the sky – and move spaceward. Some sprites are jellyfish-shaped, while others, like the one in the Gemini Observatory image, are vertical columns of red light with tendrils snaking down. These are called carrot sprites.

Stephen Hummel, a dark-skies specialist at the McDonald Observatory, captured a spectacular image of a jellyfish sprites from a ridge on Mount Locke in Texas last July (below). 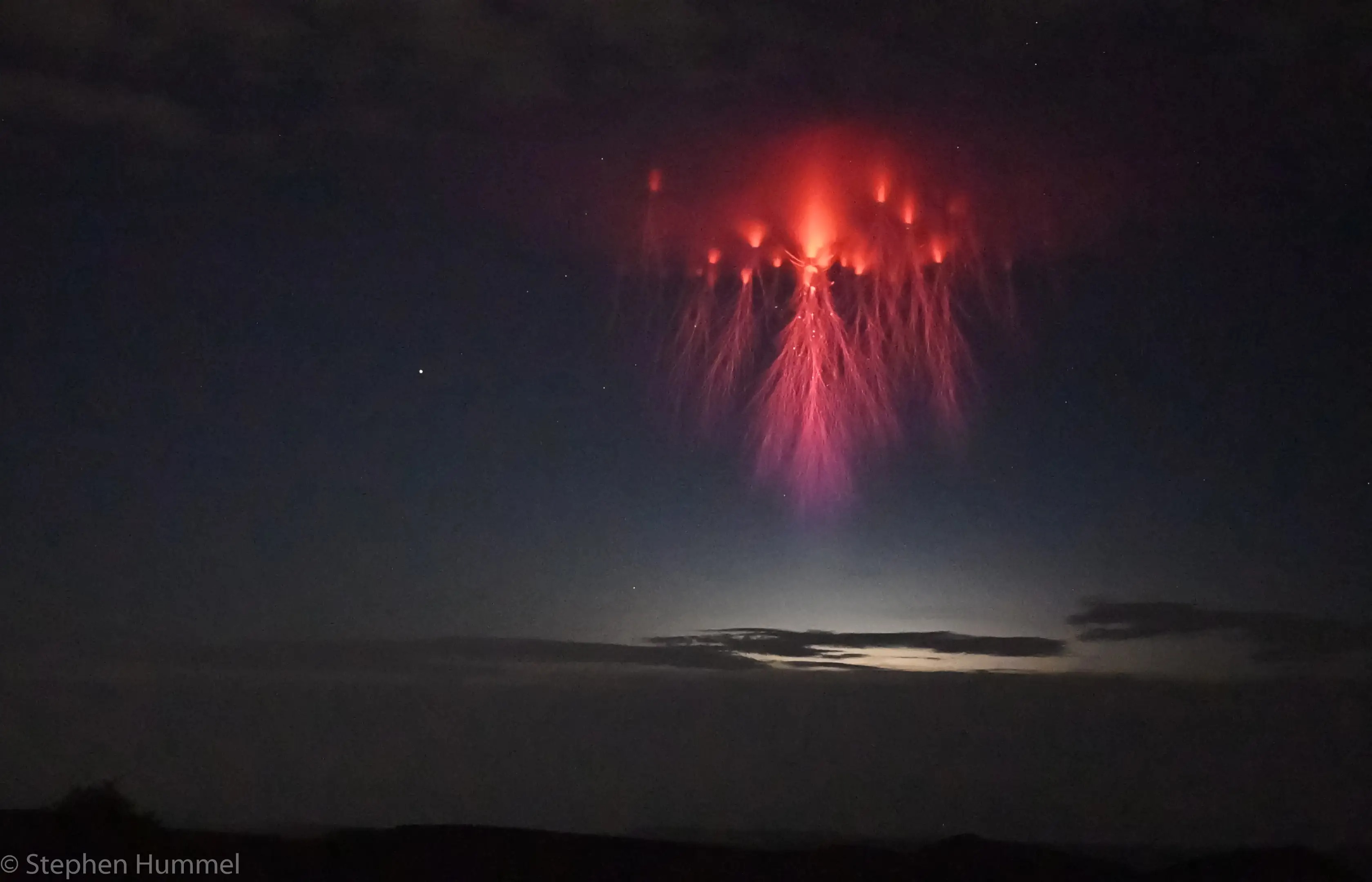 “Sprites usually appear to the eye as very brief, dim, grey structures. You need to be looking for them to spot them, and oftentimes I am not certain I actually saw one until I check the camera footage to confirm,” Hummel told Insider at the time.

Davis Sentman, who worked as a professor of physics at the University of Alaska Fairbanks, proposed the name “sprite” for the red lightning phenomenon. He said the term was “well suited to describe their appearance,” since the word evokes the lightning’s fairy-like, fleeting nature. Sentman died in 2011.

Blue jets, meanwhile, are born closer to Earth than red sprites. These cone-shaped electrical discharges are also brighter than sprites, and they blast upward from the tops of clouds.

Thundercloud peaks can sit anywhere from one to 14 miles (22 km) above Earth’s surface; blue jets keep moving skyward until they reach a height of roughly 48 km, at which point they vanish. These jets move at speeds of more than 22,300 mph (9.9 km/s). 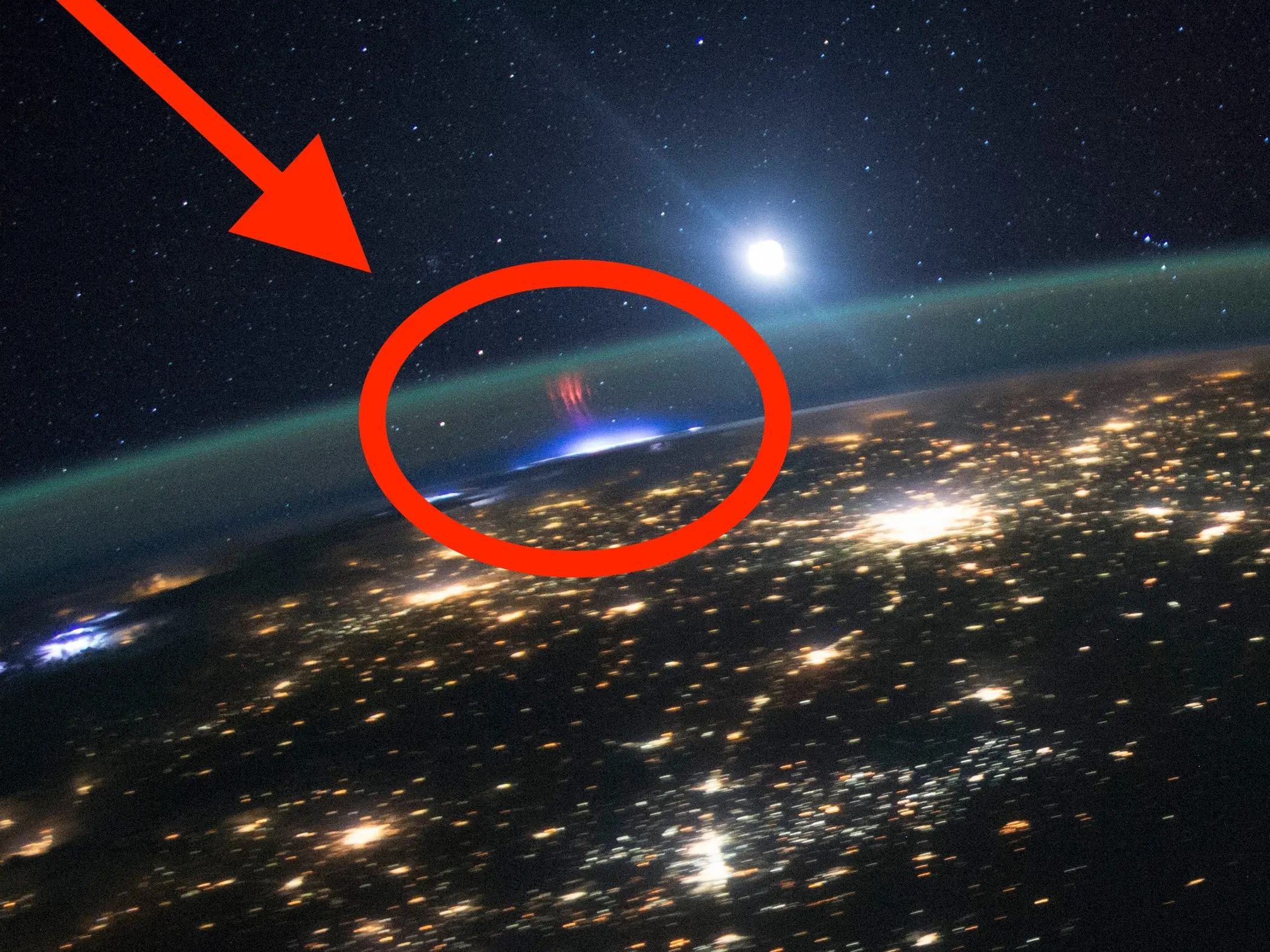 Sprites and jets can be seen from space

When regular lightning strikes the ground, it tends to release positive electrical energy that needs to be balanced out by equal and oppositely charged energy elsewhere in the sky. So sprites and jets are the electrical discharges that balance the equation – that’s why these colorful lightning phenomena occur.

“The more powerful the storm and the more lightning it produces, the more likely it is to produce a sprite,” Hummel said.

Astronauts can sometimes spot sprites and jets from the International Space Station, 402 km (249 miles) above Earth.

European Space Agency astronaut Andreas Morgensen captured elusive blue jets on video for the first time in color in 2015. He spotted the jets while filming a storm over India’s Bay of Bengal. Scientists later used the footage as part of a 2017 study.

Morgensen’s observations “are the most spectacular of their kind,” the study authors wrote.

Newly Discovered Fossil Reveals Hundreds of Teeth ‘Never Seen Before in a Pterosaur’
Astronomers Just Discovered a ‘Bear’ on Mars
Mysterious White Clouds Keep Popping Up Near The Bahamas, And No One Knows Why
Ripples in Space-Time Could Actually Reveal When Time Began
Lightning Strikes Create a Strange Form of Crystal Rarely Seen in Nature