For Elon Musk and SpaceX, the company he founded to reignite space exploration, a great deal hinges on the creation of the Starship.

This super-heavy launch vehicle, which was has evolved considerably in the past few years, will eventually replace the Falcon 9 and Falcon Heavy as the mainstay of the SpaceX fleet. Once operational, it will also facilitate missions to the Moon and eventually Mars.

Once again, Elon Musk has used his social media platform of choice to share the latest details about the Starship’s progress.

As he shared in a series of tweets, which began on Thursday, January 31, the company has commenced test-firing the Raptor engine at their Rocket Development and Test Facility in McGregor, Texas, and is pushing towards the Starship’s first mission.

The Raptor is a staged-combustion reusable rocket engine powered by cryogenic liquid methane and liquid oxygen (LOX), rather than the kerosene and LOX combination (RP1) which powers the Merlin rockets used by the Falcon rocket family.

Once complete, the Starship will have seven Raptor engines, each of which will provide twice as much thrust as the Merlin 1D used by the Falcon 9.

News of the engine’s test-firing began with Musk posting two pictures of the Raptor engine along with the caption, “Preparing to fire the Starship Raptor engine.”

In addition to the pictures, Musk took the opportunity to share specifications that provided some clues as to what path the company is planning to take with the Starship in the near future.

For example, Musk indicated that the current version of the engine is simplified compared to later versions, and is tailor-made for speed:

Here, Musk is alluding to the first crewed mission of the Starship, which is scheduled to take place in 2023.

According to the plan that Musk announced back in September, this inaugural flight will see Japanese fashion designer and art curator Yusaku Maezawa and a group of artists being taken on a flight around the Moon.

This mission, the #dearmoon project, will be the first private lunar passenger flight in history and is intended to help fund the development of the Starship. The flight will last a full week and will involve the passengers using the journey to inspire their particular brand of artwork.

By streamlining the development of the engine, Musk is indicating that he may be accelerating the timeline.

This update was followed on February 2nd with Musk tweeting a photo of himself standing by the engine and announcing that it had made it to the McGregor facility.

On the following day, Musk posted two more tweets (shown above) of the Raptor engine being test-fired. The two video segments show the engine igniting and achieving about three seconds of clean thrust before being shut off.

As you can see from the videos, the test was a dazzling display of both light and sound. Aside from the beautiful, multi-colored stream of fire that the engine produces, there is also the ear-shattering noise it makes (which sounds like a cannon firing repeatedly).

Elon followed the video clips with a still shot of the engine firing with the caption, “First firing of Starship Raptor flight engine! So proud of great work by @SpaceX team!”

Other recent changes that were shared by Musk in recent weeks include the fact that the first stage of the launch system (the Super Heavy) could initially fly with less than 31 Raptor engines (as was originally proposed). The reasoning behind this, according to Musk, is for the company to cut their losses “in case it blows up“. 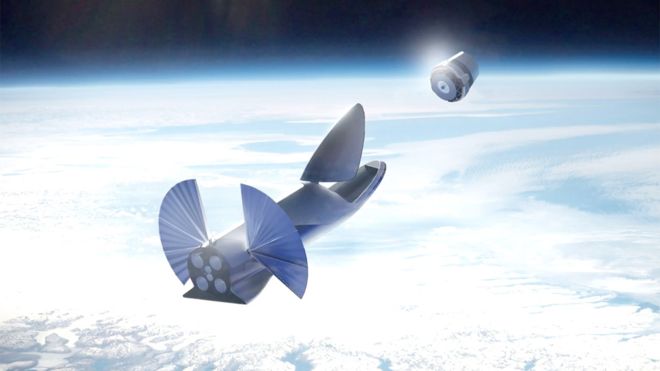 In addition to that, Musk also indicated that the Starship’s Reaction Control System (RCS) thrusters will have a simplified design. When asked if he was still planning on using methalox fuel to power them, he tweeted:

All of this suggests that Musk is looking to cut costs and push ahead on production.

Musk attributed the latter to the steady growth of the company’s workforce, which has led to the unwanted duplication of some positions.

In the case of SpaceX, however, Musk claimed that the layoffs were caused by the company’s “absolutely insane” projects, specifically Starlink (the SpaceX initiative for providing high-speed global internet access via satellite) and the Starship.

As such, it makes sense that some trimming and expediting is seen as necessary as far as the development of the Starship is concerned. These latest updates also come shortly after Musk revealed that the ship’s hull design had changed.

This was apparent when the miniature version – the “Starship Alpha” – was photographed being assembled over the holidays.

Thanks to multiple shutterbugs who kept an eye on the South Texas Launch Site, it became apparent that the Starship – like it’s prototype – would be constructed out of stainless steel rather than carbon composites (as had originally been proposed).

Musk confirmed this shortly thereafter, and reiterated it once again on 31 January, tweeting:

“To be clear, I’m confident that a stainless steel ship will be lighter than advanced aluminum or carbon fiber, because of strength to weight vs temperature & reduced need for heat shielding.”

As always, Musk is keeping the public engaged on the progress of his “insane projects”. And while there might be some bumps along the way, Musk is nothing if not tenaciously-driven.

He’s also no stranger to financial hiccups and setbacks, but has always managed to deliver in the end. And where the Starship is concerned, he’s hardly alone in wanting to see it succeed.

Scientists Have a Plan to Turn Earth Into a Giant Observatory
Scientists Create Shapeshifting Humanoid Robot That Can Liquefy And Reform
Bacteria Can Use Plastic Waste as a Food Source, Which Isn’t as Good as It Sounds
Physicists Break Record Firing a Laser Down Their University Corridor
Mysterious White Clouds Keep Popping Up Near The Bahamas, And No One Knows Why