SpaceX is about to perform its most ambitious test-launch yet of a shiny Mars rocket prototype in south Texas.

Workers have descended upon the developing coastal launch site over the past 8 months to build and prepare the stout, three-legged prototype for testing. It’s built out of stainless steel, has the shape of a badminton shuttlecock, and is equipped with one of SpaceX’s next-generation Raptor rocket engines.

Elon Musk, the rocket company’s founder, named the roughly six-story-tall rocket ship “Starhopper” because it’s not built to fly into space but rather to “hop” to altitudes no higher than about 3 miles (4.8 km). 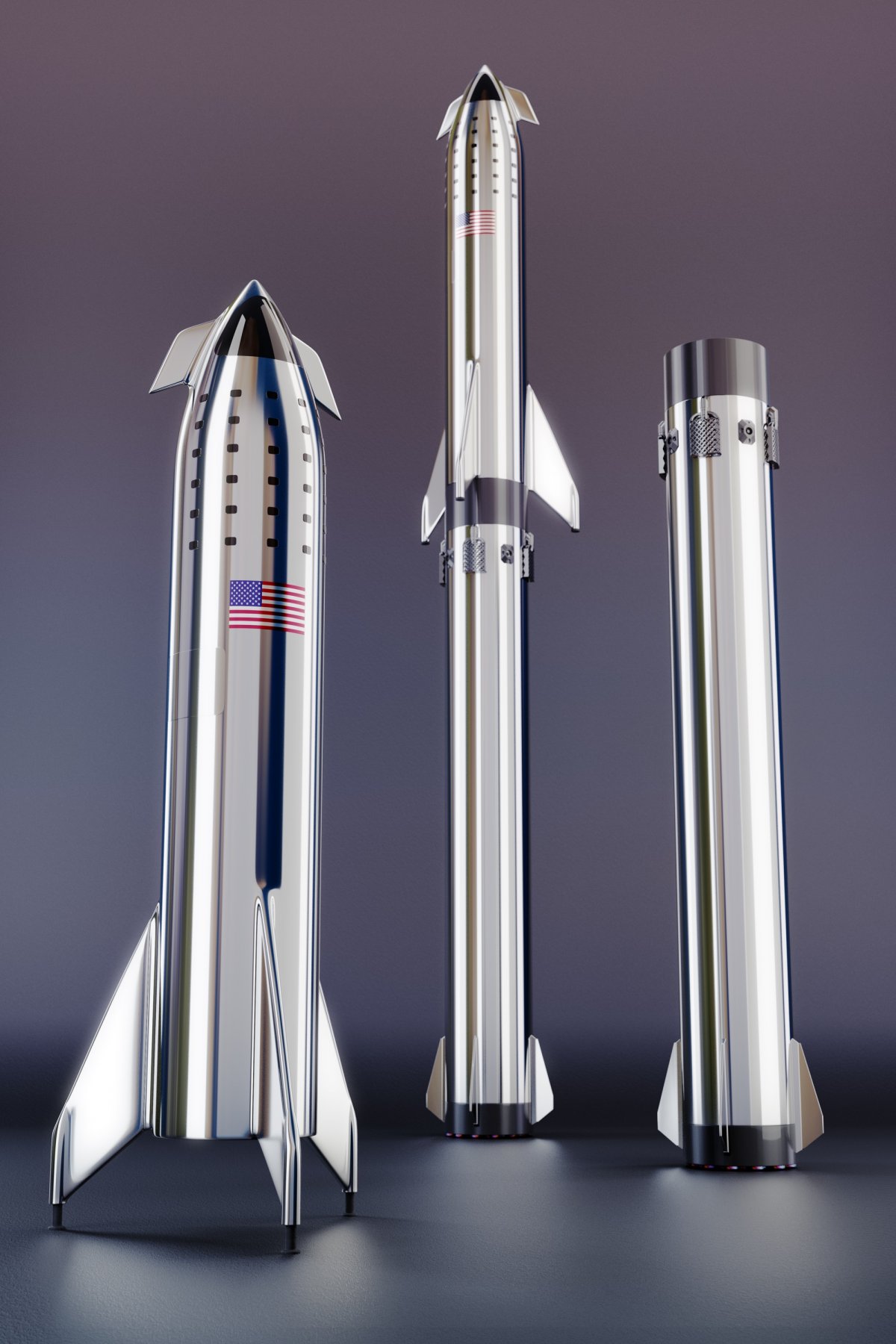 Starhopper is a prototype for a much more powerful and roughly 400-foot-tall (122-meter-tall) launch system known as Starship: a vehicle that Musk and his company envisions taking dozens of people to the Moon or Mars, deploying hundreds of satellites at a time, or rocketing people around Earth in a matter of minutes.

SpaceX fired up Starhopper for the first time on April. That test secured the rocket ship with giant, bike-chain-like tethers on its legs, and the vehicle lifted the ship no more than a few inches off the ground. Subsequent tests lifted it up farther, but not by much.

Next week’s test will launch it completely untethered.

Engineers hope to take the vehicle up to about 65 feet (20 meters) – about one full Starhopper height. Musk also says Starhopper will move sideways, and then try to land back on its launchpad.

A SpaceX spokesperson told Business Insider in an email that the hop-and-hover test is “one in a series of tests designed to push the limits of the vehicle as quickly as possible to learn all we can, as fast as we safely can.”

When a Twitter user asked Musk if there would be live-streaming video of the launch attempt, Musk said “Sure.”

A launch at that moment is anything but guaranteed, though.

“As with all development programs, the schedule can be quite dynamic and subject to change,” the spokesperson said.

What to expect with SpaceX’s first ‘hover’ test for Starhopper

Before attempting a full hop-and-hover launch, SpaceX needs to put the Starhopper and its new engine through a series of tests.

The company will likely flow liquid oxygen through the new Raptor engine over the weekend to check its plumbing and hardware. If this initial test succeeds, the company may attempt what’s called a static fire test on Monday.

The static fire test would add methane to the flowing oxygen, ignite both fuels, and burn the Raptor engine for a matter of seconds to show it’s functioning normally. (Methane makes up most natural gas on Earth, and it’s a fuel Musk hopes to manufacture on Mars with a planned space colony.)

The static fire test may resemble SpaceX’s brief launch of Starhopper on April 6, which briefly lifted it off the ground:

If there are any delays leading up to those and other critical pre-launch tests, SpaceX will almost certainly delay its planned Starhopper hover. And if engineers discover any problems during the tests, SpaceX may scrub its current plans, make necessary fixes, and try again at a later date.

Musk had hoped to pull off Starhopper’s hop-and-hover launch attempt several weeks ago, but he said a previous Raptor engine had a mechanical failure and vibration issues. The newest Raptor engine, called “serial number 6” or SN6, has apparently resolved those snags.

“Hopper almost ready to hover,” Musk tweeted on July 7, showing a photo of a new Raptor engine test-fire at the company’s rocket-testing plant in central Texas.

The village inside SpaceX’s Mars spaceport 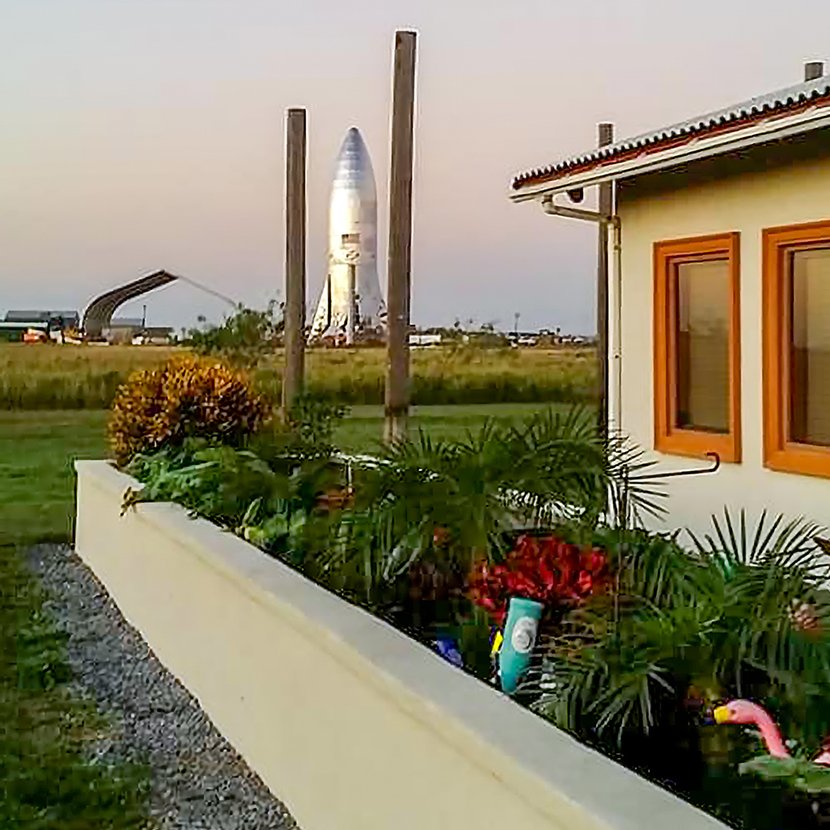 SpaceX’s launch site for the Starhopper is located near Boca Chica Beach in south Texas. State and Cameron County politicians, as well as the Federal Aviation Administration (FAA), gave the company final approval to develop the area in 2014.

However, Boca Chica Village – a hamlet where about 20 people live – now finds itself in the middle of SpaceX’s expanding industrial site and future spaceport.

The easternmost edge of the village is located about 1.5 miles from SpaceX’s beachside launch pad. Initial plans called for launching Falcon 9 and Falcon Heavy rockets (about one a month), but Musk said in early 2018 that SpaceX had abandoned those plans.

Starhopper began to appear in late 2018, and Musk confirmed its existence with a series of photos. The prototype initially had a nosecone, but powerful Texas winds blew it off and damaged it. That’s why the vehicle looks stubby and unfinished today.

Local authorities block the only road out to the launch site, called Highway 4, during tests to keep a 1.5-mile safety perimeter.

Starhopper is just the beginning of Starship’s development program.

The company is now building a V-shaped wind block in its operations yard, say sources familiar with the matter, where it’s also constructing a “Mark 1” (Mk1) Starship prototype. Musk says that vehicle is designed to reach orbit and – as part of what he described as a friendly competition – workers are also building a near-identical Starship prototype near Cape Canaveral, Florida, where the company operates two other launch pads.

SpaceX’s current government licence, which the Federal Communications Commission granted in February 2019, only permits the company to launch experimental vehicles to an altitude of 3.1 miles (5 kilometers) for flights lasting up to six minutes.

Musk tweeted in March that SpaceX is “working on regulatory approval” for orbital flights of Starship prototypes from both Texas and Florida.

The company plans to launch the prototypes into orbit around Earth before the end of 2020. Then, in 2023, Musk hopes to use a full-scale Starship to launch a Japanese billionaire and his hand-picked crew of artists on a voyage around the moon.

SpaceX president and COO Gwynne Shotwell reportedly said that the company hopes to send its first uncrewed payloads to Mars by 2024. Following that, perhaps in 2026, SpaceX may try to put boots on the red planet.

“It could very well be that the first person that departs for another planet could depart from this location,” Musk said during the Boca Chica launch site’s groundbreaking in September 2014.

3 Major Aquatic Animal Groups Can Trace Their Lineage to This Ancient Armored ‘Worm’
NASA Is Sending a Rotorcraft to Titan in 2027. Here’s Where It Will Land.
Narwhals Are So Weird, Scientists Used Chaos Theory to Explain Their Behavior
We May Finally Know Why Oceans in The Southern Hemisphere Are Getting So Warm
‘Dark Data’ Is Leaving a Huge Carbon Footprint, And We Have to Do Something About It