Precipitation is much more widespread throughout the Solar System than commonly assumed. Obviously it rains water on Earth. But it snows carbon dioxide on Mars, rains methane on Titan, sulfuric acid on Venus, and could potentially rain diamonds on Neptune.

The type of material falling out of the sky is almost as varied as the planets themselves. New research from a team led by Kaitlyn Loftus at Harvard found a similarity for all of the liquid materials that constitute rain throughout the Solar System – all of the drops, no matter the material, are roughly the same size.

There are two main causes for this: small raindrops evaporate while large raindrops separate into smaller ones. To determine what those levels might be, the scientists looked at what size droplets could be on planets similar to Earth, such as Mars or Venus.

The outcome of those models showed, as might be expected, drops with a radius less than 1/10 of a millimeter evaporated before hitting the ground.

Larger drops with a radius of more than a few millimeters on the other hand would split into drops closer to the average size. 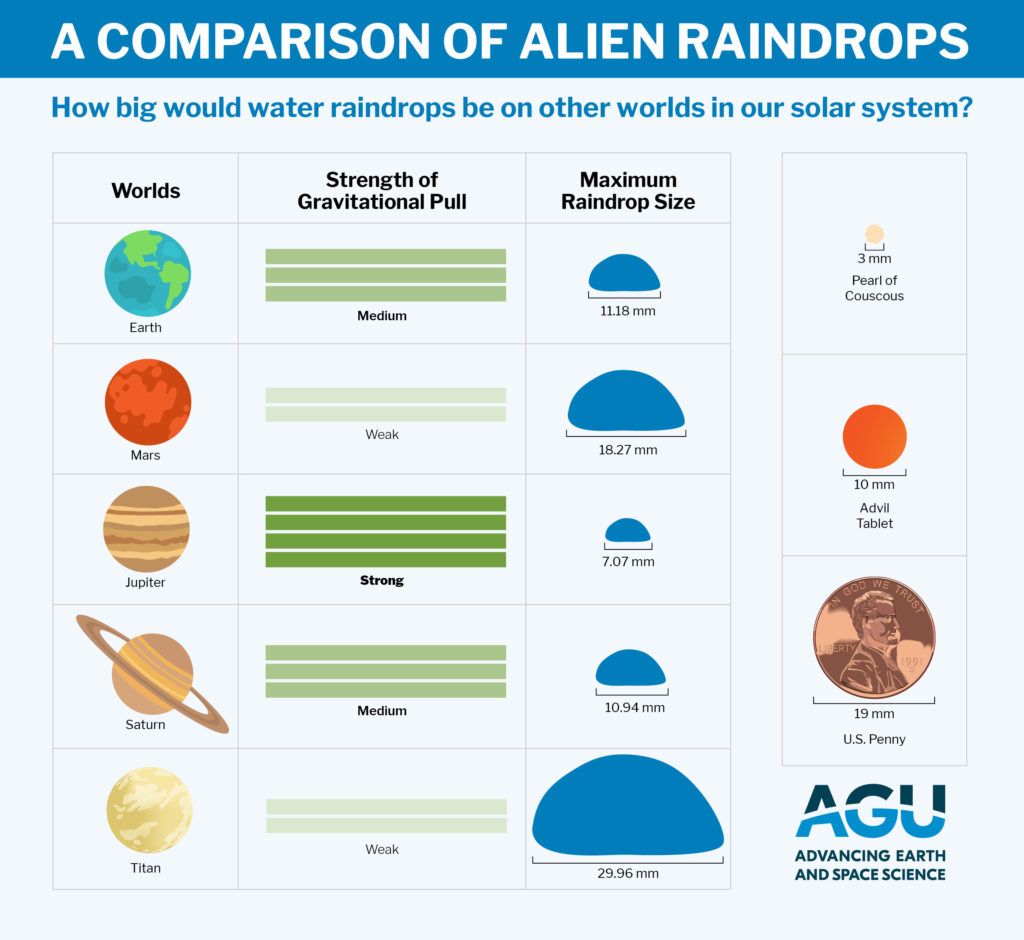 Even on bigger planets, there was not a dramatic difference in size. Rain on Jupiter or Saturn would be similar in size and shape to that on Earth or Mars. Similarly, the material that a raindrop is made up of did not have a particularly large impact on drop size.

For example, on Titan it rains methane. The study found that the largest of these methane drops would only be about twice the size of the average drop on Earth, despite Titan’s dramatically different gravity and weather patterns.

It is not clear yet why exactly this uniformity exists, though the team thinks it has to do with the density and surface tension of the material. Understanding that relationship is not the only beneficial outcome of further study in this area.

Understanding how raindrops form on other planets could help exoplanetologists understand the atmospheres of exoplanets, which is going to become a much more prescient topic with the launch of much more powerful exoplanet observing satellites in the near future.

Though it might be a long time until anyone actually witnesses rain on another world in person, knowing that it wouldn’t be too dissimilar from Earth’s own rain is a comforting thought.

And when a person actually does directly witness it, it will be all the more amazing.

A Planet Almost Exactly Earth’s Size Has Been Found 72 Light-Years Away
This Small Australian Marsupial Is Quite Literally Dying For Sex
Super-Rare Star System Is a Giant Cosmic Accident Waiting to Happen
Even While Dormant, Volcanoes Leak Climate-Changing Gasses Into The Atmosphere
US Shoots Down Chinese Surveillance Balloon: What Can They Actually See?