For decades, we’ve dreamed of visiting other star systems. There’s just one problem – they’re so far away, with conventional spaceflight it would take tens of thousands of years to reach even the closest one.

Physicists are not the kind of people who give up easily, though. Give them an impossible dream, and they’ll give you an incredible, hypothetical way of making it a reality. Maybe.

In a new study by physicist Erik Lentz from Göttingen University in Germany, we may have a viable solution to the dilemma, and it’s one that could turn out to be more feasible than other would-be warp drives.

This is an area that attracts plenty of bright ideas, each offering a different approach to solving the puzzle of faster-than-light travel: achieving a means of sending something across space at superluminal speeds.

There are some problems with this notion, however. Within conventional physics, in accordance with Albert Einstein’s theories of relativity, there’s no real way to reach or exceed the speed of light, which is something we’d need for any journey measured in light-years.

That hasn’t stopped physicists from trying to break this universal speed limit, though.

While pushing matter past the speed of light will always be a big no-no, spacetime itself has no such rule. In fact, the far reaches of the Universe are already stretching away faster than its light could ever hope to match.

To bend a small bubble of space in a similar fashion for transport purposes, we’d need to solve relativity’s equations to create a density of energy that’s lower than the emptiness of space. While this kind of negative energy happens on a quantum scale, piling up enough in the form of ‘negative mass’ is still a realm for exotic physics.

In addition to facilitating other kinds of abstract possibilities, such as wormholes and time travel, negative energy could help power what’s known as the Alcubierre warp drive.

This speculative concept would make use of negative energy principles to warp space around a hypothetical spacecraft, enabling it to effectively travel faster than light without challenging traditional physical laws, except for the reasons explained above, we can’t hope to provide such a fantastical fuel source to begin with.

But what if it were possible to somehow achieve faster-than-light travel that keeps faith with Einstein’s relativity without requiring any kinds of exotic physics that physicists have never seen? 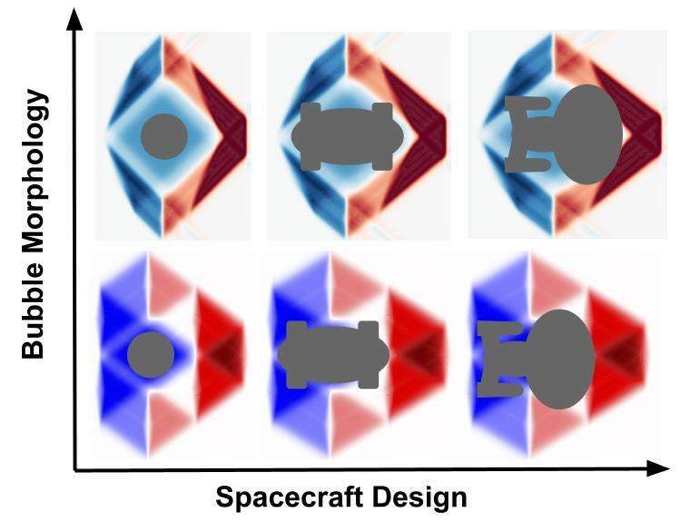 In the new work, Lentz proposes one such way we might be able to do this, thanks to what he calls a new class of hyper-fast solitons – a kind of wave that maintains its shape and energy while moving at a constant velocity (and in this case, a velocity faster than light).

According to Lentz’s theoretical calculations, these hyper-fast soliton solutions can exist within general relativity, and are sourced purely from positive energy densities, meaning there’s no need to consider exotic negative-energy-density sources that haven’t yet been verified.

With sufficient energy, configurations of these solitons could function as ‘warp bubbles’, capable of superluminal motion, and theoretically enabling an object to pass through space-time while shielded from extreme tidal forces.

It’s an impressive feat of theoretical gymnastics, although the amount of energy needed means this warp drive is only a hypothetical possibility for now.

“The energy required for this drive traveling at light speed encompassing a spacecraft of 100 meters in radius is on the order of hundreds of times of the mass of the planet Jupiter,” Lentz says.

“The energy savings would need to be drastic, of approximately 30 orders of magnitude to be in range of modern nuclear fission reactors.”

While Lentz’s study claims to be the first known solution of its kind, his paper has arrived at almost exactly the same time as another recent analysis, published only this month, which also proposes an alternative model for a physically possible warp drive that doesn’t require negative energy to function.

Both teams are now in contact, Lentz says, and the researcher intends to share his data further so other scientists can explore his figures. In addition, Lentz will be explaining his research in a week’s time – in a live YouTube presentation on March 19.

There are still plenty of puzzles to solve, but the free-flow of these kinds of ideas remains our best hope of ever getting a chance to visit those distant, twinkling stars.

“This work has moved the problem of faster-than-light travel one step away from theoretical research in fundamental physics and closer to engineering,” Lentz says.

“The next step is to figure out how to bring down the astronomical amount of energy needed to within the range of today’s technologies, such as a large modern nuclear fission power plant. Then we can talk about building the first prototypes.”

The findings are reported in Classical and Quantum Gravity.

Bacteria Can Use Plastic Waste as a Food Source, Which Isn’t as Good as It Sounds
Scientists Reveal The Most Distant Galaxy We’ve Ever Found
Are Your Cats Playing or Fighting? Researchers Think They Can Tell The Difference
Physicists Used Sound Waves to Give a Tiny Sun Its Own Kind of Gravity
Ripples in Space-Time Could Actually Reveal When Time Began