In the dimly lit spaces of our Solar System beyond Neptune’s orbit lies the Kuiper Belt. This a region between about 35 and 50 times further from the sun than the Earth, populated by icy bodies so sparsely distributed that they never had the chance to collide and merge into planet sized objects.

Pluto is the largest that we know of, but only just. And over the past two decades, telescope surveys have found a couple of thousand more ranging down in size to only a few tens of kilometres across.

The trouble is that most of the objects of that size or smaller are too faint to be spotted by telescopes. So it will be difficult to ever work out how many small but unseen bodies there actually are in the Kuiper belt. Now a new paper, published in Science, has used an ingenious method to help us find out.

This is important, because scientists believe Kuiper Belt objects are survivors from the Solar System’s birth, developing from a primordial cloud of dust and gas. That means that their size distribution could have a lot to tell us about how the material from which the planets grew was initially assembled.

Instead of counting the small Kuiper belt objects directly, the researchers behind the new study counted the craters made by the random sample of objects that have impacted the surfaces of Pluto and its largest moon, Charon.

That is already way below the telescopic detection limit for Kuiper belt objects themselves, but images from the flyby of NASA’s New Horizons mission in 2015 allow craters as small as 1.4 kilometres to be mapped.

Those must have been made by impacts of Kuiper Belt objects not much bigger than 100 metres in size. 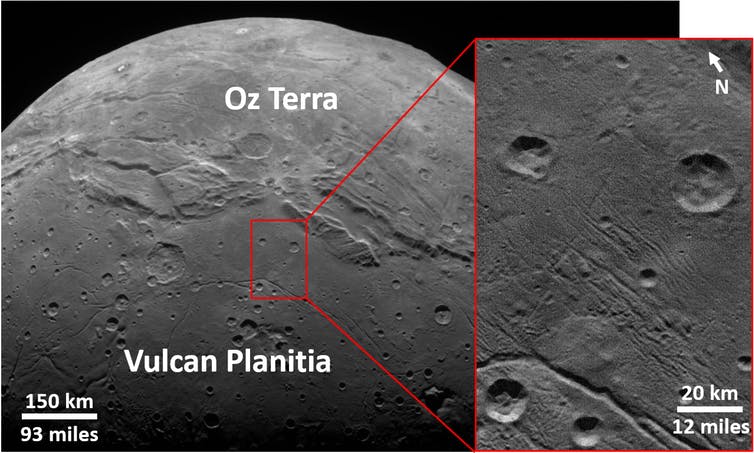 The researchers’ analysis shows that for craters of 13 kilometres or larger, on both Pluto and Charon, the frequency of impacts of various sizes seems to match with what would be expected from the known size distribution for Kuiper belt objects.

However, for smaller craters the abundance falls off dramatically, and so by implication must the abundance of the Kuiper Belt objects capable of making those craters.

The same does not happen for the well-documented asteroids that collide with the bodies in the region of Jupiter, Mars and Earth, nor is it consistent with theoretical models.

Interpretation of the most heavily cratered terrains led the researchers to rule out that the small craters have been erased by geological resurfacing such as cryovolcanic activity (eruptions of icy fluids) during the past four billion years.

This reinforces the conclusion that smaller craters were never made in the expected numbers, so there must be a mysterious corresponding deficit of Kuiper belt objects less than about 1-2 kilometres in size.

When the researchers, led by Kelsi Singer of the Southwest Research Institute in Boulder, Colorado, wrote their paper no one had yet seen a small Kuiper Belt object in detail.

However, New Horizons recently flew past a 30 kilometre long object known as 2014 MU₆₉ (more controversially nicknamed “Ultima Thule”) on January 1, and has now transmitted probably the best images we are going to get.

Sometimes described as “snowman-shaped”, it is a two-lobed “contact binary”, almost certainly formed by a merger of two round objects that happened so slowly and gently that neither component was deformed in the process.

But what happened before that? If you look at the larger of the two lobes, in particular, you can make out what looks like traces of component parts that merged vigorously enough to squish together into an approximate sphere, but with insufficient violence to smash each other apart. These ideas have inspired quirky new terms. “Blorping” refers to the collisional merging of material to assemble each of the lobes, and “flomping” describes the coming together when two lobes meet without causing any deformation.

More importantly, this could offer an insight into the processes that robbed the Kuiper belt of the smaller objects that would otherwise have impacted to make small craters on Pluto and Charon.

The relative lack of small Kuiper Belt objects may be because, instead of breaking each other apart in collisions, they tended to merge by blorping – eventually growing into objects like 2014 MU₆₉.

If this is correct, then when we try to count them, we see a record of growth rather than collisional fragmentation.

Orbital speeds are slower the further you get from the sun, so we would expect collisions to be less violent in the Kuiper Belt than in the inner Solar System.

But even so, a “blorp” event to fuse two lumps together rather than break them apart probably requires the ices that make up the bulk of their substance to be a lot less brittle and more squishy than we might have expected.

That is crucial information, as these lumps are made from the raw material that the Solar System formed from, shedding important light on its evolution.

These 5 Traces of Ancient Ancestors Still Exist in Human Bodies Today
New NASA Nuclear Rocket Plan Aims to Get to Mars in Just 45 Days
Dogs Can Be Aggressive For Lots of Reasons, And One of Them Is You
Scientists Create Shapeshifting Humanoid Robot That Can Liquefy And Reform
A Rare Green Comet Can Be Seen in The Sky, And It May Be Our Last Chance