For the first time, astronomers have seen a flash of light from the collision of two black holes.

The objects met and merged 7.5 billion light-years away, within a vortex of hot, swirling matter circling a larger, supermassive black hole.

This whirlpool is called the accretion disk, and it orbits a black hole’s event horizon – the point after which gravity is so powerful that not even light can escape.

That’s why scientists have never seen two black holes collide. In the absence of light, they can only identify such mergers by detecting their gravitational waves – ripples in spacetime created by the collisions of massive objects. 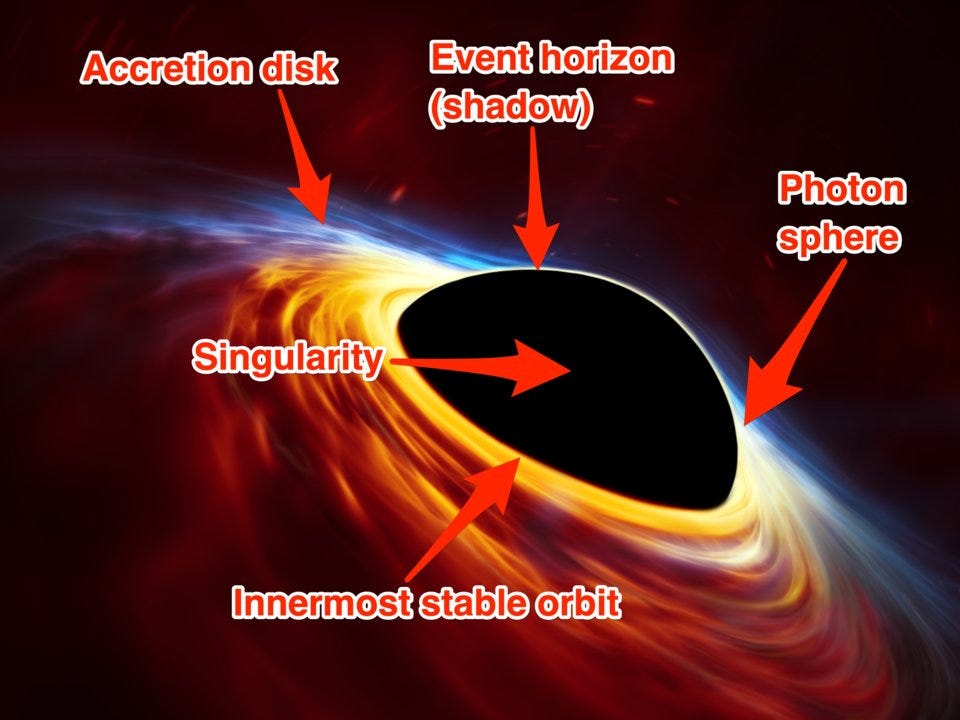 Above: An artist’s impression of a rapidly spinning supermassive black hole surrounded by an accretion disc. Key features of black holes are labelled in red.

Albert Einstein first predicted the phenomenon, but he didn’t think gravitational waves would ever be detected. They seemed too weak to pick up on Earth amid all the noise and vibrations.

For 100 years, it appeared Einstein was right. But in 2015, a pair of machines in Washington and Louisiana detected their first gravitational waves: signals from the merging of two black holes some 1.3 billion light-years away.

The discovery opened a new field of astronomy and earned a Nobel prize in physics for researchers who helped conceive of the project, called the Laser Interferometer Gravitational-Wave Observatory (LIGO).

Now, for the first time, scientists have matched a black-hole collision that LIGO detected to an eruption of light – something that previously seemed impossible, since black holes don’t emit any light.

Above: An animation shows two black holes merging into one large black hole.

The researchers think that once the two black holes merged together, the force of the collision sent the newly formed black hole careening through the gas of the accretion disk around the larger black hole.

“It is the reaction of the gas to this speeding bullet that creates a bright flare, visible with telescopes,” Barry McKernan, an astronomer on the California Institute of Technology team that captured the light, said in a press release.

The researchers published their findings in the journal Physical Review Letters on Thursday. They expect to see another flare from the same black hole in a few years, when it’s expected to reenter the accretion disk of the supermassive black hole.

“The reason looking for flares like this is so important is that it helps enormously with astrophysics and cosmology questions. If we can do this again and detect light from the mergers of other black holes, then we can nail down the homes of these black holes and learn more about their origins,” study co-author Mansi Kasliwal, an assistant professor of astronomy at Caltech, said in the release.

A ‘spectacular’ flare coincided with the gravitational waves

Both LIGO, which consists of two gravitational-wave detectors in the US, as well as its Italian counterpart, Virgo, sensed the disturbances in space and time in May 2019.

Just a few days after, telescopes at the Palomar Observatory near San Diego observed a bright flash of light coming from the same spot in the cosmos.

As the Caltech researchers later looked back through archival footage of that region of the sky, they spotted the flare-up. The light had slowly faded over a month. The timeline and location lined up with LIGO’s observations.

“This supermassive black hole was burbling along for years before this more abrupt flare,” Matthew Graham, a professor of astronomy at Caltech and the study’s lead author, said in the release.

“In our study, we conclude that the flare is likely the result of a black hole merger, but we cannot completely rule out other possibilities.”

The researchers did, however, rule out the possibility that this light came from routine explosions in the supermassive black hole’s accretion disk. That’s because the disk was relatively calm for the 15 years before this recent flare-up.

“Supermassive black holes like this one have flares all the time. They are not quiet objects, but the timing, size, and location of this flare was spectacular,” Kasliwal said. Above: This supercomputer simulation shows one of the most violent events in the universe: a pair of neutron stars colliding, merging and forming a black hole.

The detector shoots out a laser beam and splits it in two. One of those split beams is sent down one 2.5-mile-long tube, while the other goes down the identical, perpendicular tube.

The beams bounce off mirrors and then converge back near the beam splitter. When all is still, the light waves return at equal length and line up in such a way that they cancel each other out to the detector.

But when a gravitational wave hits Earth, it warps spacetime – briefly making one tube longer and the other shorter. This rhythmic stretching-and-squeezing distortion continues until the wave passes. When that happens, the two waves of light don’t wind up converging at equal lengths, so they don’t neutralise each other. That leads the detector to record some flashes of light.

Measuring those changes in brightness thus allows physicists to detect and observe gravitational waves that pass through Earth.

With the help of KAGRA, LIGO and Virgo scientists expect to narrow down the location of massive collisions with three times more accuracy. That would make it much easier for telescopes to confirm the collisions responsible for gravitational waves – and to spot the light they emit.

As the growing global gravitational-wave network detects more and more collisions with increasing precision, scientists will be able to learn more about the nature of these massive mergers.

Ancient Drains Under The Colosseum Reveal The Bones of an Unlikely Gladiator
Study Attempts to Unravel The Best Ratio of Land to Ocean For Exoplanet Habitability
Forests at Risk of Burning an Extra 30 Days a Year Without Climate Action
This May Be The Oldest Example of a Brain, And It’s Not What We Expected
We May Finally Know How Lightning Gets Its Zigzag Shape