One of the most breathtakingly beautiful sights our skies can muster is the dancing glow of auroral lights. Yet this fascinating phenomenon is still not fully understood.

We know it’s produced by particles blown in from solar storms, accelerated along Earth’s magnetic field lines to the higher latitudes, where they rain down into the upper atmosphere. There, interactions with the particles in the atmosphere generate curtains of light that shimmer across the sky.

Now, for the first time, scientists have demonstrated and confirmed the mechanism whereby the particle acceleration occurs – by replicating the process in a laboratory. Just as scientists had thought, powerful electromagnetic waves known as Alfvén waves accelerate electrons along the magnetic field lines.

“The idea that these waves can energize the electrons that create the aurora goes back more than four decades, but this is the first time we’ve been able to confirm definitively that it works,” said physicist Craig Kletzing of the University of Iowa.

“These experiments let us make the key measurements that show that the space measurements and theory do, indeed, explain a major way in which the aurora are created.” 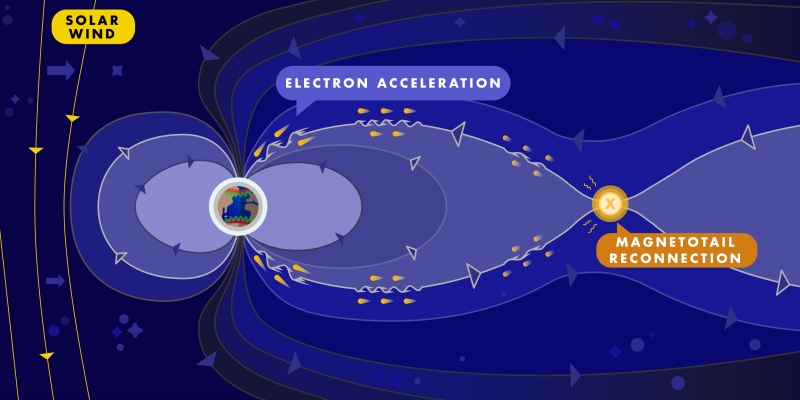 We’ve known about Alfvén waves for a long time. They were first described by Swedish electrical engineer Hannes Alfvén in 1942 – transverse waves in an electric fluid that propagate along magnetic field lines. Such waves are an important mechanism for the transport of energy and momentum in magnetohydrodynamic systems; that is, they can accelerate particles.

Alfvén waves have been observed in Earth’s magnetic field lines, and spacecraft have even observed Earthward Alfvén waves above auroras. It’s widely accepted that Alfvén waves play a role in auroral electron acceleration – but determining the exact role has been somewhat tricky.

So a team of scientists led by physicist Jim Schroeder of Wheaton College used the Large Plasma Device (LAPD) at the University of California Los Angeles to take a closer look at the phenomenon. This is a cylindrical vacuum chamber 20 meters long (66 feet) and 1 meter (3.3 ft) in diameter, with a powerful magnetic field.

“This challenging experiment required a measurement of the very small population of electrons moving down the LAPD chamber at nearly the same speed as the Alfvén waves, numbering less than one in a thousand of the electrons in the plasma,” said physicist Troy Carter of UCLA.

The team generated Alfvén waves in plasma in the LAPD, and simultaneously measured the electron velocity distribution, under conditions relevant to the formation of auroras. They found that the Alfvén waves transferred energy to electrons with a resonance with the waves – a velocity similar to the waves’ phase velocity.

“Measurements revealed this small population of electrons undergoes ‘resonant acceleration’ by the Alfvén wave’s electric field, similar to a surfer catching a wave and being continually accelerated as the surfer moves along with the wave,” said physicist Greg Howes of the University of Iowa.

This process is known as Landau damping, because the transfer of energy from the wave to the particle dampens the wave, which in turn prevents an instability from emerging. According to the team’s analysis, the signature produced by the electron velocity was the known signature for Landau damping, indicating that resonance acceleration had occurred.

By then comparing their results to a model aurora, the team was able to demonstrate that the energization rate of the electrons was consistent with Landau damping in the real thing.

“The agreement of the rate of energization per electron between the experiment and an auroral model,” the researchers wrote, “establishes the final connection needed to show we have provided direct experimental confirmation that Alfvén waves can accelerate electrons that precipitate into the ionosphere and generate the fascinating glow of the aurora.”

AI Predicts We’ll Breach Our Climate Goal in Just 10 Years
Physicists Used Sound Waves to Give a Tiny Sun Its Own Kind of Gravity
Stunning Green Comet Will Be Closest to Earth Today, at Peak Brightness
Ancient Goo Spills The Secrets of How The Egyptians Mummified Their Dead
The Mysterious Asymmetry of Jupiter’s Asteroids May Finally Be Explained