Every planet in the Solar System has its idiosyncrasies, but Uranus is, truly, one of a kind.

Not only is it tipped sideways so its rotational axis is practically parallel to its orbital plane, it smells terrible, it’s leaking everywhere, its magnetic field is an utter mess, and it has rings unlike any other planetary rings in the Solar System.

But wait, there’s more. Around 20 years ago, astronomers turned their instruments to capture X-ray emissions coming from Saturn, Uranus, and Neptune. Unlike every planet before it, Uranus had nary a flash to be seen.

Now, for the first time, we’ve detected X-rays emanating from the Solar System’s oddest ball, and it’s not quite clear where they’re coming from or what they mean.

Observations on and discoveries about Uranus – and Neptune, for that matter – are pretty tricky to make, compared to the rest of the Solar System. These two planets really are a long way away, and few probes have ever ventured into their icy neighborhood.

Generally, we rely on telescopes close to home to take a squiz at them – telescopes that are optimized for looking at things a lot farther away than Uranus or Neptune, and so the details can be a little fuzzy around the edges.

The new discovery is based on observations taken using the Chandra X-ray Observatory, a space telescope in orbit around Earth. The first set of observations was taken in 2002, then another two sets in 2017. When a team of astrophysicists led by William Dunn of University College London in the UK finally got around to analyzing the 2002 observation data, they found clear evidence of X-rays from Uranus. 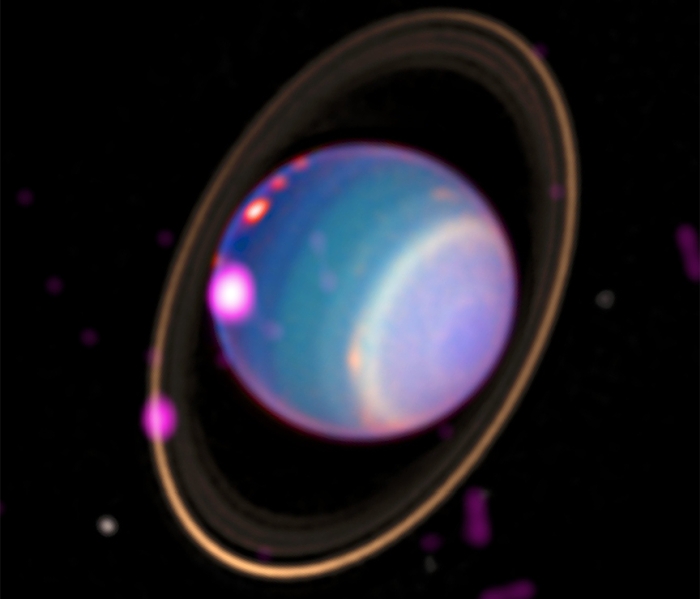 That Uranus should emit X-rays isn’t all that surprising; X-radiation has been detected emitting from many Solar System bodies, including comets, Venus, Earth, Mars, Saturn, Pluto, Jupiter, and even some of Jupiter’s moons. Nor is it surprising that we have not detected them until now, given the difficulties involved in studying the distant planet.

The odd part is that we don’t know the full picture of how Uranus is emitting X-rays.

There are a few options. Most of the X-radiation in the Solar System comes from the Sun (obviously), which is known to scatter when it hits Jupiter and Saturn’s clouds. This is also probably happening on Uranus, though the team’s calculations point to more X-ray photons than this process could account for.

Based on other objects in the Solar System, we have some clues as to what the potential source of this excess could be. Saturn’s rings are one such example, known to fluoresce in X-rays generated by energetic particles interacting with oxygen atoms in the rings.

Although Uranus’s rings are less showy than Saturn’s, radiation belt studies have found a higher intensity of energetic electrons around Uranus. If these were interacting with atoms in the rings, they could be producing a similar X-ray fluorescence.

Another process that produces X-rays in the Solar System is aurora. These occur when energetic particles interact with a planetary atmosphere. On Earth, this produces a breathtaking display of dancing green light in the sky, but they’ve been known to occur on other planets, too; Jupiter, Mars, Saturn and even comets can have auroras.

In most cases, a magnetic field plays a role in generating auroras; the particles are accelerated along magnetic field lines before being deposited in the atmosphere.

It’s possible a similar process is taking place on Uranus, generating auroras in the upper atmosphere. If it is, though, because Uranus’ magnetic field is such an off-axis mess, these auroras could be far more complex than any we’ve ever observed in the Solar System.

Longer Chandra observations in the future could help scientists map the locations of the X-ray emissions across Uranus, which would help figure out what is causing them. However, more detailed observations that could characterize fluctuations in the emission are not possible with our current generation of instruments.

Upcoming observatories, such as the ESA’s Athena, or NASA’s Lynx, will be better able to tell us what the hecketty is going on. That could help us not only better understand Uranus’s atmosphere and magnetic field, but gain a deeper understanding of X-ray sources across the Universe.

The team’s research has been published in JGR Space Physics.