When you get close to a blazing star, you can discern a region where medium-sized planets like our own icy Neptune are scarce. Known as Hot Neptunian Deserts, these rings of intense irradiation and heat are found right across the Universe – but they may not be as inhospitable as we once thought.

Like Icarus and his glued-on wings, astronomers have discovered a hot gaseous exoplanet flying far too close to its sun for comfort.

Nicknamed the ‘forbidden planet’, NGTS-4b is the first medium-sized exoplanet ever found in a Neptunian Desert; even at 1,000 degrees Celsius, its fragile envelope atmosphere has yet to evaporate.

“This planet must be tough – it is right in the zone where we expected Neptune-sized planets could not survive,” says Richard West, a physicist at the University of Warwick. 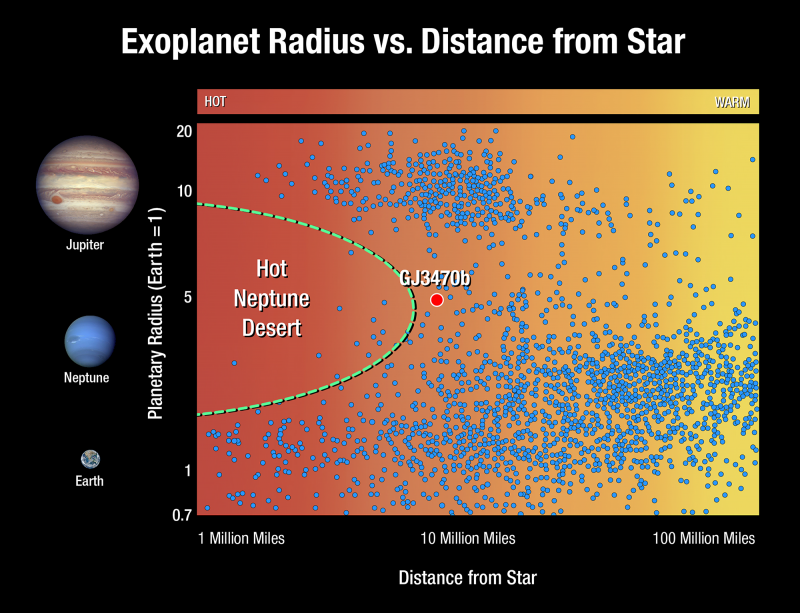 Three times the size of Earth and with a similar-sized orbit, the forbidden planet zooms around its star in less than 1.3 days, with a transit depth 30 percent shallower than anything else like it. This depth is how astronomers calculate the size of the exoplanet.

Narrow orbits like this are what makes exoplanets so difficult to find. When scanning the skies for new discoveries, astronomers usually look for a dip in the light of a distant star, because this is when an orbiting planet would be blocking the light.

Searches from the ground can usually pick up when a star dims by 1 percent or more, but using the Next Generation Transit Survey for 272 straight nights, astronomers have now picked up the smallest blip yet: a transit depth of just 0.13 percent.

“It is truly remarkable that we found a transiting planet via a star dimming by less than 0.2 [percent] – this has never been done before by telescopes on the ground, and it was great to find after working on this project for a year,” says West.

This rare and rogue oasis has left West and his colleagues wondering if the Neptunian Deserts are greener than we once thought. The researchers are now probing the desert for more, trying to figure out how these oases would survive.

“Hot Jupiters” and “Super-Earths”, which orbit very close to their stars, usually have missing upper atmospheres that have been blown off into space.

Even “Warm Neptunes“, which are usually found on the periphery of the desert, are thought to have started off as “hot Neptunes”, before losing too much hydrogen gas to evaporation.

The Forbidden Planet seems to break all these rules. Four-fifths the radius of Neptune and 1,200 degrees Celsius warmer, this super-tough alien world has somehow kept its gaseous envelope. Astronomers still aren’t sure why, but they do have a few ideas.

“NGTS-4b may have survived in the Neptunian Desert due to an unusually high core mass,” the authors suggest, “or it might have migrated to its current close-in orbit after this epoch of maximum stellar activity.”

The search is now on to find other examples, hopefully leading to a much clearer view of the Neptunian Desert and the limitations of planet formation.

A Gas Giant Exoplanet Has Been Discovered With Twice The Density of Earth
Bats Growl at Each Other Like Death Metal Singers And It’s Probably Not Out of Love
Massive Global Study Shows Belief in Witchcraft Is More Abundant Than You Might Think
Giant Asteroid Unleashed a Devastating Martian Megatsunami, Evidence Suggests
We May Finally Know How Lightning Gets Its Zigzag Shape