Scientists have long speculated that at the heart of a gas giant, the laws of material physics undergo some radical changes. In these kinds of extreme pressure environments, hydrogen gas is compressed to the point that it actually becomes a metal.

For years, scientists have been looking for a way to create metallic hydrogen synthetically because of the endless applications it would offer.

At present, the only known way to do this is to compress hydrogen atoms using a diamond anvil until they change their state. And after decades of attempts (and 80 years since it was first theorized), a team of French scientists may have finally created metallic hydrogen in a laboratory setting.

While there is plenty of skepticism, there are many in scientific community who believe this latest claim could be true.

The study which described their experiment, titled Observation of a first order phase transition to metal hydrogen near 425 GPa, recently appeared on the arXiv preprint server.

The team consisted of Paul Dumas, Paul Loubeyre, and Florent Occelli, three researchers from the Division of Military applications (DAM) at the French Alternative Energies and Atomic Energy Commission and the Synchrotron SOLEIL research facility.

Jupiter is thought to have liquid metallic hydrogen around its core (Kelvingsong/Wikimedia/CC BY 3.0)

As they indicate in their study, it is indisputable that “metal hydrogen should exist” thanks to the rules of quantum confinement. Specifically, they indicate that if the electrons of any material are restricted enough in their motion, what is known as the “band gap closure” will eventually take place.

In short, any insulator material (like oxygen) should be able to make become a conductive metal if it is pressurized enough.

They also explain how two advances made their experiment possible. The first has to do with the diamond anvil setup they used, where the diamond tips were toroid-shaped – a torus with a hole in the middle (like a donut) – instead of flat.

This allowed the team to be able to push past the previous pressure limit established by other diamond anvils (400 GPa) and get as high as 600 Gpa.

The second involved a new type of infrared spectrometer the research team designed themselves at the Synchrotron SOLEIL facility, which allowed them to measure the sample.

Once their hydrogen sample had reached pressures of 425 GPa and temperatures of 80 K (-193 °C; -316 °F), they reported that it began absorbing all the infrared radiation, thereby indicated that they had “closed the band gap”.

These results have attracted their fair share of criticism and skepticism, largely because previous claims where metallic hydrogen was said to have been created were either proven to be false or inconclusive.

In addition, this latest study has yet to be peer-reviewed and their experiment validated by other physicists.

However, the French team and their experimental results have some powerful allies. One person is Maddury Somayazulu, an associate research professor at the Argonne National Laboratory who was not involved in this study. As he said in an interview with Gizmodo:

“I think this is really a Nobel-prize worthy discovery. It always was, but this probably represents one of the cleanest and most comprehensive pieces of work on pure hydrogen.”

Somayazulu also expressed that he knows the study’s lead author Paul Dumas “very well”, and that Dumas is an “incredibly careful and systematic scientist.”

Another physicist who spoke positively of this latest experiment is Alexander Goncharov, a staff scientist from the Carnegie Institute for Science’s Geophysical Laboratory.

In 2017, he expressed doubt when a research team from Harvard University’s Lyman Laboratory of Physics claimed to have created metallic hydrogen using a similar process.

But as Goncharov told Gizmodo of this latest experiment:

“I think that the paper contains some good evidence about the band gap closure in hydrogen. Some of the interpretation is incorrect and some data could be better, but I generally trust that this is valid.” 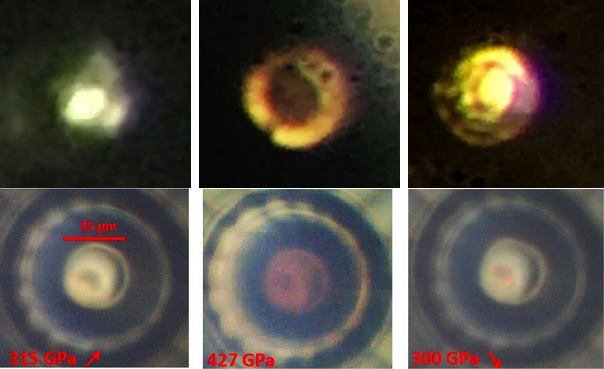 IMAGE: Top: microscopic images of the stages from the 2017 experiment by Dias and Silvera. Credit: Isaac Silvera; Bottom: The stage images provided by Dumas (et al.), the center image showing the formation of metallic hydrogen.

As a synthetic material, metallic hydrogen would also have endless applications. First off, it is believed to have superconducting properties at room temperature and is meta-stable (meaning that it will retain its solidity once it has been brought back to normal pressure). These properties would make it incredibly useful when it comes to the revolution that is already underway in electronics.

It’s would also be a boon for scientists engaged in high-energy research and physics, like what is currently being conducted at CERN. On top of all that, it would allow astrophysicists, for the first time ever, to study what conditions are like in the interior of giant planets without actually having to dispatch probes to explore them.

In this respect, metallic hydrogen is a lot like cold fusion. Given the immense payoffs, anyone who claims to have achieved it is naturally going to be facing some tough questions.

All we can do is hope that the latest experiments were successful, and either celebrate or wait for the next attempt.